The community contacted us with 22 reports of suspected little fire ants since July and our crew continues to follow up on reports of stinging ants and survey new locations but, despite collective efforts to find them, no new infestations of little fire ants have been discovered on Maui . This allowed MISC’s LFA crew to focus on stamping out the handful of active infestations on the island and to continue their monitoring of the rest.

In Happy Valley, there was only one positive sample out of 500 collected. This means the site moves into a spot treatment approach after one year of regular treatments.

Nearly 7,000 vials baited with peanut butter were deployed over the past 90 days in our never-ending quest to seek out and destroy these unwelcome beasts.  On the Hāna side, crewmember Joe Brower keeps his experienced expert eye on things at the two infestations on that side of the island.  This includes the aerial work that continues at Nāhiku where the ninth such treatment is scheduled for mid-September.

The Makawao-based crew led by Monte Tudor-Long, with Mikiʻala Puaʻa-Freitas, Betsy Black, and intern Paul Moneymaker, continue to execute the work at Maui’s two most recently discovered large sites: the 8+ acre infestations at Waiheʻe Valley and Twin Falls, with full-site treatments at both locations scheduled to wrap up in mid-October.  At that point, years of intensive monitoring will begin in order to ensure the ants are truly gone.  We are grateful to James Fleming and Raynette Inouye of the Hawaiʻi Department of Agriculture for their generous assistance at these and other LFA sites on Maui.

Current status of infestations on Maui and date detected:

October is the annual “Spot the Ant, Stop the Ant” campaign encouraging people to test around their homes for little fire ants. Follow the “Stop the Ant” page on Facebook and Instagram. Join in and submit ants from your yard: Collect and Submit Ants 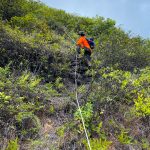