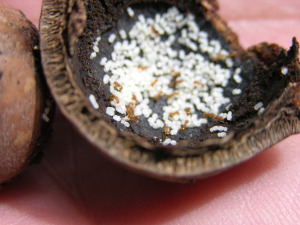 The little fire ant, Wasmannia auropunctata, is a pest with a deservedly nasty reputation. Alone, this wee ant is neither aggressive nor impressive, but with her sisters, living in a network of colonies stretching from tree-top to ground, she has a dramatic impact. Once established, little fire ants are more than a pest, they will put the kibosh on agriculture. Little fire ants have already shut down fruit orchards in the Hilo area and their establishment threatens agriculture throughout the state.

Little fire ants do not compete between colonies; rather, they cooperate, blanketing the ground and trees and outcompeting other ant species for food and resources. Other insects and animals may also be pushed out and end up abandoning highly-infested areas to the little fire ant.

As little fire ants find homes in bananas, citrus, rambutan, and coffee trees, farmers faced with new difficulties in harvesting their crops. Because the ants don’t hold on well to branches, scads of tree-dwelling ants rain down on workers become trapped in their clothing, and sting in self-defense. 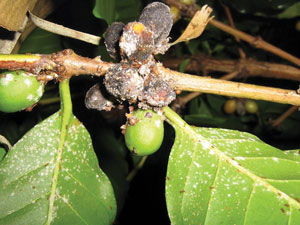 Stinging ants raining down upon harvesters is enough of an obstacle for coffee infested with little fire ant, but additionally, yields are reduced because little fire ants protect aphids that support plant disease, like this fungus. Photo by Cas Vanderwoude

In the Galapagos, little fire ants have made harvesting coffee one of the most difficult ways to earn a living; coffee harvesters now command a higher wage than other agricultural workers to compensate them for the aggravation. Increased costs affect farm profitability; in several areas of the Galapagos, coffee plantations lay abandoned because of the little fire ant. In Kona, the famed coffee-growing area, and elsewhere in the state, most coffee is harvested by hand. The spread of LFA into coffee plantations will be a huge blow to an industry already struggling to address the coffee borer beetle, another invasive pest that threatens the coffee industry as it reduces yields. 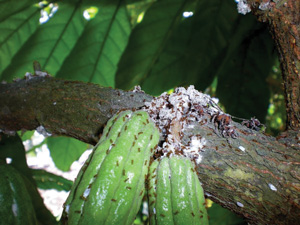 Cacao and other tree crops are particularly susceptible to little fire ant infestations. Photo used by permission from Cas Vanderwoude.

groves and in some areas practically blanket the ground.

The ants are causing havoc with other types of agriculture as well. Little fire ants cause blindness in animals and livestock, poultry, and pets in infested areas have a much higher incidence of blindness than do animals without LFA.

Controlling these ants is extremely difficult, especially for tree crops, as few pesticides are registered for use in trees and the bait must stick to branches long enough for the ants to find it. Existing control techniques rely on traditional pesticides; an effective organic method has yet to be developed.

As with any invasive species, preventing spread and establishment are the most cost-effective approaches.  Eradication is possible only if the population is small. Once established, these ants may be forever.  Little fire ants are widespread on the eastern side of Hawaii Island and beyond eradication in that area, but further spread throughout the state can be prevented. Help protect agriculture on Maui, as well as your own quality of life. Support efforts to prevent their movement between islands and quarantine and check any plants or soil you bring on to your property for little fire ants. Learn more at www.lfa-hawaii.org and www.littlefireants.com.

By Lissa Fox Strohecker. Originally published in the Maui News, May 13th, 2012 as part of the Kia‘i Moku Column from the Maui Invasive Species Committee.