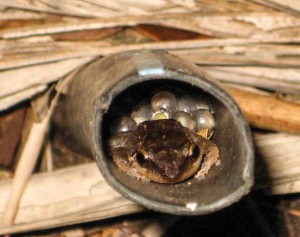 A male coqui guards a clutch of eggs inside a pipe. With coqui populations on the rise throughtout the state there is an increased likelihood of coqui inadvertently reaching Maui. MISC file photo

The call of the lone coqui may not be increasing in volume, but calls reporting coquis on Maui are on the rise.

There’s been a dramatic increase in coquis arriving on Maui. In 2013, 25 Maui residents reported the presence of these noisy amphibians, almost double the reports from 2012 and 2011 combined. And the trend seems to be continuing for 2014, with reports of these invaders popping up in surprising places across Maui.

Coqui frogs are known to be in a handful of scattered populations around the island. According to the Maui Invasive Species Committee, all are under control and on target for eradication, with the exception of Māliko Gulch in Ha‘ikū. But the influx of new arrivals has the MISC crew concerned.

“We interview homeowners when there are new frogs reported, but we haven’t found any clear source of introduction,” said MISC Operations Manager Adam Radford. “In general, there are more frogs in the state than there used to be.” As coquis increase in number, particularly on Hawaii Island, so do the chances that the notoriously loud hitchhikers will spread elsewhere.

If you have heard a coqui, you know why they are not a welcome addition to your neighborhood. A single male frog has an 80- to 90-decibel screech, as loud as an alarm clock or freeway traffic. The frogs call from dusk until dawn. Coquis arrived in Hawai‘i sometime before 1988. In the absence of predators or competitors, their numbers ballooned, reaching densities exceeding 36,000 frogs per acre – two to three times greater than in their native range in Puerto Rico.

The coquis’ ear-splitting chorus may be the most obvious impact of this invasive species, but recent research suggests there are secondary, less-apparent consequences to allowing these quarter-sized pests to become established. Researchers have long known that coquis eat invertebrates such as insects, spiders and worms, but they recently discovered how these invasive amphibians skew the ecosystem in Hawai‘i.

What goes in must come out. The coqui frogs’ most significant change to the landscape is through the increased nutrient input from their droppings. While this sounds like a good thing, altering nutrients can create an environment more hospitable to non-native species. 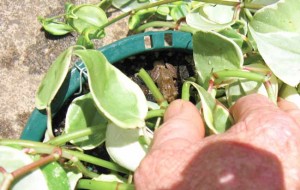 This coqui was discovered by an observant Maui resident, hiding in a potted plant recently purchased from a garden shop. MISC file photo.

Unfortunately, the coqui frog is widespread on Hawai‘i Island and cannot be eradicated. There, residents work together to control frogs in individual neighborhoods, and nurseries bathe plants at a hot water treatment facility before shipping stock off island. Barriers around parking lots prevent frogs from moving between cars and the areas surrounding the lot. But in the big picture, these stop-gap measures only will provide a temporary respite. We can prevent this from happening on Maui. With only one significant population in Māliko Gulch, land managers believe that the frogs can be eradicated, and new infestations thwarted.

You can help. Report coqui frogs to the Maui Invasive Species Committee at 573-6472. Support business and landscapers who take steps to prevent the spread of coquis via the plant trade. And, find a list of certified coqui-free businesses at coquifreemaui.org. For more detailed information about recent research on impacts of coqui, check out the coqui frog information page under priority pests at mauiinvasive.org.

By Lissa Fox Strohecker. Originally published in the Maui News, August 10th, 2014 as part of the Kia‘i Moku Column from the Maui Invasive Species Committee 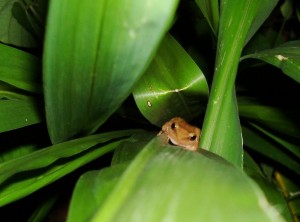 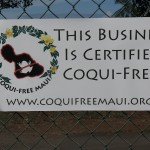 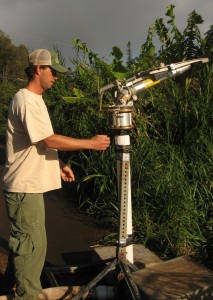