They saw the pitchfork leaf pattern and knew something was amiss. The unmistakable smell 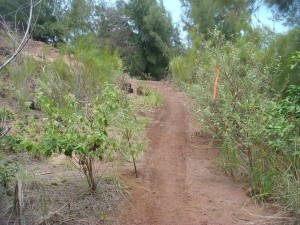 Devil weed, or Chromolaena odorata growing along a trailside in the Kahuku Motocross Riding Area. This invasive plant is new in Hawaii and only known to be in the Kahuku area. Photo courtesy of Oahu Army Natural Resources Program.

of turpentine in a crushed leaf only added to concern.  In January of 2011, a field crew with the O‘ahu Army Natural Resources Program (OANRP) was searching roadsides of the Kahuku training area on the north shore of O‘ahu. They noticed an unusual plant they had not seen before. Could it be devil weed? They sent a sample to specialists with the O‘ahu Invasive Species Committee. Their suspicions were confirmed. Devil weed, or Chromolaena odorata, lives up to its name: it has earned a place on the Invasive Species Specialist Group’s list of the worlds’ 100 worst invaders, alongside coqui frogs and brown tree snakes. The diabolical weed has already invaded Southeast Asia, parts of Africa, and Guam, and has now made to Hawai‘i. 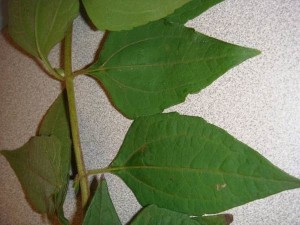 The pitchfork pattern found in the veins on the leaf of devil weed is a key feature of the plant. Photo courtesy of Oahu Army Natural Resources Program.

Native to North America, devil weed is not a pest in its home range, possibly kept in check by natural enemies. Found throughout Florida, Texas, Mexico, and the Caribbean, it attracts butterflies and bees with its fragrant flowers and goes by the much more innocent name of Jack-in-the-bush or blue mistflower. But elsewhere around the world, devil weed causes despair.

A pest in fields, pastures, and wilderness areas, this tangled shrub is fast growing and fertile, covering a foot each week a day. A single plant can make 800,000 seeds. Not surprisingly, it quickly smothers crops and native vegetation. Toxic to animals, it takes over pastureland as well. The bitter oils in the plant that render it toxic are volatile and infestations of this pest fuel wildfires. As devil weed rapidly invades disturbed areas, a fire cycle begins. In Hawai‘i , where ecosystems are not adapted to regular fires and native plants do not regenerate as fast as some invasive species a cycle of fire can mean the end of native habitat, particularly on the leeward sides of the islands.

Best estimates indicate that devil weed is a recent arrival; surveys in the area in 2009 and 2010 did not detect it. Today it is scattered over 900 acres of the Kahuku training area. Julia Parish, the manager of the O‘ahu  Invasive Species Committee (OISC), says it’s possible to eradicate Kahuku populations, “But there’s a high risk for reintroduction on private vehicles coming in from across the Pacific region.  [U.S.] Customs regularly intercepts Chromolaena on contaminated equipment and vehicles.” 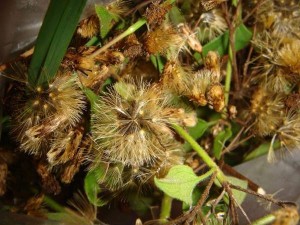 A single devil weed plant can produce up to 800,000 tiny seeds that are easily spread in mud and equipment. Photo courtesy of Oahu Army Natural Resources Program.

The Kahuku training area is the weekend home of the KahukuMotocrossPark, and 400 acres of trails weave through the area. Kahuku is also popular with hunters and dirt bikers. OISC has been working closely with the Hawai‘i  Motocross Association to get the word out about this demon to prevent further spread. According to Parish, “There is an extremely high likelihood of Chromolaena being on other islands.” Bikes move between islands for competitions. The tiny seeds can easily move in the mud on tires or boots.

Finding devil weed early can be tricky, as it resembles other plants.  Look for a shrubby plant, 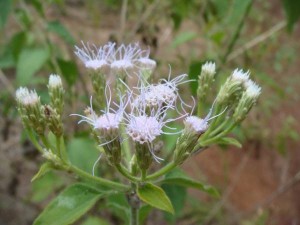 Flowers of devil weed can be lilac to white in color and often have a tangled appearance. Photo courtesy of Oahu Army Natural Resources Program.

sometimes sprawling, with very-triangular leaves, serrated at the edge. The leaf veins form a distinguishable pitchfork pattern and have a turpentine-like smell when crushed.  The stems are covered in short soft hairs and older stems are woody. Single flowers resemble a tangled lilac puffball and flowers grow in clusters. The Seeds have a feathery parachute to carry them on the wind.

You can help prevent the introduction of devil weed and other invasive plants. Always clean hiking and sports equipment, and vehicles and gear before bringing them interisland–even between different areas of the island–particularly if covered in soil or mud.  Not only will you help prevent the spread of invasive species, your gear will last longer. If you suspect you may have seen devil weed on Maui, call MISC at 573-6472 or email miscpr@hawaii.edu. On other islands call your island-based invasive species committee.

By Lissa Fox Strohecker. Originally published in the Maui News, August 8th, 2013 as part of the Kia‘i Moku Column from the Maui Invasive Species Committee.