Gold dust day geckos are here to stay. These colorful 5″ long lizards are increasingly widespread on Maui and nothing to worry about. They can be distinguished from other lizards by the sprinkling of gold dust along the side of their necks.  Photo by Eric Sonstroem, Flikr.

Geckos are ubiquitous throughout the Hawaiian Islands today, but that was not always the case. Though lizards can colonize islands by clinging to drifting trees and plant material, the Hawaiian archipelago’s extreme isolation in the middle of the Pacific Ocean likely prevented any terrestrial reptiles from reaching our shores. It was only after humans arrived in Hawaiʻi that reptiles and amphibians found passage aboard canoes, ships, and eventually planes. Thus began the waves of introduced geckos, skinks, frogs, and chameleons that came and spread throughout the Islands.

Though it may be impossible to measure the impact these small lizards had, the arrival of voracious, insect-eaters in an ecosystem that evolved over millennia without lizards or amphibians would inevitably result in a decline in native insects. This is problematic for Hawaiʻi, which has tens of thousands of unique invertebrates—many of which exist nowhere else on Earth and have yet to be described by science. 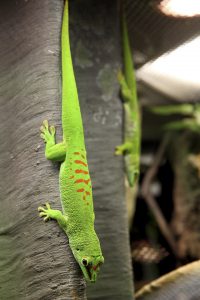 The giant Madagascar day gecko was illegally introduced to the state. Any sightings of the large 12 inch long moʻo should be immediately reported to the Hawaii Department of Agriculture at 643-PEST (7378). Photo by MrTinDC, Flikr.

The eight Polynesian-introduced geckos and skinks are still present in Hawaiʻi, but a few recent introductions have stolen the spotlight. Common house geckos only showed up in the last 60 years or so. They most likely hitchhiked to Hawaiʻi in the 1940s in cargo moved around the Pacific. Aggressive and territorial, they’ve outcompeted mourning geckos and others for the prized perch near the porch light.

An even newer arrival seems to be outcompeting the house gecko: the gold dust day gecko. This exotic, 5-inch long lizard is hard to miss: it appears to be dressed for Mardi Gras in brilliant green with bright blue eye shadow, red markings across its nose and at the base of the tail, and a sprinkling of gold spots dusted along back of its neck. Active primarily during the day, this gecko is native to Madagascar and small islands off the coast of East Africa.

Rather than arriving as a stowaway as other geckos and skinks have, the gold dust day gecko was illegally smuggled in and released. The entire Hawaiian population stems from only eight lizards a University of Hawaiʻi student released near the Mānoa campus in 1974. Shortsighted lizard enthusiasts intentionally dispersed the geckos, which then colonized new areas on their own. Maui residents began seeing gold dust day geckos creeping around Kīhei in the mid 90s. The lizards now populate landscaped yards throughout South and Central Maui and are becoming common Upcountry.

Gold dust day geckos eat insects: cockroaches, ants, flies, beetles, and spiders, but they also have a sweet tooth and lap up nectar from flowers or juice from ripe fruit. To date, they occupy roughly the same areas as other geckos, but the newcomer’s impact isn’t entirely understood. Their omnivorous diet may give them an advantage. While the colorful lizards seem harmless, they could be pressuring native ecosystems in ways not yet identified.

Orange spotted day geckos are another lizard to be on the lookout for. They are about 7 inches long and do not have the gold dust along their necks, rather have powder blue markings on their back amidst a pattern of orange bars. Photo by Herr Olsen.

While it’s too late to address the gold dust day gecko on Maui, there are two more species of day geckos to look out for. Both were illegally imported, and are only found in a few places on O’ahu. The orange-spotted day gecko and the Madagascar giant day gecko are both green with red markings, but lack the gold dusting. The orange spotted day gecko is slightly bigger than its gold-dusted cousin, reaching 7 inches in length, and the giant day gecko is a whopping 10-12 inches including tail. Any sightings of these new lizards should be reported immediately to the Hawaiʻi Department of Agriculture’s statewide pest hotline at 643-PEST or online via the Report A Pest website at 643PEST.org

Written by Lissa Strohecker. Originally published in the Maui News on January 10th, 2016 as part of the Kia‘i Moku Column from the Maui Invasive Species Committee.