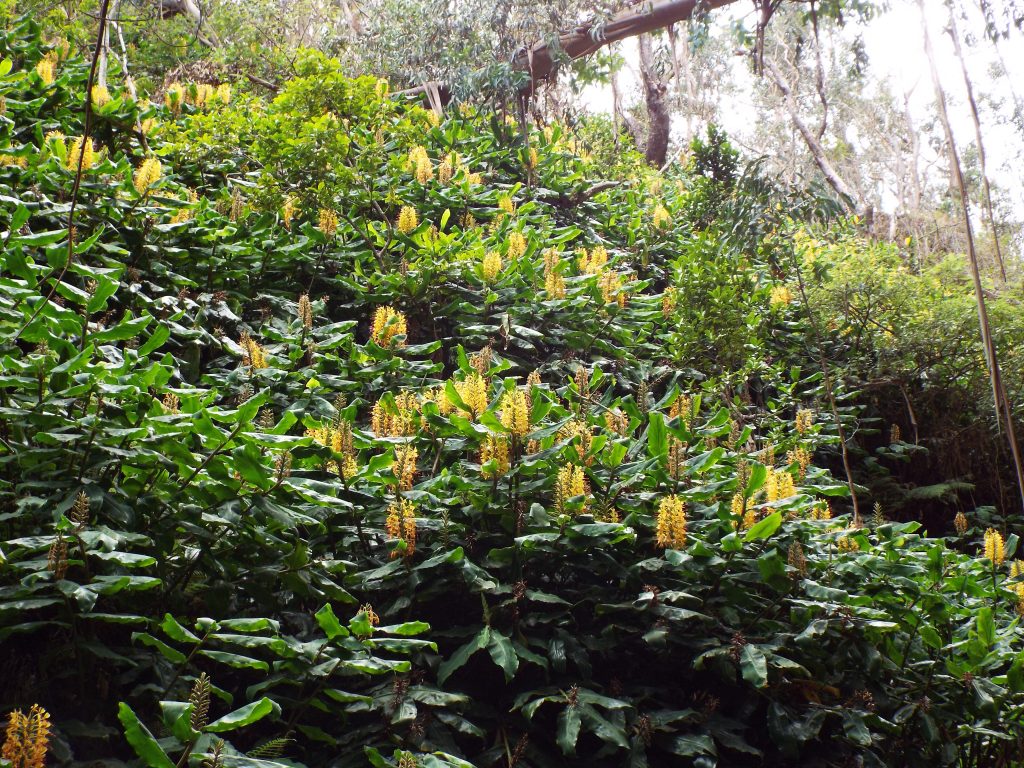 Though not invasive in India where it is native, Himalayan ginger can completely transform a Hawaiian rainforest like it has in this section at 4,000-foot elevation above Haiku. Inset: Ginger fruits are spread long distance by birds and rats. FOREST and KIM STARR photo

The subtropical rainforests in the foothills of the Himalayan Mountains are amazingly diverse. In sections of India and Nepal, the forests are similar to Hawaiian rainforests in both temperature and rainfall-but the flora and fauna are radically different: this is the land of elephants and red pandas; 600 species of butterflies live here and over 400 species of orchids. But amongst the exotic plants there is one 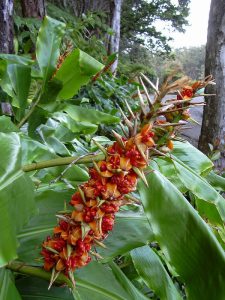 The fruit of Himalayan ginger is a tasty treat for non-native birds, but this means the seeds are spread throughout the forest. Photo courtesy of Forest and Kim Starr.

that might be familiar to residents of Hawai’i-a yellow-flowered ginger that covers vast sections of Hawaiian rainforests.

Himalayan ginger, Hedychium gardnerianum, is native to the Himalayan foothills. There, it evolved over millennia supporting a diversity of species: the sweet nectar is a food for the long-tongued butterflies of the region and the plant lives in harmony with the species that surround it. Yellow flower stalks dot the landscape amongst hundreds of other orchids, gingers, ferns, and trees.

But in Hawai’i, Himalayan ginger dominates the landscape-growing fast and paving its way into the forest in an unrelenting march.

Introduced as an ornamental, Himalayan ginger escaped backyards and began invading rainforests of East Maui in the mid 1950’s. With seeds dispersed far and wide by birds and rats, the weedy plant spreads by leaps and bounds into the forest. Today, much of the mid-elevation rainforest of East Maui is a patchwork of native forest and alien ginger. But there is a lot left to protect: many ginger-free areas remain, including most of West Maui.

Ginger is a formidable foe and removing the plant is no simple task. Roots pave the forest floor like asphalt and every part of the rhizome must be removed. Bagged rhizomes take years to decay and if there is the slightest hole in the bag, hardy shoots emerge. If using herbicide, every portion of the root has to be treated. Plants on steep slopes and cliffs are inaccessible and impossible to remove until the weight of the water-logged roots causes entire sections to collapse in a landslide.

Why would ginger be a pest in one place but not another? 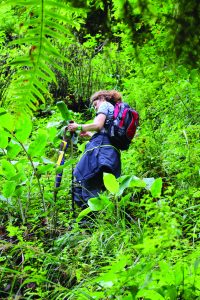 Djami Djeddour, weed biocontrol scientist with the Centre for Agriculture and Bioscience International, inspects a lone Himalayan ginger plant in India while searching for insects and fungi that live on the plant where it is native. These insects may be responsible for keeping the plant in check. DJAMI DJEDDOUR photo

The answer to that question is on the minds of resource managers in Hawai’i as well as New Zealand, Australia, and South Africa where the plant is invasive. With funding from organizations like TNC and the Hawai’i Invasive Species Council, research scientists traveled to India and collected insects and fungi that live on Himalayan ginger hoping to discover what keeps the fast-growing herb in balance there. An effective natural enemy could be a game changer for Hawai’i.

An effective natural enemy wouldn’t eliminate the plant, just bring it into harmony with the surrounding environment, much like it is in India and Nepal.

One of the most promising insects is a Cloropid fly that lives only on Himalayan ginger. The larvae live inside the stem stunting the growth and reducing flower production. Ginger natural enemies may be ready for release in New Zealand soon, promising progress for Hawai’i.

“The Nature Conservancy had been doing ginger work in Waikamoi for over 30 years, systematically conducting ginger control—containing the core population at the western edge of Waikamoi and eradicating outliers in native forest,” explains Cohan. Crews with Haleakala National Park work on the flowering pest in Kīpahulu Valley but the plant is widespread and thrives unchecked in wet places throughout the state.

There are ways you can help. Consider what you call the plant: though known for years as kāhili ginger, a pest destroying the rainforest does not deserve a moniker reminiscent of Hawaiian royalty much less one that might suggest that it belongs here. Perhaps call it toilet-brush ginger, as suggested by Pat Bily of TNC after years of removing it. Do not plant Himalayan ginger in your yard and remove it from your property before it spreads. Finally, participate in The Nature Conservancy’s quarterly volunteer trips removing ginger from Waikamoi Preserve. Contact hike_waikamoi@tnc.org if interested.

This article was originally published in the Maui News on April 8th, 2018 as part of the Kia‘i Moku Column from the Maui Invasive Species Committee.