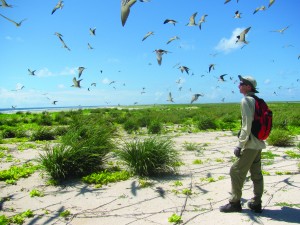 Laysan, a remote island in the Northwest Hawaiian Islands, is a refuge for seabirds. Strict decontamination protocols protect these islands from non-native species. Photo courtesy of Forest and Kim Starr

Stretching 1,200 miles across the Pacific, past Kaua‘i and Ni‘ihau, lies a sting of tiny islands and obscure atolls ringed by coral reefs. Though the total land area occupies only six square miles, the Northwest Hawaiian Islands host over 14 million nesting seabirds and provide the only habitat for four endangered land birds. The extreme isolation of the islands, and hence the relative lack of human presence, mean the Northwest Hawaiian Islands serve as critical refuges for the  survival of coastal plants and animals now threatened or no longer present on the main Hawaiian Islands. But human presence has not been entirely lacking—military and private interests, and the plants and animals carried along, have left a lasting legacy on the islands.

Introduced species can have dramatic and devastating effects on the plants and animals that have evolved to live in such remote isolation, and the isolation can affect the way these species behave. Take the big-headed on Kure Atoll, which probably arrived as a stowaway with human cargo. On the main Hawaiian Islands and nearby islets, big-headed ants are a pest, but don’t seem to cause a measurable reduction in fledgling success of seabird chicks. Not so on Kure, where the density of these ants is five times greater than it ever was on Moku‘auia islet off O‘ahu before biologists eradicated the ant.  The ants are so numerous on Kure they attack everything they encounter, including seabird hatchlings.

On Laysan, the intentional release of rabbits in 1902 caused the extinction of numerous plants and animals and three species of land birds found nowhere else in the world. The rabbits have since been eradicated and the atoll is still home to a number of endemic species, including the Laysan duck, a bird once widespread in Hawai‘i.

Lessons learned from the intentional and accidental introduction of non-native species have shaped the management practices for travel today. To protect some of the last remaining examples of intact native coastal habitat in Hawaii, along with millions of 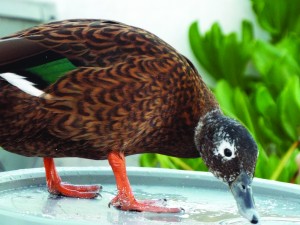 The Laysan duck is a small dabbling duck that nearly went extinct due to invasive species. Today it is found on three of the Northwest Hawaiian Islands. Photo by Forest and Kim Starr

seabirds, land birds, and insects that live there, natural resource managers have taken steps to prevent hitchhiking plants and insects.

University of Hawai‘i early detection specialists Forest and Kim Starr know the drill. They have visited most of the islands in the Northwest Hawaiian Islands, conducting surveys of native and non-native birds, plants and insects. They’ve gone through rigorous preparations to ensure they’re not bringing unwelcome guests with them. In September 2013, the Starrs traveled to Laysan, one of the islands with the greatest levels of protection.  “Everything, from boots and tents, down to the fabric sunglasses retainers has to be new,” Kim said, in accordance with procedures established by the Papahānaumokuākea Marine National Monument.

They freeze everything they pack for 48 hours to kill any insects or larvae and help sterilize any overlooked seeds. The strict decontamination protocols help prevent the spread of 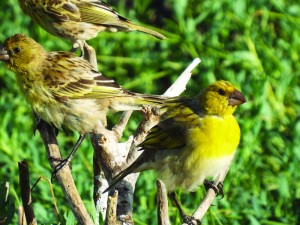 Once found on the main Hawaiian Islands, The Laysan Finch is only found on a handful of atolls in the Northwest Hawaiian Islands. This ground-nesting finch is extremely vulnerable to introduced species like rats and ants. Photo courtesy of Forest and Kim Starr

biological material from the main Hawaiian Islands to these spectacular but vulnerable atolls. “Fewer people have been to Laysan than Everest,” explains Kim. Even food is restricted on the more isolated islands. Fresh fruit and vegetables are not permitted and food not in cans or jars must be frozen for 48 hours as well. All gear must be packed in plastic tubs and buckets, as cardboard or wood can harbor insect larvae.

To maintain some of the healthiest intact reefs in the world, divers must rinse all their gear in a mild bleach solution to remove fragments of invasive algae. Boats and ships must maintain clean hulls and exchange ballast water at sea. And all vessels must be free of rodents—one of the single greatest threats to ground nesting seabirds.

To protect the species found on the Northwest Hawaiian Islands, rigorous protocols help prevent “forward contamination.” Every island in Hawai‘i is unique; each has species found only on that island. You can protect the rare species of your island by taking simple measures to prevent spreading invasive species. Make sure potted plants and cut flowers are inspected by the Hawai‘i Department of Agriculture before you carry them interisland and that soft gear, like tents, boots, even the cuffs of your pants are free of seeds, insects, and other hitchhikers. To learn more about the Northwest Hawaiian Islands, look online at www.papahanaumokuakea.gov.

By Lissa Fox Strohecker. Originally published in the Maui News, February 9th, 2014 as part of the Kia‘i Moku Column from the Maui Invasive Species Committee.