After 27 years of working with the Department of Land and Natural Resources, aquatic biologist Skippy Hau has become pretty familiar with Maui’s streams and the creatures dwelling in them. But there are always surprises. Several years ago, Hau discovered hīhīwai, one of two species of native Hawaiian freshwater snails, crawling single file up the cement bottom of a channeled stream next to a West Maui grocery store. The stream is typically dry, with few rocks to shelter the hīhīwai, but there they were. 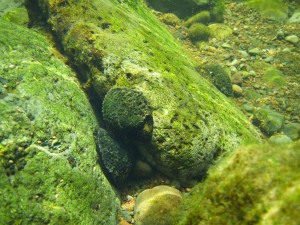 This hīhīwai, a native Hawaiian snail, clings to a rock in a Maui stream. The presence of slow-movnig hīhīwai can indicate the frequency and quantity of water needed for a healthy stream.

It’s amazing that Hawaii has any native freshwater species to begin with. Streams in Hawai‘i are 2,400 salty miles away from the nearest continental sources of freshwater. Yet fish, crustaceans and mollusks colonized island waterways well before the first Polynesians arrived, most evolving into species found no where else in the world. These animals have evolved to cope with intermittent stream flow and climb waterfalls. ‘Ōpae kala‘ole, an endemic crustacean, is the best climber of all, known to scale 100-foot cascades. But like other native Hawaiian plants and animals, these riparian creatures now face threats from introduced species.

Invasive armored catfish have added the eggs of the native ‘o‘opu (goby) to their diet. Guppies and mosquito fish devour Hawaiian stream dwellers’ larvae and contribute to the decline of native damselflies at low elevations. Swordtails and other non-native aquatics spread new diseases to native fish. Tilapia compete with native water birds for food and released pet turtles dine on ‘o‘opu. 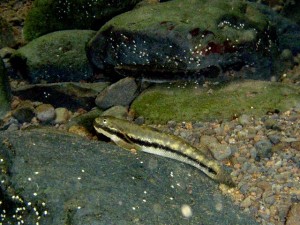 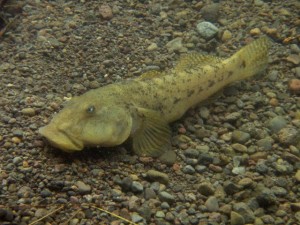 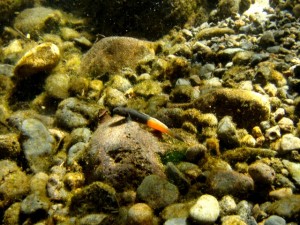 Most of these invasive species were intentionally introduced – starting with Asian immigrants bringing in Chinese catfish, rice-paddy eels and other species for food in the 1800s. Mosquito fish, or topminnows, were released into streams from the 1900s through 1960s to control mosquitoes. This was an era when state officials frequently introduced game species, such as trout, bass and tucunare, or peacock bass, into streams. During the 1970s, managing resources for native species became more important; game fish are no longer introduced.

In the 1980s and ’90s, aquarium fish and mollusks began appearing in Hawaiian streams. In addition to guppies and swordtails, a variety of cichlids and ramshorn snails now snack on larvae of native stream animals returning to the ocean. Aquarium owners who dump unwanted pets are the most likely source of this problem, which is ongoing.

Hīhīwai, like all Hawaiian stream dwellers, are only part-time residents. They spend the first year of life in the ocean, then ascend single file into a freshwater stream. Not all make it as they colonize the stream’s upper reaches, instead becoming a source of food for other riparian species. In addition to the hīhīwai, another native mollusk, five species of fish and two crustaceans spend a part of their lives in the ocean. During rare flood events, these freshwater animals move quickly upstream for the less salty part of their lives, finding shelter in upper elevation pools.

Hau regularly monitors the slender tributary of ‘Iao where he first witnessed the climbing snails. When it exceeds a trickle, he dons a snorkel mask and peers under rocks for slow-moving hīhīwai. By carefully studying Maui’s streams, Hau has documented the frequency and volume of water necessary for our native freshwater animals need to move between ocean and stream.

These remarkable aquatic animals need our help. Don’t release unwanted pets into streams. If your fish is too large for your aquarium, contact a local pet store. They often take back fish and snails. Consider selling or gifting your unwanted fish or turtle online or to a friend.

Learn more about the fascinating animals in Hawaii’s streams and how to help protect them at hawaii.gov/dlnr/dar/streams.html.

By Lissa Fox Strohecker. Originally published in the Maui News, June 10th, 2012 as part of the Kia‘i Moku Column from the Maui Invasive Species Committee.
You can find all the articles in the Kia‘i Moku series http://www.hear.org/misc/mauinews/