­­Achieving balance–in your workplace, at home, on your surfboard, or with your checkbook—makes life manageable. Natural environments depend upon balance as well.

Invasive pests have been disturbing the natural balance of Hawaiian ecosystems for centuries, ever since the arrival of the rat with early Polynesian explorers. Bringing invasive species into better balance with the environment is nothing new here in Hawai‘i.  An effective biological control, or natural predator, can transform a devastating invasive species into a mild pest. 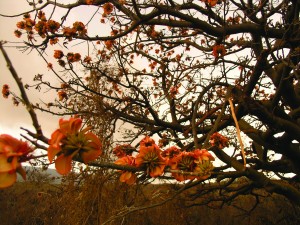 The invasive Erythrina gall wasp that threatened the native wiliwili trees, such ans this one, was brought into balance by a parasatoid wasp.

The vast majority of biological control efforts in Hawaii have been successful: pānini cactus that once choked pasture land is now checked by three predatory insects and a plant fungus; white loosestrife or pāmakani is continually attacked by two insects and another plant fungus; and recently, the Erythrina gall wasp, that wiped out ornamental coral trees and threatened the native wiliwili with extinction, was leveled by a parasitoid wasp.

Yet, just as impulsive actions sabotage balance in our own lives—think diet fads and over-exercising–the same kind of recklessness results in greater instability in our environment.

Such is the case with the small Indian mongoose, Herpestus javanicus. In 1872, a sugar planter released nine mongoose on Jamaica with the hope it would control rats in cane fields.  The planter considered it successful and published a paper about it. Mongoose populations grew and offspring were sold to plantations throughout the Caribbean, Cuba, and Puerto Rico. In 1883, Hawai‘i plantation owners jumped on the mongoose bandwagon. With little regard for potential impacts, the now defunct Hilo Planters Association released seventy-two mongoose from Jamaica in Hilo. Another batch of mongoose from eastern India was brought to the Hāmākua coast in 1885. Subsequent offspring were released on Maui, O‘ahu, and Kaua‘i. For an unknown reason the crate delivered on Kaua‘i was kicked off the dock. To date mongoose have not established on Kaua‘i, though a single female was found killed by a car in 1972. 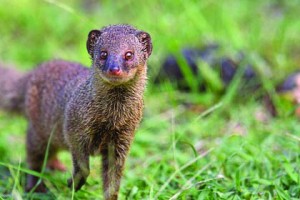 The mongoose is an opportunistic predator, introduced to Hawaii in 1883 with little regard to potential impacts on species other than the rat. Today, a potential biological control goes through years of testing to ensure it will have no unanticipated impacts.

Mongoose do eat rats, in Hawai‘i and elsewhere, but mongoose are opportunistic predators eating primarily insects, with birds, eggs, and a handful of plants mixed in. Additionally, mongooses are active during the day, rats at night.  The introduction of the mongoose further tipped the balance of the environment in the wrong direction: now both mongoose and rats threaten populations of native birds, particularly ground-nesting species like nēnē and petrels.

The mongoose introduction was not an example of classical biological control; it was an impulsive, untested whim. Today, when researchers look for biological controls for a particular pest, they survey the pest’s native habitat for species that counteract the pest’s invasive characteristics. Before any new organisms are introduced in Hawai‘i, they are subjected to intensive testing in quarantine to determine potential impacts on any other species.

Successful candidates for biological control have evolved over millennia alongside their target; some are dependent solely on the target species for survival. For example, the Eurytoma wasp that saved the wiliwili will die without access to Erythina gall wasps.  Consequently, Eurytoma populations will stop short of entirely eliminating the Erythrina gall wasp. Rather it will restore balance, keeping the pest wasp in check.

When mongoose were brought to Hawai‘i, there were no restrictions on plant and animal imports. Impacts on other species were an afterthought, if considered at all. It wasn’t until King David Kalākaua enacted the “Laws of the Hawaiian Islands” that any regulation existed to limit the introduction of new species to Hawai‘i.

Biological control has a long and successful history in Hawai‘i. In fact, California and Hawai‘i lead the world in successful releases of natural predators. Ever since testing of biological controls began, there have been no incidences of “host-jumping” or biological controls attacking other species.  Yes, the infamous mongoose ran amok, but it arrived during an “anything goes” era in Hawaiian history. The mongoose–or any opportunistic predator–would never be considered suitable for introduction by today’s standards. Biological controls are an important tool—sometimes the only tool—that can restore balance in Hawaiian ecosystems.

Originally published in the Maui News, April 8th, 2012 as part of the Kia‘i Moku Column.
You can find all the articles in the Kia‘i Moku series http://www.hear.org/misc/mauinews/