In Hawai‘i, habitat loss and invasive species have left little room for native plants and animals. And feral cats and dogs attack seabirds. Rats and mice steal eggs from endangered birds and snack on the seeds of rare plants. Introduced snails and chameleons have munched rare native tree snails close to oblivion. 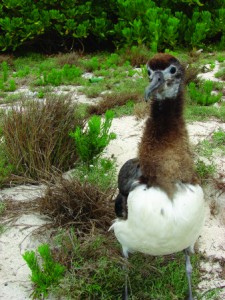 Albatross chicks, like this one on Midway, are becoming an increasingly common sight on O‘ahu at Ka‘ena Point now that a predator-proof fence protects them.

At Ka‘ena Point on the northwest tip of O‘ahu, the Department of Land and Natural Resources tried to protect nesting habitat for seabirds. They closed off the area to motor vehicles and began trapping rats and other predators. It helped—Laysan albatross (mōlī) and Wedge-tailed shearwaters (‘ua‘u kani) began nesting among the native plants and in the dunes of this coastal ecosystem.. In 2011 over 3,000 shearwaters chicks hatched; and by 2012, 61 pairs of albatross took turns sitting atop their single egg. Unfortunately, control efforts only reduced the number of predators; it didn’t stop them. In a typical year, 15% of seabird hatchlings were killed. Periodically, stray dogs wandered into the reserve with catastrophic results. In 2006, 113 shearwaters were killed in a single night. The Department of Land and Natural Resources decided to build a fence.

Predator-proof fencing has been used extensively in New Zealand, but has only recently gained favor in Hawai‘i. It offers a promising solution for ongoing struggles like those at Ka‘ena. Rather than ongoing trapping to remove predators, resource managers can create protected “islands” where native plants and animals have a chance to recover. 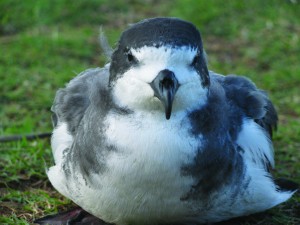 The Hawaiian Petrel or ‘ua‘u is one of several species that cold benefit from a predator proof fence on West Maui. Photo by Jay Penniman

On Maui, two fenced enclosures are currently being built on the windward side of the West Maui Mountains at Makamaka‘ole. One is for Newell’s shearwaters, or ‘a‘o, and the other is for Hawaiian petrels, or ‘ua‘u.  Both species nest in underground burrows and are vulnerable to attack by rodents, mongoose, and feral cats. The fences are designed to keep these hungry creatures out.  First Wind, which built Kaheawa wind farm, is creating the four-acre enclosures as part of their seabird mitigation program to address impacts caused by the towers.

The Makamaka‘ole fences will be similar to the one at Ka‘ena. The mesh on these predator-proof fences is so small that even two-day old mice can’t crawl through. The fence will be topped with a metal hood to keep any animals from climbing over, and a skirt extends along the base to keep animals from burrowing under.

Once the first enclosure at Makamaka‘ole is complete, invasive animals will be removed and sound systems will be installed that broadcast seabird calls to attract prospecting birds. If they land to investigate, they may find home in one of the 50 artificial burrows. Erica Thoele, supervisor of habitat conservation plan compliance with First Wind, says, “Hopefully they’ll think this is a safe place and build a nest,” says Thoele.  Crews will trap for predators along a 100 yard perimeter outside the fence in case any seabirds decide to nest nearby.  Ongoing monitoring will help evaluate whether seabirds are using the artificial burrows or digging their own nests in the enclosure.

Monitoring at Ka‘ena Point has shown promising results. The 700 yard fence was completed in March 2011 and protects 59 acres of coastline from predators. There have been dramatic increases in seabird productivity now that the rats have been removed- a 25% increase in the number of albatross nesting at Ka‘ena, and a doubling of the number of Wedge-tailed shearwater chicks fledging. Native plants are also showing signs of recovering with more abundant fruits, seeds and seedlings than had been observed prior to removing predators. The fences may keep the hungry critters out, but well-behaved humans are still welcome at Ka‘ena. Double-door gates along the fence allow access to the reserve.

Fencing projects elsewhere in the state are in the works. The Oahu Army Natural Resources Program built “snail” fences to protect rare native snails from rats, mice, Jackson’s chameleons, and the invasive rosy wolf snail. A new fence will be built next year at Kīlauea Point National Wildlife Refuge to enclose nearly eight acres of habitat for six different species of breeding seabirds. Plans are in process for a fence on Lāna‘ihale to protect ‘ua‘u nesting habitat. Learn more about predator proof fencing at Ka‘ena by visiting the website hawaii.gov/dlnr/chair/pio/nr/2011/NR10-225.pdf

By Lissa Fox Strohecker. Originally published in the Maui News, June 9th, 2013 as part of the Kia‘i Moku Column from the Maui Invasive Species Committee.