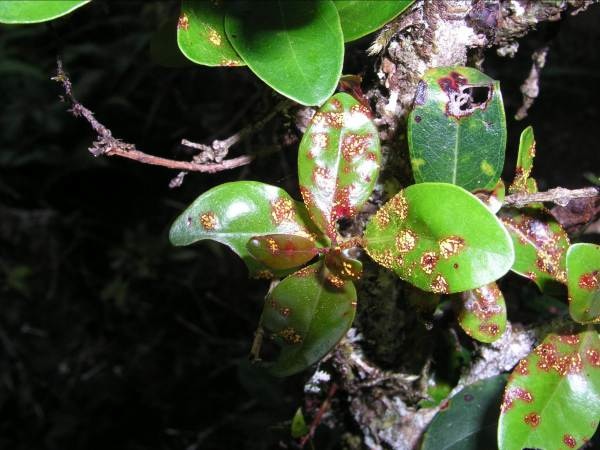 Puccinia psidii or “ohia rust” is found on the leaves of an ohia tree. Rob Anderson photo

It starts with a spot, a tiny dot of orange on a leaf bound for Hawai‘i. It could be on cut foliage destined for a florist or on a tree fated for a Hawai‘i yard. The miniscule speck of orange grows, produces spores, and covers the plant. Hawai‘i’s moist climate creates the perfect habitat for the little orange organism, a type of fungus known as a rust that attacks plants—often fatally. The trade winds spread the rust spores to more hosts and within months trees across Hawai‘i have turned brown, lost their leaves, and begun to die.

If a new strain of this fungus rust arrives in Hawaii it could devastate ohia forests. Orange rust fungus covers the leaves of a rose apple tree. FOREST & KIM STARR photo

In 2005 the rust attacked an invasive tree in the myrtle family–rose apple, but the rust grows on many myrtaceae species, including ‘ōhi‘a. The Hawai‘i Department of Agriculture identified the rust as Puccinia psidii and named it “‘ōhi‘a rust” in recognition of its impact on ‘ōhi‘a.  If a new strain of the rust arrives there is a very real chance that it will attack ‘ōhi‘a and cause the same level of damage as it did to rose apple.  This could be devastating: ‘ōhi‘a makes up 80% of our native rainforest and is the keystone species in the watershed.  In an effort to protect ‘ōhi‘a and our rainforest–the source of our water–the Hawai‘i Department of Agriculture is proposing a ban on the import of plants that could carry a new variety of the rust.

In 2008 HDOA implemented an interim rule, a temporary ban on the import of ‘ōhi‘a, but it was only active for one year. This new rule will protect ‘ōhi‘a as well as other, commercially important myrtle species, such as eucalyptus and ornamental trees.

‘Ōhi‘a covers nearly 1,000,000 acres in Hawai‘i, provides food for ‘i‘iwi, ‘apapane, ‘ākohekohe, and other rare birds; shelter for their nests; and habitat for native insects, snails, and other species.

Like a flu or a cold, there are different strains of rust. The strain of ‘ōhi‘a rust currently in Hawai‘i does kill ‘ōhi‘a seedlings, but very few.  However, the impact could be much higher. To evaluate the rust’s threat, Hawaiian ‘ōhi‘a seedlings were grown in Brazil, the home range of the fungus. Researchers exposed the seedlings to various strains of the rust, some which proved deadly.  These tests showed that a new rust strain is a potent threat to the Hawaiian forests and watersheds.

The ban will stop the import of plants and foliage of myrtle family that hitchhike into Hawai‘i from out-of-state or international sources. This material is commonly used in flower arrangements, but after the interim ban, many florists quit using eucalyptus as cut greens in flower arrangements.  Local sources of eucalyptus can still be used, and in doing so, local jobs are protected along with ‘ōhi‘a.  If growers want to import a myrtle species into Hawai‘i, they can do so after obtaining a permit and agreeing to quarantine the plant for one year.

Originally published in the Maui News, October 9th, 2011 as part of the Kia‘i Moku Column.
You can find all the articles in the Kia‘i Moku series http://www.hear.org/misc/mauinews/