As populations of invasive feral cats skyrocket in Hawaiʻi, so does the risk to native animal species. 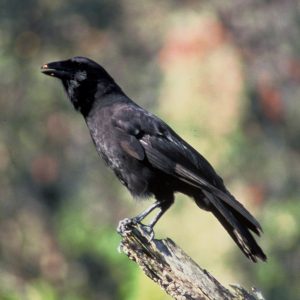 The ʻalalā, Hawaiian crow, is so rare that it currently exists only in conservation breeding programs. Efforts to release the bird into the wild have been stymied by the presence of Toxoplasma gondii, a parasite spread by feral cats. Photo courtesy of USFWS.

The ʻalalā, or Hawaiian crow, is one of the rarest birds in the world.  They are extinct in the wild, and only 114 birds are left in captive breeding facilities. The ʻalalā are protected from predators while they are in captivity. They are also protected from parasites found in the wild. These parasites are so widespread and persistent in Hawaiʻi’s forests that they may have interfered with attempts in the mid-1990’s to re-establish ʻalalā populations in the wild. Toxoplasma gondii, the parasite spread in cat feces, was found in five released ʻalalā, three died in the wild, a fourth died after being brought back to captivity.  The fifth recovered after being treated for the parasite.

ʻAlalā are not the only animal in Hawaiʻi threatened by toxoplasmosis, the disease caused by the Toxoplasma parasite. Over the last 15 years toxoplasmosis has killed nene (our state goose) and other native forest birds.

Even marine mammals are at risk. Eight critically endangered Hawaiian monk seals and two spinner dolphins have died from the disease. The actual deaths of marine animals are probably higher; the bodies of marine mammals aren’t always recovered or tested for toxoplasmosis. 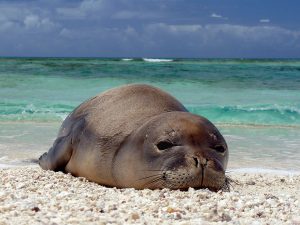 In 2015, a monk seal on Oahu died from toxoplasmosis infection. It is at least the eighth monk seal to suffer such a fate, a concern considering that the global population of these marine mammals hovers around 1,300.

The Toxoplasma gondii parasite can infect any warm-blooded creature, though the parasite’s life cycle depends on successful spread between cats and rodents, both of which are invasive in Hawaiʻi. Cats contract the disease by eating an infected rat; rats become infected when they come into contact with cat feces containing parasitic eggs. Once infected, the rats become risk takers – less fearful of cats and therefore easier prey — the cycle continues.

For about two weeks after infection, kittens or cats will shed microscopic toxoplasma eggs in their feces. These eggs can be infectious for months, even years under the right conditions. Animals ingest them through contaminated drinking water and meat, or when insects such as flies and cockroaches spread infectious eggs to food.

The population of feral cats on Maui is estimated to be between 300,000 to 600,000. Feral cats living along the coastline are a particular problem for marine mammals. On Maui, researchers estimated that the feral cat population around Kanahā Wildlife Refuge was at 1,100 in 2014. But wherever these feral felines are found (virtually everywhere on Maui – from the summit of Haleakala to the wettest rainforests down to the shoreline) feces can enter the watershed and wash into the ocean.

“The severity of the [feral cat] problem in Hawaiʻi is unlike anywhere else in country. On the mainland, growth of feral cat populations might be limited by extreme temperatures or the presence of larger predators, but here in Hawaiʻi they’ve found a paradise where populations can keep growing,” explains Joshua Atwood, Invasive Species Coordinator with the Department of Land and Natural Resources – Division of Forestry and Wildlife.

Humans are also at risk of contracting toxoplasmosis.  An estimated 30-50 percent of the population carries the parasite, and infection generally occurs without any apparent symptoms. However, some groups are particularly vulnerable if they do become infected. Pregnant woman that become infected are at greater risk for miscarriage or premature birth. Babies can acquire the parasite in utero and can suffer eye or brain damage.

“The severity of the [feral cat] problem in Hawaiʻi is unlike anywhere else in country. On the mainland, growth of feral cat populations might be limited by extreme temperatures or the presence of larger predators, but here in Hawaiʻi they’ve found a paradise where populations can keep growing,”

Young children are also high risk:  a child under three puts his or her hands or an object in his mouth every 2-3 minutes, imagine this child is playing in sandbox or at the beach near feral cat populations. Toxoplama parasites infect the brain, and though typically asymptomatic, toxoplasmosis infection can cause vision problems. Researchers are looking into links between toxoplasmosis and behavior change in people, including depression and schizophrenia.

Originally published in the Maui News on March 12th, 2017 as part of the Kia‘i Moku Column from the Maui Invasive Species Committee.