Check out the video below to see Dr. Cas Vanderwoude and the “Spackler of Death,” a creative solution to solve the problem of getting ant bait into trees to control the little fire ant or Wasmannia auropunctata. Learn more about the little fire in Hawai‘i and the Pacific at lfa-hawaii.org and littlefireants.com.

An infestation of the much-dreaded little fire ant (LFA), Wasmannia auropunctata, was discovered on a farm in Waihee, Maui, in early October of 2009, the first known LFA foothold on the island. As reported in the Oct. 16 Maui News, Hawaii Department of Agriculture (HDOA) will be working with the owner to eradicate the ½-acre infestation; LFA may have been at this site for a year. These tiny pale-orange ants deliver painful stings that develop into large red welts; some people are more sensitive to them than others. LFA may be perceived by many as less of a threat than the red imported fire ant but is nevertheless a very serious pest that can attain high densities, and its powerful sting poses problems for domestic animals, wildlife, agricultural workers and others who come in contact with it.  When populations build up outdoors, they eventually come indoors and sting people in their homes. In this regard it is actually worse than the other “imported fire ants” on the mainland. 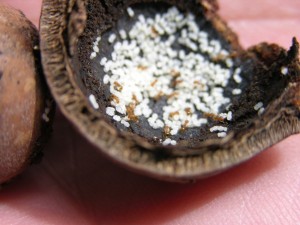 An entire colony of the little fire ant can fit inside a macadamia nut shell. Photo by Hawaii Department of Agriculture

Though LFA was first detected in Hawaii on the Big Island in March 1999, it is believed to have been there for at least four years before it was discovered; a lag between invasion and detection is regarded as “normal.” In retrospect, LFA likely had reached Hawaii from Florida; genotypes of Hawaii LFA are essentially identical to some LFA specimens from the Lake Placid area of central Florida. As soon as LFA was discovered in Puna in 1999, HDOA realized the seriousness of the situation. They developed a pest advisory and assigned an entomologist to lead efforts to address this new invasion, involving detection, experimental efforts at eradication of local populations, and inter-island quarantine.

A 2005 review of HDOA’s efforts to address this serious ant pest suggested that they were “hindered by low staffing levels; lack of public and commercial awareness; lack of access to nursery sales records; the difficulty of detecting this ant; lack of a registered ant control product for use in orchard fruit and vegetable crops; the failure of most people to take the threat of its invasion seriously. HDOA demurred from an all out eradication effort and enactment of an intra-island quarantine to prevent infected nurseries from selling plants.”  The fact that some plant nurseries were infested and probably selling infested plants made containment virtually impossible.  By September 1999, LFA was known to occupy 30 acres in three populations. By January 2004, there were known to be 31 populations totaling nearly 200 acres; eight of the populations at that time involved nursery infestations and the nurseries were still selling plants. LFA is currently coalescing in Hilo and Puna, much as coqui frogs are doing. 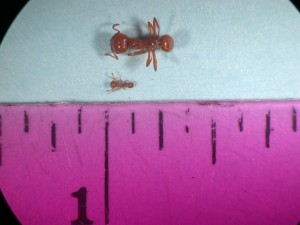 Don't confuse the little fire ant with the much larger and widespread tropical fire ant (above). Photo courtesy of HDOA

Maui has been determined to keep this ant out. Early detection efforts have been underway here for almost a decade, some involving students in intermediate and high schools. HDOA has implemented largely effective interisland quarantine that has at least helped to delay the infestation for a decade. What’s next?

Maui residents have shown impressive resolve in keeping the coqui frog confined to a relatively few areas, and coqui eradication is still considered a possibility. Most on Maui consider LFA a much more serious pest than coqui. We have the advantage of being able to learn from the Big Island’s experience. Obviously, the community needs to play a major supporting role if there is to be hope of sustained LFA eradication. One way to prevent LFA from being established is to report unusual stinging ants.  True to their name LFA are small, about as long as a penny is thick, with a sting disproportionate to their size.  Please call HDOA at 873-3962 or MISC at 573-6472 if you think you may have found LFA.

Will Maui citizens be able to pull together to effectively address the LFA threat?

Visit www.lfa-hawaii.org to report an infestation or www.littlefireants.org to learn more.

By Committee Member Lloyd Loope. Dr. Loope is a research scientist with the U.S. Geological Survey stationed at the Haleakala Field Station.  He holds a doctorate in botany from Duke University and is an active member of the Maui Invasive Species Committee.

Originally published in the Maui News, September 14, 2009 as part of the Kia‘i Moku Column.
You can find all the articles in the Kia‘i Moku series http://www.hear.org/misc/mauinews/