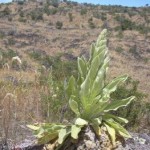 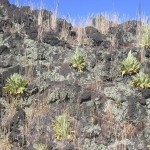 Originally published in the Maui News, September 10, 2006 as part of the Kia‘i Moku Column.

The slopes of Haleakalā are the only home for some of the rarest plants and animals in the world.  Among them, `āhinahina, the Haleakalā silversword grows for up to 50 years before flowering and casting its seeds for the next generation to the wind.  To protect these and other native species the Maui Invasive Species Committee (MISC) partners, including Haleakalā National Park, are on the lookout for invasive plants and animals that could threaten this delicate environment.

Common mullein (Verbascum thapsus) is one such invader.  It was first introduced to the Island of Hawai`i for erosion control in the early 1900’s and has since become well established on Big Island volcanic slopes.  Scientists have observed that mullein out-competes other plants and grows to an abnormally large size, particularly at higher elevations on Hawai`i.  This has raised concern that mullein would quickly invade and out-compete native plants in the higher elevation habitats on Haleakalā.

This Eurasian plant has become a widely established weed throughout temperate areas of the world.  Its gray-green, felt-like leaves range from 4-12 inches long and 1-5 inches wide.  Mullein grows in a low rosette for the first year or two and at maturity sprouts up an erect stalk with yellow flowers.  This pest grows up to 10 feet tall and can invade elevations from sea level to above 10,000 feet.

Several characteristics make mullein all too successful as an invasive plant.  Although noted for the ability to quickly colonize disturbed areas, it does not require disturbance to rapidly invade the loose volcanic cinders and `a`ā lava in Hawai`i.  This weed grows in dense thickets displacing slower growing and longer maturing native species, such as the silversword.  Like the silversword, protective hairs on the leaves of mullein reflect the intense alpine sunlight, pre-adapting this weed for the arid conditions on Haleakalā.

Unlike the silversword, mullein produces large quantities of seed, which remain viable for long periods of time.  Each mature mullein plant sprouts a flowering stalk, which develops up to 150,000 seeds.  Seeds may remain dormant for over 100 years, waiting for favorable environmental conditions or dispersal into suitable habitats.  With silverswords taking up to 50 years to seed compared to just two or three years for mullein, it is easy to imagine how mullein might displace `āhinahina.  Because of these invasive characteristics and the high risk to native species, mullein was declared a Hawai`i State Noxious Weed in 1992.  In the late 1980’s, two immature mullein plants were found in Haleakalā National Park along the roadside leading up to the summit and were immediately destroyed.  None have been found in the park since.  Soon after that first incident, it was discovered that an upcountry nursery raised mullein and sold it to a number of homes.  When informed by park staff of the ecological threat, the nursery agreed to halt sales and destroy the remaining stock.  This cooperation sparked an article in The Maui News urging mullein purchasers to destroy their plants.

It is difficult to know if everyone destroyed their plants and there’s always the possibility that there are new locations.  Just this summer, a new site was discovered Upcountry.  MISC was notified and responded immediately.  The plant was killed and the seeds were collected.  The cooperative landowner is now monitoring the property for additional plants that may sprout in the future.

Today, early detection of mullein is critical to keeping Maui Nui free of this pest.  Do your part to stop the spread of this and other invasive species.  Do not purchase, sell or import unknown plants.  Learn how to identify mullein and report possible locations to the Maui Invasive Species Committee at 573-6472.

Check out all of the MISC articles in the Kia`i Moku series at: www.hear.org/misc/mauinews/

In April of 2006, a Makawao resident noticed an unusual plant growing in his yard.  It had large leaves with purple undersides.  Curious, he did some research and discovered it was miconia – a plant native to Central and South America that is invading Maui’s rain forests.  Surprised by his findings, he immediately called the Maui Invasive Species Committee (MISC).  MISC staff investigated and was stunned to find a miconia seedling growing out of a hāpu‘u fern in Makawao!  To date, miconia was known only from East Maui (one intentional planting in West Maui had been eradicated).  Because the resident knew the origin of the hāpu‘u (Big Island), MISC surmised that a tiny miconia seed had hitched a ride on a hāpu‘u harvested from a miconia-infested area and sprouted three years later.  The miconia plant was young and had not seeded, a plus for the environment.  Left undetected, the plant would have quickly matured, eventually releasing ten to twenty million seeds each year into an area thought to be miconia-free.

Miconia was first introduced to Maui in the 1960’s as an ornamental plant in Hāna, then quickly spread to the surrounding forests.  By 1993, one plant had multiplied into thousands, distributed over a 2,000-acre area.  Alarmed by miconia’s potential to overwhelm available resources, conservation agencies pulled together and formed the Maui Invasive Species Committee (MISC), a voluntary partnership to protect Maui County from invasive plants and animals.  Over the years, MISC’s focus broadened to include many other invasive species, but miconia continues to be the top priority plant target.  MISC now has a full-time crew searching for and destroying miconia over thousands of acres in East Maui.

Miconia leaves can grow to be the size of a small child, averaging 2-3 ft long and 1 ft wide.   The leaf has a dark purple underside, oval shape, and 3 distinct veins.  In its native environment of South and Central America, miconia’s large leaves help the plant capture limited sunlight in dense, dark forests. On Maui, the forest structure has a more open canopy, so many native plants have not developed a tolerance for dense shade. Miconia’s leaves act as “light” umbrellas, casting a deep and often deadly shade over native vegetation.

A characteristic common to many invasive plants is the ability to produce large quantities of seeds that remain dormant for a long time.  Miconia is no exception.  Each mature plant can produce millions of seeds per year, which may not germinate for another 8–10 years.  The rapid spread of miconia in East Maui has been aided by unintentional movement of these tiny seeds, as small as a grain of sand. Birds, hunters, hikers, vehicles, and even the movement of other plants, can bring miconia to new areas.

You can help combat the spread of miconia.  Learn how to identify the plant.  A good resource for photos and information is www.mauiisc.org. Always clean your shoes and gear before and after hiking.  Know the origin of plants that you purchase.  If you think you have found miconia, report the location to 573-MISC (6472).  If you have miconia on your property, allow MISC to control it free of charge.  Just by doing these simple preventive measures, you are helping to keep Maui nō ka ‘oi.  Keep an eye out for this new monthly column to learn how you can protect Maui from invasive plants and animals that are threatening Maui County.

By Joylnn Paman
Originally published in the Maui News, August 13, 2006 as part of the Kia‘i Moku Column. Check out all of the MISC articles in the Kia`i Moku series at: www.hear.org/misc/mauinews/