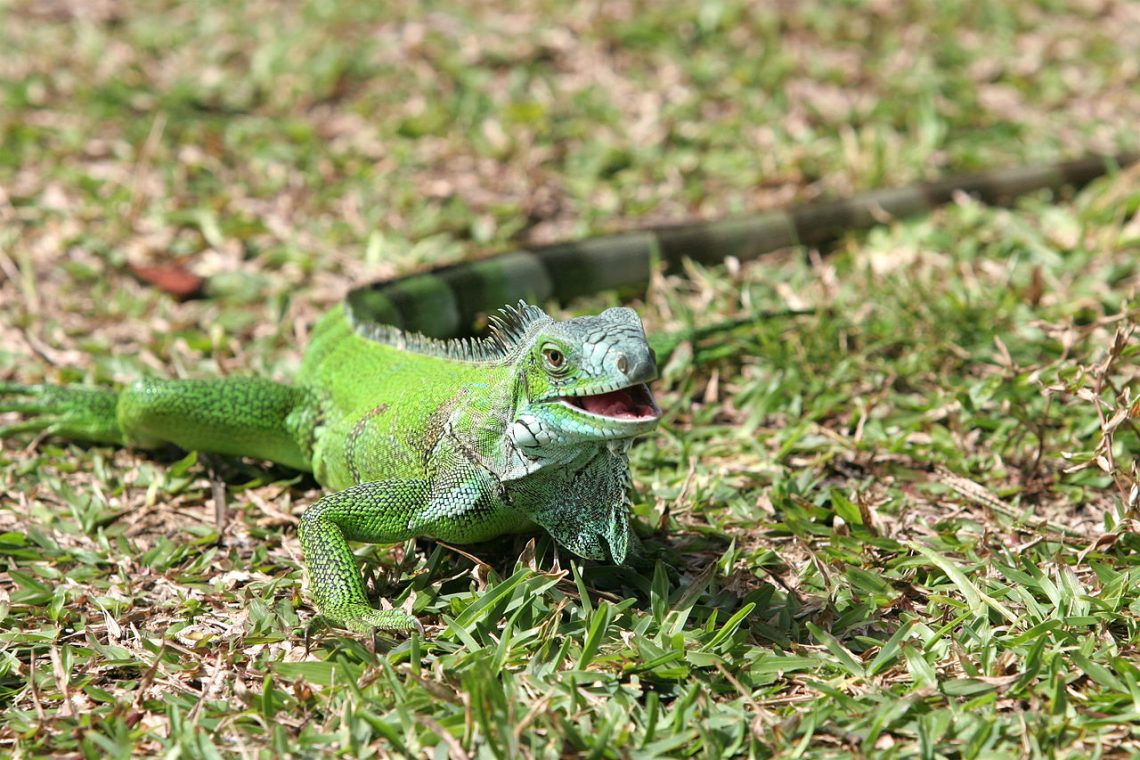 On Maui, green iguanas, like this one photographed in the French Antilles, are sometimes seen when they come down from trees. Any sightings should be reported to the Hawaii Department of Agriculture. Photo by Tristan Nicot.

Chuck Chimera only caught a glimpse of the 3-foot long lizard dining on his neighbor’s nasturtiums, but it was enough. He knew he’d seen more than an abnormally large gecko, skink, or chameleon. “I thought my neighbor was just exaggerating when she said she kept seeing a huge lizard,” said Chimera.

The reptile was four feet long including its tail, and green with spines running down the length of its back. A loose flap of skin hung from its jaw. It turned and scrambled into the bushes with remarkable speed. It was not the first, nor is it likely to be the last iguana sighting on Maui.

In some places, iguanas are popular as pets, but it is illegal to possess a green iguana in Hawaiʻi. Getting caught with one here could mean a fine of up to $200,000. They are a threat to people and to the environment, and any sightings should be reported to the Hawaiʻi Department of Agriculture.

Over the last 20 years, keen observers have spotted the large reptiles on the loose in Kāʻanapali, Kanaio, Makawao, Haʻikū, and Kahului. Alert citizens captured two live turned them in to the Hawaiʻi Department of Agriculture, one from Kīhei and one from Central Maui, and two dead animals were turned from Makawao.

According to Dr. Fern Duvall of the Hawaiʻi Department of Land and Natural Resources, the frequency of these sightings suggests these animals might not merely be escaped contraband pets. He suspects that feral iguanas are breeding in Kanaio, Haʻikū, and the Puu Koliʻi neighborhood in Kāʻanapali. Before people arrived, lizards did not exist on the Islands. These invaders could cause trouble.

Green iguanas are vegetarian lizards native to low-elevation habitats ranging from Mexico through Central America to Brazil and Ecuador. Females lay a clutch of 20-70 eggs each year. In their natural habitat, juvenile iguanas and eggs become food for rats, hawks, owls, snakes, crocodiles, and people. In Central and South America they are a source of meat and called “gallina de palo,” chicken of the trees. They are so popular on dinner tables in Panama that they are protectively managed as a food source.

Iguanas come down from the trees to drink and several iguanas have been seen near reservoirs on Maui. Photo of iguana in Brazil by Charles Sharp.

But Floridians have yet to develop an appetite for this scaly reptile. In South Florida, green iguanas have become so prolific they are serious pests. They eat people’s landscape plants and gardens, dig up sidewalks and seawalls, and sneak into swimming pools–leaving behind smelly scat that can spread salmonella. The exotic lizards spread the seeds of invasive plants and boot Florida burrowing owls from their burrows. These invaders may be preventing the critically endangered Miami blue butterfly from reestablishing in the Florida Keys; they devour the leaves of the nickerbean vine, the butterfly’s host plant.

How could a large, dinosaur-like lizard live amongst us mostly unnoticed? Iguanas are quiet and docile, spending most of their lives in trees. Sightings generally happen when the scaly climbers descend from the trees to bask in the sun or seek out water.

So look twice at lizards in trees or basking in the sun – if it looks like an iguana, try to take a picture and report it. If you can safely capture the animal, do so, but be cautious as iguanas have sharp teeth and can be aggressive when cornered. Don’t confuse an iguana with the common Jackson’s chameleon, a much smaller, 3-toed lizard that is only 7-10 inches in length. Report any iguana sightings to the Maui Branch of the Hawaiʻi Department of Agriculture: 872-3848 or to the Pest Hotline – 643-PEST. Illegal pets can be turned in through the Department of Agriculture’s Amnesty Program.

Written by Lissa Strohecker. Originally published in the Maui News on November 8th, 2015 as part of the Kia‘i Moku Column from the Maui Invasive Species Committee.