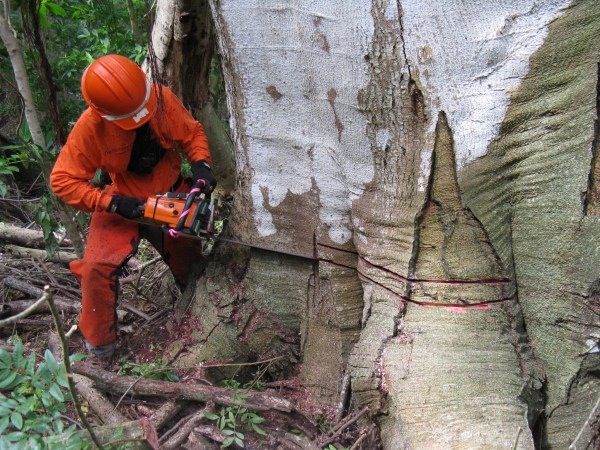 How does a two-person team control 850 invasive trees? If you’re MoMISC, you ask for permission first—from the landowner, the ancestors, and the trees themselves.

When Lori Buchanan of the Moloka‘i/Maui Invasive Species Committee (MoMISC) learned that albizia trees were invading a steep gulch in Nā‘iwa, she started strategizing. Native to the Indonesian archipelago, albizia rapidly monopolizes disturbed mesic and wet forests in Hawai‘i, and can rise to over 120 feet tall with wide, interlocking canopies. Because albizia trees fix nitrogen in the soil, they alter Hawaiian forests to favor non-native plants.

The Nā‘iwa discovery was the only albizia population on Moloka‘i—making it a good candidate for eradication. But controlling the trees would be a huge project, requiring the cooperation of many stakeholders.

These giants reach over 120 feet tall.

First Buchanan approached the landowner, who granted access to the site. Land and air surveys revealed a fifteen-acre patch of mature trees, some with trunks measuring seven feet in circumference. Before rounding up extra hands to help with control work, Buchanan consulted kumu Mikiala Pescaia, who has genealogical ties to the area.

“It’s a good idea to ask permission before you do anything,” says Buchanan. “Every place is sacred, or has some history, and so it’s always a good idea to consult the indigenous culture.

“Nā‘iwa is makahiki and hula grounds. The crew needed to know why it’s special before working there.”
Pescaia agreed to ask her ancestors to bless the project and to share the importance of the site’s numerous platforms and heiau with the crew. She explained how killing during the makahiki season would be inappropriate, since it was a time of peace and rest.

Kumu Mikiala Pescaia and the crew at the edge of Kalaupapa.

“She took us to the edge of Kalaupapa and said, ‘This is where the spirits leap off,’” says Buchanan. “After that, the crew was hyped. We knew we were going to sweat and work our butts off, but people would appreciate what we were trying to do. It put our work in a whole new light.

“Mikiala sees all her cultural sites being taken over by invasive species. Our work is important to her, to her ancestors, and to future generations. It’s a step in restoring a whole genealogy.”

Mikiala Pescaia asked her ancestors for permission before entering the work site. She outlined appropriate behavior for the crew to observe while working: no swearing, negative thoughts, smoking, or removing anything from the area. 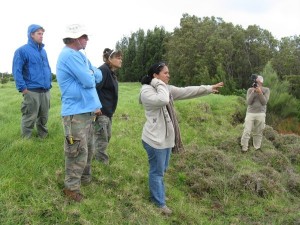 Kumu Mikiala Pescaia and the crew at the edge of Kalaupapa.

Then, says Buchanan, “She went to the edge of the gulch and said to the trees, ‘You guys have to go. Thank you for what you’ve provided—oxygen, shade, etcetera, but you have to go. Lori and MoMISC are going to come and take you out.’”

Actually, it was Lori, MoMISC, and a small army. Kamalani Pali, the other half of MoMISC, helped organize crews from The Nature Conservancy, Maui Invasive Species Committee, and U.S. Fish and Wildlife Service. John Neizman from the Department of Land and Natural Resources assisted with clearing the access road. Two retired foresters volunteered to cut and treat trees. The U.S. Department of Agriculture Plant Materials Center donated ninety pounds of native kāwelu, ‘a‘ali‘i, and ‘āweoweo seed mix. Before controlling the trees, Pescaia and the crew spread the seeds throughout the site, to repopulate the forest with native plants and suppress albizia regrowth.

Scientists and cultural advisors agreed that the best time to start work was the first week of March, after makahiki had passed. The crew girdled massive trunks, scraping the bark off with chainsaws to get to the heartwood and swabbing the cuts with small amounts of herbicide. Despite the heavy labor—three days of wielding chainsaws and rappelling to reach cliff-side trees—no one was injured.

Local businesses pitched in, too. Moloka‘i Community Federal Credit Union and Ron Kimball of Kamehameha Schools helped feed the workers. Mac Poepoe and Kanohowailuku Helm, local fishermen who have published a Hawaiian moon calendar, gave a pau hana workshop on how to be a pono fisherman. Realtors Diane and Larry Swenson accommodated visiting crews in their roomy warehouse.

A year later, only four of 850 albizia trees required re-treatment. The project brought together community members, field staff, and cultural practitioners. Work crews valued the opportunity to practice traditional protocols while working to free the island’s native forests from invasive pests. There’s no arguing that involving the community and asking for permission resulted in resounding success. The lessons learned during the albizia project will be applied to future control efforts on Moloka‘i and Maui.

“So many components had to come together. Everybody had to be on board,” says Buchanan. “But that’s our job: to make it easy for people to help us.” • 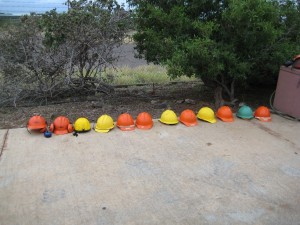 This article originally appeared in the Winter 2010 edition of Kia‘i i Nā Moku o Maui Nui, the newsletter of the Maui Invasive Species. Find the full newsletter at www.hear.org/misc/newsletter/. 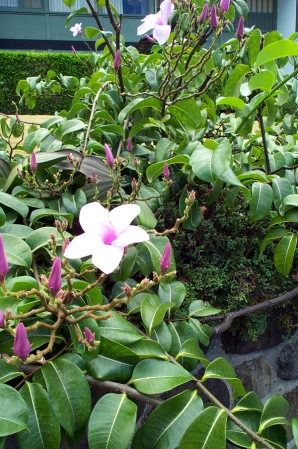