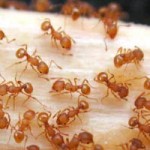 Family: Formicidae
*Little fire ants are listed as Hawaii State Injurious Species. It is prohibited to release Injurious Species into the wild; transport them to islands or locations within the State where they are not already established; or export outside the State. for more information, see dlnr.hawaii.gov/wildlife/invasives/injurious-wildlife/

Since the discovery of Wasmannia auropunctata on the Hawaiʻi Island in 1999, the Hawai’i Department of Agriculture (HDOA) worked closely with the local invasive species committees (including MISC), as well as the United States Fish and Wildlife Service to prevent the further spread of this ant species. The Hawaiʻi Ant Lab, a project of the Pacific Cooperative Studies Unit, is also working diligently to mitigate the threats and prevent the inter-island and intra-island spread of existing invasive ant species, including the little fire ant.