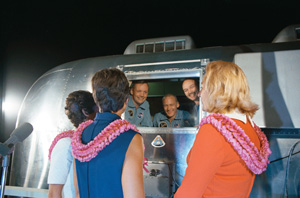 No hugs and kisses yet. The astronauts on Apollo 11 spent nearly 2 weeks in a quarantine facility when they returned from their moon landing to ensure they were not carrying any lunar microorganisms. Looking through the window (left to right) Astronauts Neil Armstrong, Edwin Aldrin Jr., and Michael Collins. The wives are (left to right) Mrs. Pat Collins, Mrs. Jan Armstrong, and Mrs. Jean Aldrin. Photo Courtesy NASA.

When the Polynesians set out to find Hawai‘i, like all explorers, they did not know what they would find so they packed carefully, bringing food and other essentials to help them survive in the new land. Modern travelers do the same, whether heading to a new town or a new planet, yet, even with all the preparations, there are still surprises—sometimes in the way those essential items can affect the final destination.

This is the first in a series of three articles looking at efforts to protect the places we journey to from the things we journey with.

The farther you travel the more preparations you make. And for exploring the far reaches of our known universe, preparations take years. When the first astronauts walked on the moon, they were understandably more interested in what they would find than what they would leave behind. But the possibility of contaminating distant lunar or planetary bodies was on the mind of many scientists at the time. Contamination could compromise scientific experiments, invalidating any proof of life on anther planet. Or an organism from earth could become invasive—altering or destroying life on a distant planet.

With these concerns in mind, the U.S. National Academy of Scientists passed a resolution in 1958 urging scientists to “plan lunar and planetary studies with great care and deep concern so that initial operations do not compromise and make impossible forever after critical scientific experiments.”  Soon thereafter, NASA’s planetary protection office was created, with a focus on preventing both forward contamination–earth microbes into space– and back contamination—alien microbes back to earth.

To reduce the likelihood of forward contamination, spacecraft are built in cleanrooms designed to reduce the amount of dust and bacteria landing on a spacecraft. Workers must wear protective clothing so they do not leave behind hair or bacteria. And once the spacecraft is built, it is sterilized, either by baking in a giant oven at 325˚F for 30 hours or by treating it with vaporized hydrogen peroxide.

The level of planetary protection varies by the type of mission and destination. For example, an orbiter mission to Mars has a lower probability of contamination than a probe actually landing on the planet, so the cleaning requirements would be less rigorous – what’s known in space lingo as acceptable levels of biological burden. .

And as for what comes back to earth? There are protocols for that as well. When the astronauts from Apollo 11 splashed down south of Johnston Atoll in the middle of the Pacific in 1969, the recovery crew passed biological isolation garments into the hatch and resealed it. Donned in their new attire, they climbed aboard rafts and were sponged off with bleach before entering a quarantine facility aboard the rescue ship where they were isolated for 2 weeks and observed for infections from lunar pathogens. Subsequent missions Apollo 12 and 13 had similar protocols, but NASA has since classified the moon as devoid of life and relaxed decontamination for lunar missions.

NASA’s planetary protection office is tasked with protecting life in the universe from accidental movement of organisms between celestial bodies.  But the goal of planetary protection is not so different from the responsibilities facing the quarantine branch of the Hawai‘i Department of Agriculture, doing its best to prevent both forward and back contamination on our little planet of Hawai‘i. The impacts of alien contamination coming into our state can be catastrophic—think fire ants or snakes. You can do your part on your next exploration to reduce the “biological burden,” even if it just means brushing your boots before a hike or checking plants you bring onto your property to ensure you aren’t introducing an “alien” contaminants.

By Lissa Fox Strohecker. Originally published in the Maui News, January 12th, 2014 as part of the Kia‘i Moku Column from the Maui Invasive Species Committee.