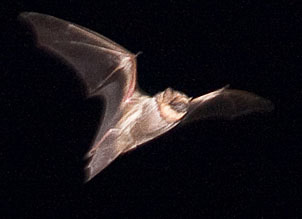 Opeapea is a subspecies of the North American hoary bat and is the only terrestrial mammal native to the Hawaiian Islands.

Under the cover of night a skilled hunter twists and turns in the Hawaiian sky, darting and dodging trees with acrobatic skill to catch dinner.  Little is known about this hunter: scientists don’t have an estimate of its population size, and outside of the scientific community, few people even realize that Native Hawaiian bats exist.

Prior to the arrival of humans, other species traveled to Hawai‘i one of three ways: on the wind, via water, or by wing (either flying here themselves or being carried by a winged creature). It follows that the only native land mammal would bear wings.

‘Ōpe‘ape‘a is a subspecies of the North American hoary bat. Found only in Hawai‘i , it’s listed as a federally endangered species. Its Hawaiian name means “half-leaf,” and refers to the bat’s open wing, which resembles the bottom half of a taro leaf.

‘Ōpe‘ape‘a are more common than most people realize, but researchers have only recently begun to study this species more closely. Genetic evidence indicates that bats colonized the Hawaiian Islands in the not-too-distant past—first arriving approximately 10,000 years ago with a second colonization as late as 800 years ago. 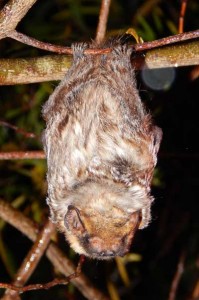 An opeapea, sleeps hanging from a tree branch. Little is known about the Hawaiian hoary bat in part because of their tendency to roost alone in trees. Photo courtesy of Forest and Kim Starr

Like all bats, ‘ōpe‘ape‘a are nocturnal but you won’t find them roosting in caves. These bats are solitary tree roosters, attaching themselves to the tips of branches on a tall tree.  Weighing in at only ½ oz, these little acrobats are hard to find and even harder to study. Mist nets, the kind used to catch and study songbirds, are not very effective when catching bats, as the tiny mammal quickly learns to avoid the net.

The most effective way to detect ‘ōpe‘ape‘a is with ultrasonic bat detectors that pick up the bats’ vocalizations as they travel and hunt. Recent improvements in ultrasonic detection technology have made bats easier to study, and researchers in Hawai‘i  are working to find out more about these mysterious mammals.

On Hawai‘i Island, researchers detected ‘ōpe‘ape‘a more frequently during the summer at lower elevations, possibly because food is abundant during the summer at lower elevations or because the warmer temperatures mean less stress for newborns and lactating mothers. Mother ‘ōpe‘ape‘a  give birth to pups, typically one set of twins, in May or June and stay with the pups until they are 6-7 weeks old. When the pups are young, the mother will carry them with her on her nightly hunts. When they are old enough to hold on to the roosting site themselves, she will leave them safe in the tree until they are old enough to fly with her and learn to hunt. ‘Ōpe‘ape‘a’s diet is mostly moths, but includes mosquitoes, beetles, crickets, and termites.

When temperatures began to cool, researchers on Hawai‘i  Island found increased bat activity at higher elevations. Whether that means they “migrate” up and down the mountain is still uncertain. Even movement between islands is unknown, but bats are on all the main Hawaiian Islands so inter-island movement occurred at some time in the past. 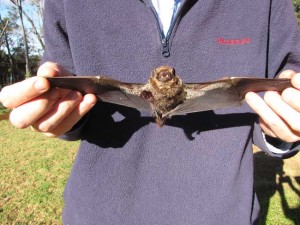 Researchers studying the opeapea are learning more about this federally endangered species. It has been seen throughout Maui, from sea level to the top of Haleakala as it swoops through the sky. Photo by Forest and Kim Starr

On Maui, researchers know ‘ōpe‘ape‘a are in Haleakalā National Park, both at the summit and in the crater. The flying insectivores are often spotted at sea level as well. There is a good chance they are in your neighborhood.

Look for bats at twilight, particularly along pasture edges pastures and clearings. Bats dart back and forth as they catch insects, whereas the rare birds returning to roost take a direct path.

The threats to ‘ōpe‘ape‘a not yet clear but one cause of death is collisions with man-made objects such as communication towers, wind turbines, and barbed wire. This may happen as the bats catch an insect and “turn off” their echolocation for a few seconds to eat.

You can help protect this endangered species. If you know you have ‘ōpe‘ape‘a in your area, protect roosting sites–don’t cut tall trees until after the summer pupping season.  If you are installing a fence in a pasture, consider using barbless wire on the top strand to prevent snagging a hunting bat. If you find a dead bat on Maui, contact Fern Duvall, Wildlife Biologist with the Department of Land and Natural Resources, at 873-3502. You can help scientists learn more about the genetics and habits of this cryptic creature—far more spectacular than spooky.

By Lissa Fox Strohecker. Originally published in the Maui News, October 12th, 2014 as part of the Kia‘i Moku Column from the Maui Invasive Species Committe