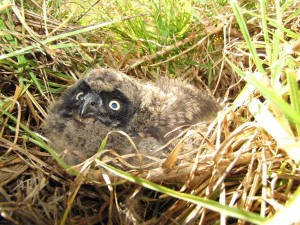 A pueo chick peers out from its nest. Ground nesting birds, like this native owl, are vulnerable to predation by introduced rats and mongoose. Photo by Forest & Kim Starr

In Hawai‘i , owls are creatures of myth.  Owls are said to rescue lost souls from the underworld and guide armies to safety. Hawaiian legends say the god Kāne took the form of an owl in battle to protect his people. Seeing an owl is always exciting, and it’s easy to overlook the fact that today there are two species of owls in Hawai‘i : the native pueo and the introduced barn owl.

The pueo, known to scientists as Asio flammeus sandwichensis, is a subspecies of the short-eared owl; it’s found only in Hawai‘i . For many Hawaiian families, both ancient and modern, pueo are ‘aumakua, ancestral guardians that protect the family from harm. Pueo are skilled hunters, dining on mice, insects, and small birds. Scientists believe they arrived in Hawai‘i  after the Polynesians and it’s possible that introduced rats helped the population establish. Unlike many owls, pueo hunt during the day but like the fate of many birds native to Hawai‘i , their population levels are now low and they are rarely seen. 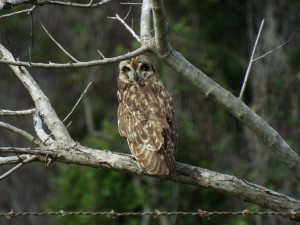 A pueo perches on a tree branch in Ulupalakua. The native pueo are darker in color than the introduced barn owl. Photo by Forest & Kim Starr

Pueo can be distinguished from the introduced barn owl (Tyto alba) by appearance as well as hunting behavior. Pueo are smaller, stockier, and darker in color than the barn owl with brown streaking and a brown, round face whereas barn owls are lanky and light in color with a nearly white, heart-shaped face. Pueo nest on the ground, making them more vulnerable to introduced mammals like rats, mongoose, and cats, whereas barn owls nest in tree cavities. Pueo are more active during the day than the barn owl.

Most owl sightings today are likely to be barn owls. Between 1958 and 1963, the Hawai‘i Board of Agriculture 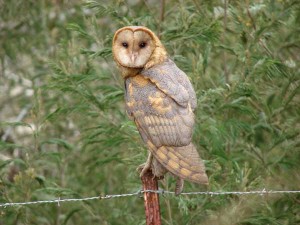 Introduced barn owls are the owl most often seen in Hawaii. Photo by Forest & Kim Starr

and Forestry imported 86 barn owls to Hawai‘i Island, Moloka‘i, O‘ahu, and Kaua‘i ­­to control rats in cane fields. The population took off and today this generalist predator is common on all the main Hawaiian Islands and has also been seen in the Northwest Hawaiian Islands. Unfortunately, there is no evidence that the barn owl has had a significant impact on rat populations.

This introduced species may start hunting around dusk, but mostly stalks its prey under the cover of darkness. Its nocturnal habits raise concerns for resource managers working to protect native birds as barn owls can take advantage of species that may be naïve to a nocturnal raptor.

Jay Penniman of the Maui Nui Seabird Recovery Project has seen the impacts first hand. His project works to protect ‘ua‘u, or Hawaiian petrel, an endangered ground-nesting seabird. On Lanai, crews regularly recovered carcasses from ‘ua‘u killed by barn owls. “In the area we were working, we’d find a half dozen kills in a year,” says Penniman. “This indicates it’s a relatively common occurrence.” They know pueo are not the culprit as pueo are active during the day and the ‘ua‘u only return to their burrows at night.  Additionally pueo are slightly smaller than the ‘ua‘u, making the native seabird an unlikely target. Penniman suspects that the barn owls learn to specialize on seabirds and once that happens, become very effective. Other native birds are vulnerable as well: barn owls have been known to snatch Newell’s shearwaters, Hawaiian stilts, Bulwer’s petrels, brown noddies, Hawaiian ducks, and nēnē goslings. Barn owls are protected under the migratory bird act, but exemptions are allowed to remove these predators in critical refuge areas.

Meanwhile, pueo populations have declined dramatically. At the end of the 19th century, pueo were widespread and often seen throughout the islands. But despite being active during the day, these owls are rarely seen today. Besides predation, other possible causes include disease, collisions with vehicles and habitat loss.

You can help. If you find an injured pueo, the Hawai‘i  Wildlife Center on Hawai‘i  Island can help rehabilitate it. Find out more information on their website: www.hawaiiwildlifecenter.org

By Lissa Fox Strohecker. Originally published in the Maui News, November 9th, 2014 as part of the Kia‘i Moku Column from the Maui Invasive Species Committee