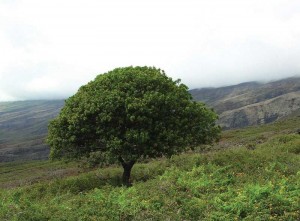 Christmas berry, is also a pest in the pastures of Hawaii. Photo by Forest and Kim Starr

Covered in glossy green leaves and bedecked with red berries, the invasive shrub, Schinus terebinthifolius, is commonly known by the appropriate moniker of Christmas berry.  But the presence of this Brazilian species in Hawaiʻi hardly inspires festive spirit in the hearts of island resource managers.

Christmas berry was introduced to Hawaiʻi sometime before 1911 to spruce up yards. Before long this hardy shrub escaped backyards and began to spread across Hawaiʻi .  Drought-tolerant, fire-resistant, and even capable of withstanding flooding for up to six months, Christmas berry thrives in dry and mesic climate zones across the archipelago. 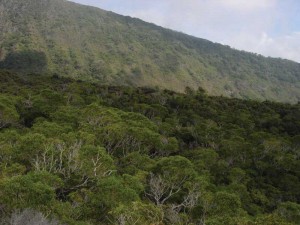 The Hawaiian mesic forest found in Kaupō Gap is one of the most diverse ecosytems found in the state. Photo by Woody Mallinsin

The mesic forest zone is characterized by a moderate amount of rain and no extended droughts—ideal conditions for many plants. Hawaiian mesic forests are one of the most varied ecosystems in the islands, home to a diverse assemblage of endemic plants found nowhere else on earth. Dominated by koa, this forest is also home to sandalwood, māmane, tree lobelias, and species of native hibiscus. This is critical habitat for native insects, birds, and the ʻōpeʻapeʻa, or Hawaiian hoary bat, yet the mesic forest is one of the most threatened and consequently most rare ecosystems

Today, Maui’s mesic zone is where the farmland, pasture, and houses that make up Makawao, Kula, and ʻUlupalakua can be found.  Unfortunately, native forest not lost to development is being gobbled up by feral deer and goats and infested by fast-growing, non-native weeds, such as Christmas berry.

Christmas berry, is also a pest in the pastures of Hawaii. Photo by Forest and Kim Starr

Crews from Haleakalā National Park are trying to reverse that trend. After fencing goats out of Kaupō Gap, crews began removing some of the worst invasive plants in the area. Capable of establishing in shady conditions and releasing chemicals that inhibit the growth of other plants, Christmas berry is one of the most significant threats to endangered plants.

Christmas berry is not only a pest to pristine native forest; it has a well-deserved reputation as a pasture weed. Cattle pass over the turpentine-scented leaves, but birds savor the plentiful seeds, helping to spread the plant to new areas. With high germination rates, Christmas berry quickly chokes out pastureland.

Christmas berry is also a problem in Florida where it’s known as Brazilian pepper. This invader has taken over an estimated 700,000 acres, threatening riparian areas and unique ecosystems of Everglades National Park.

Like other established invaders, Christmas berry is a target for biological control.  With hopes of checking the spread and vigor if Christmas berry, the Hawaiʻi Department of Agriculture introduced several insects that attack the plant in its native range In the 1950s and 60s the Hawaiʻi  Department of Agriculture brought in three insects, a beetle and two moths from Brazil. The beetle and one moth became established but have only caused minor damage.  Another beetle, an unintentional import from Australia, attacks the plant’s seeds.  Currently, research is underway on the efficacy of a sawfly, a wasp-like insect that feeds on the leaves of the plant, for biological control in Hawaiʻi.

You can help. If you live near sensitive natural areas, please do not plant Christmas berry. You can find information from the University of Hawaiʻi s College of Tropical Agriculture and Human Resources about how to control Christmas berry at ww.ctahr.hawaii.edu/invweed/WeedsHI/W_Schinus_terebinthifolius.pdf

A chance to see some of the last remaining intact mesic forest in Hawaiʻi is only a hike away on the Kaupō trail. Before you go you, learn more about the plant communities of Kaupō through the Haleakalā National Park website: www.nps.gov/hale/naturescience/upload/Kaupo-Gap-Mesic-Forest-2.pdf

By Lissa Fox Strohecker. Originally published in the Maui News, December 14th, 2014 as part of the Kia‘i Moku Column from the Maui Invasive Species Committee