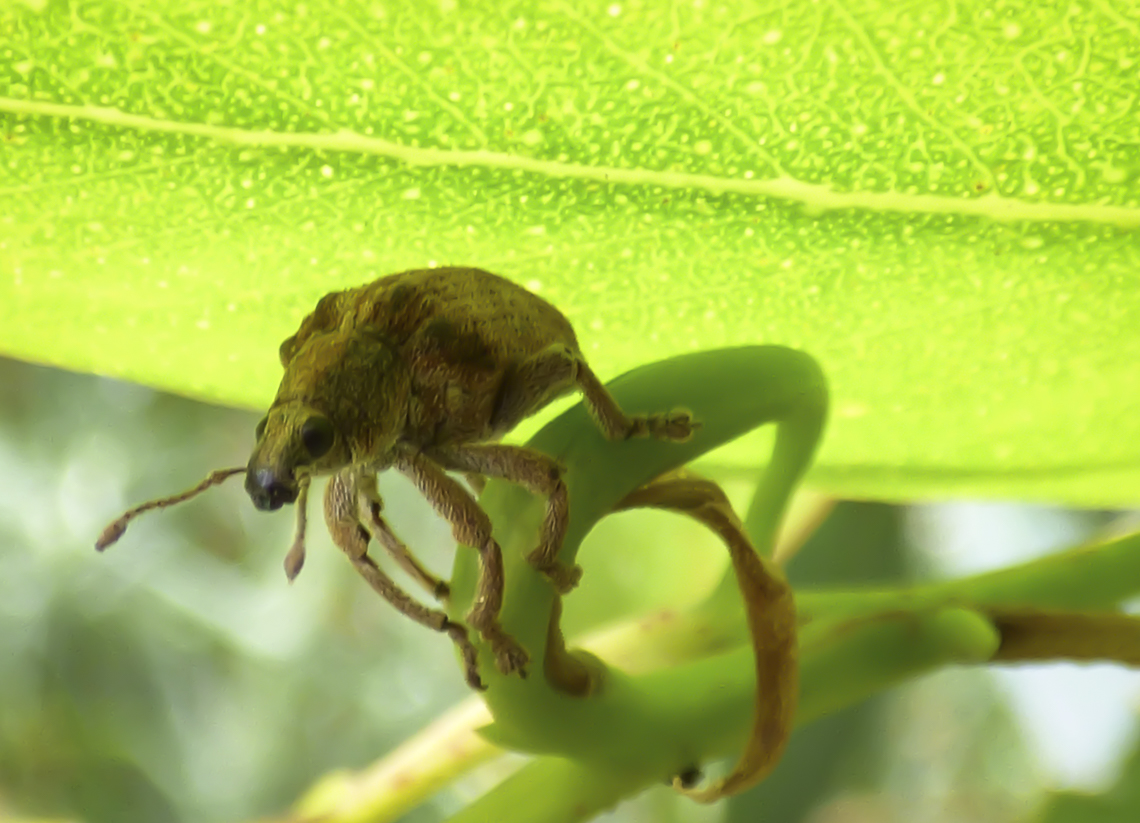 The eucalyptus snout weevil. Photo by Forest and Kim Starr.

In 2004, University of Hawaii (UH) entomologist Will Haines was visiting his parents in upper Haʻikū when he saw an unfamiliar yellow and green worm-like creature munching on eucalyptus leaves. Eucalyptus have few pests in Hawaiʻi, so this was a strange find. The oil-rich plants are virtually inedible to most insects.

Haines is a researcher working at UH in the Plant and Environmental Protections Sciences. He’s curious by profession. At first he thought it was a caterpillar but couldn’t figure out what kind. It wasn’t until he found the adult, a homely weevil, that he determined that he wasn’t seeing a caterpillar, but rather the larvae of a eucalyptus snout weevil, Gonipterus platensis to entomologists, never before found in Hawaiʻi. 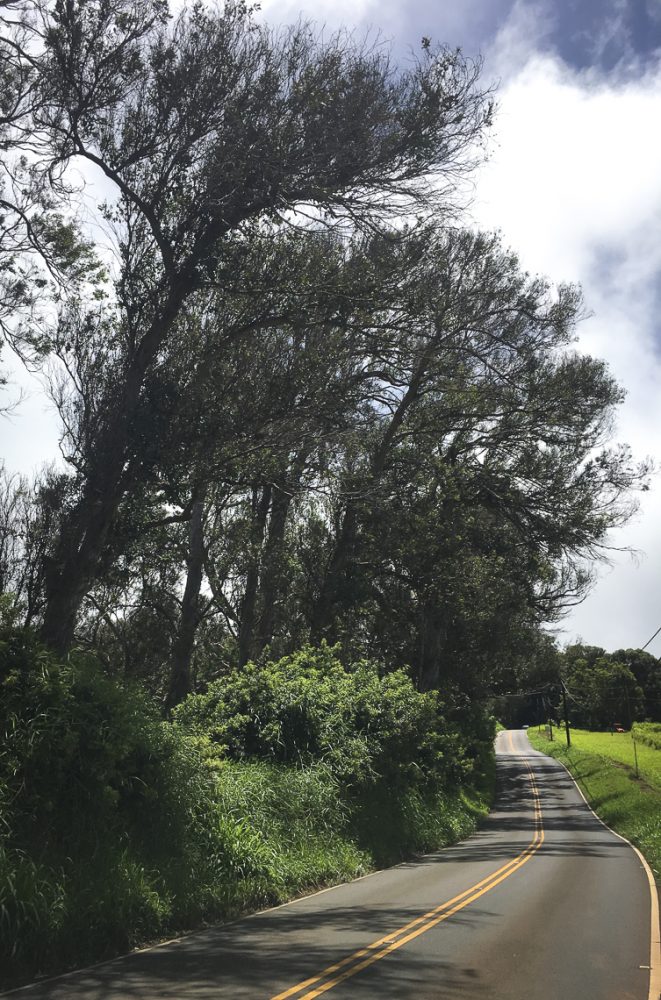 A blessing in disguise: the bluegum eucalyptus that line Piiholo Road are nearly dead after pest insects have spent over a decade munching their leaves. These eucalyptus are invasive, but their devastation will likely mean power outages and detours. MISC file photo.

Fast forward twelve years and many of the eucalyptus upcountry sport bare sticks where new growth should be. The snout weevil is only part of the reason. Another leaf-eating insect, the eucalyptus tortoise beetle (Paropisterna m-fuscum) is likely also responsible. The leaf-eating insects are native to Australia but have been found widely in California and may have arrived from the U.S. mainland.

New growth seems to be the most appetizing for these leaf-eaters and soon enough, trees feature bare branches where they should have new leaves. As older leaves die they aren’t replaced and the eucalyptus dies back. Plant diseases are also found on affected trees, possibly taking advantage of the ailing trees. The tree most affected appears to be Eucalyptus globulus, bluegum eucalyptus. Other species of eucalyptus are affected to a lesser extent.

Hawaii is the adopted home to over 90 species of eucalyptus, with bluegum being one of the most common. Fast-growing and remarkably tall, up to 200’, they were introduced in the mid-1800’s and used as boundary markers for pasture land, timber, wind breaks, and erosion control. On Maui, the State planted over 4,000 bluegum eucalyptus trees between 1910 and 1940, but private landowners and ranches have added to the total. As of the mid-1980’s there was an estimated 100 million board feet of bluegum eucalyptus, much of it along roadsides. Bluegums are fast growing and quick to spread, characteristics thought desirable when they were initially introduced. 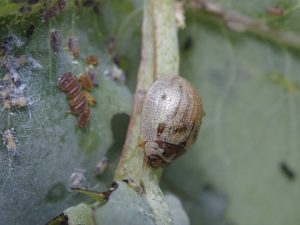 A eucalyptus tortoise beetle and eggs in the foreground. Photo courtesy of Will Haines.

Most species of eucalyptus are invasive. The massive, water-laden trees are prone to falling in wind storms, even when healthy. But the thought of miles of roads lined with dying trees is concerning, particularly for residents along the roads. Power outages and detours are the likely outcome, probably more common than they are now. Then again, some of these giants may fall peacefully, dropping to the ground limb by limb, unable to catch the wind and sail over. Time will tell.

In the long-term, these insects may make eucalyptus less invasive. But until then, keep an eye on the eucalyptus near your homes, and it might be time to consider removal—particularly for the trees within falling distance of your house.

Originally published in the Maui News on September 11th, 2016 as part of the Kia‘i Moku Column from the Maui Invasive Species Committee.