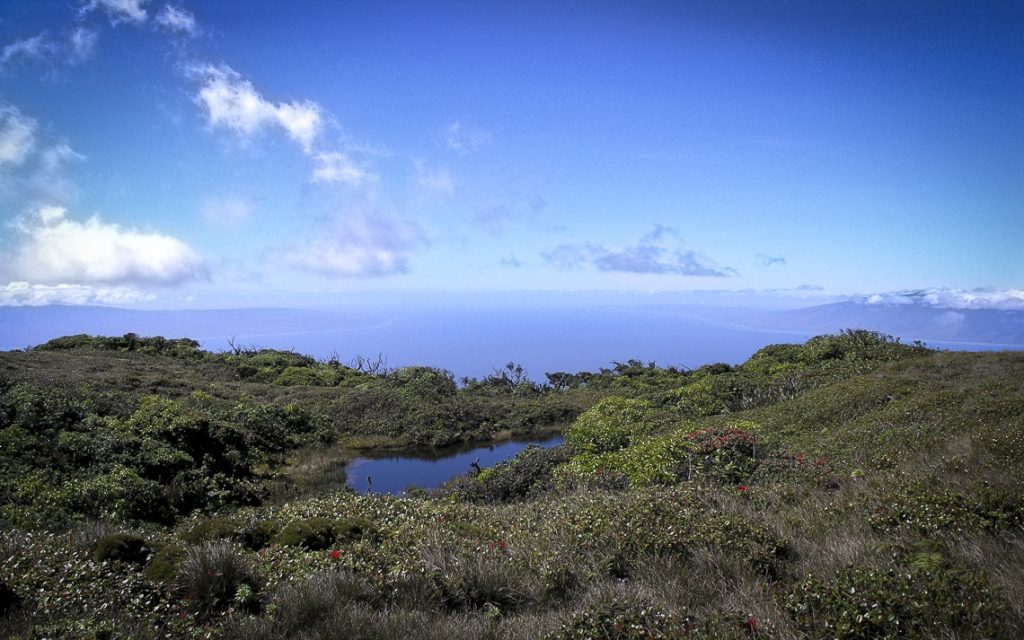 The upper elevations of the West Maui mountains are home to unique plants and animals found only here. Among them, species of lobelia and dwarf ʻōhiʻa. Tibouchina is one of the persistent threats to the survival of these rare species. Photo by Lissa Strohecker.

Tucked away in the rain and fog of the West Maui mountains are uniquely Hawaiian treasures: high-elevation bogs carpeted by rare and restricted plants. The last few hāhā (Cyanea magnacalyx) existing in the wild anywhere in the world are found there. Dwarf ʻōhiʻa, two unique silverswords, and many other plants are restricted to the high summit bogs and have adapted to the wet substrate.

Conservation crews monitor these bogs closely–they are in a section of West Maui that is fenced and protected from pigs, goats, and deer. Nonetheless pinhead-sized seeds of invasive cane tibouchina (Tibouchina herbacea) blow into the bog from the lower elevations and threaten the fragile ecosystems.

If crews did not remove tibouchina, it would take over the bog, crowding out the Cyanea and other endangered plants. It’s only in these ecologically sensitive bogs that crews remove tibouchina–there is simply too much of it on the surrounding slopes. As a result, it’s a continuous battle.

“Tibouchina is scattered throughout the 50,000 acre watershed of the West Maui. It’s found from sea level to the summit of Puʻu Kukui, but thrives in the wet windward slopes between 2,000-4,000 feet,” says Chris Brosius, manager of the West Maui Mountain Watershed Partnership. His crew helps to protect the bogs along with the rest of the watershed.

“West Maui is the steepest land area in the state, more dissected by cliffs than any other watershed in the Hawaiian Islands,” says Brosius. Even if they had the capacity, “We couldn’t possibly control this species everywhere it grows.”

Tibouchina thrives where there is soil disturbance–whether from pigs or the landslides that helped shape the West Maui’s. Tibouchina is often the first plant to arrive after a landslide.

Tibouchina belongs to the melastome family, a group of plants that are notoriously invasive in Hawaiʻi–miconia and clidemia are both melastomes. An ugly second-cousin to miconia, tibouchina is often leggy and scruffy looking. The leaves are two inches long, fuzzy, and lack the purple underside that characterizes miconia; the purple flower is pretty, but small–unlike the closely related glory flower.

A member of the melestome family, tibouchina is a notorious invader thatʻs past the stage of containment. Photo by Forest and Kim Starr.

Biologists first noticed tibouchina in 1977 on Big Island and in 1982 near Waiheʻe Ridge on West Maui. Within a few years it had spread throughout Maui, Lānaʻi, and Hawaiʻi Island. By 2005 it was found on Oʻahu, likely introduced on dirty hiking boots. It has shown up on Molokaʻi as well. As a trailside weed, it can be problematic–hikers passing through a patch of tibouchina end up coughing as tiny hairs are knocked off and the plant can be a skin irritant.

Tibouchina is native to Brazil. It can be difficult to find there–occasionally appearing in wet areas and meadows. It only reaches three feet in height and dies back every year. But here in Hawaiʻi, tibouchina can be 9-12 feet high. When last year’s growth dies back, the plant re-sprouts from the roots, creating bamboo-like thickets and taking over habitat for native species.

Why would the plant behave so differently here? One explanation is the lack of predation. Tibouchina evolved in Brazil alongside insects that munch its leaves, seeds, and roots. These insects are not present in Hawaiʻi, so tibouchina grows and spreads unchecked. One of tibouchina’s natural predators is a small beetle–both the larvae and the adults devour tibouchina leaves.

The beetle, called Syphrae uberabensis, can only survive by eating tibouchina and select other melastomes, none of which are native to Hawaiʻi. After 20 years of work collecting and evaluating the beetle’s impacts on other species in quarantine, US Forest Service scientists are confident that the beetle poses no negative threat and are preparing to release it into the wild. 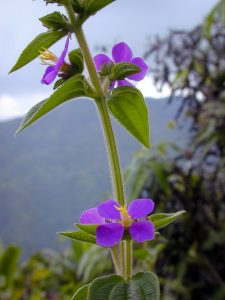 An insect that relies on tibouchina for survival is in the final stages of evaluation for release in Hawaii. The syphrae beetle could make tibouchina less invasive. Photo by Forest and Kim Starr

The syphrae beetle could be what takes tibouchina down a notch–reducing the threat it poses to the remaining habitat of Hawaiʻi’s rarest native plants and animals. “If we don’t intervene, this species will continue to encroach on high-value native areas, erode biodiversity and spread elsewhere in the state,” says Brosius.

Tibouchina is just one example of a widespread pest with dramatic impacts. You can help by cleaning your hiking and hunting gear to prevent spreading hitchhiking pests.

This article was originally published in the Maui News on January 14th, 2018 as part of the Kia‘i Moku Column from the Maui Invasive Species Committee.

If you are interested in the use of biological control in Hawaiʻi, check out these posts: