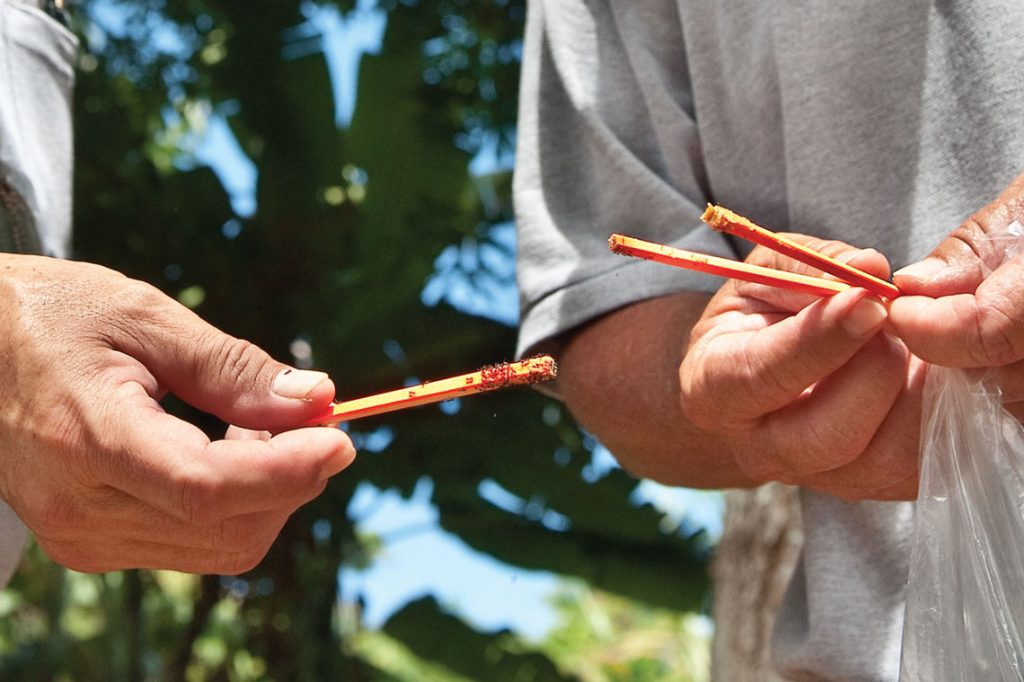 Test any material coming from an area infested with little fire ants. Preventing the spread of pests to new areas and finding infestations early is critical to achieving eradication. Photo by Masako Cordray

Life in paradise inevitably means dealing with invasive species in some form. From termites to rats, centipedes to garden weeds, there is an unending onslaught of pests we all deal with. Efforts to control them usually buy a temporary respite; we known and expect these pests will return.

Eradication, removing every last reproducing individual (or seed, in the case of plants) is the gold standard of invasive species management. In theory, eradication is achievable for any pest species, given enough time and money. In reality, time and money are in short supply. Deciding to eradicate a species is a significant undertaking, typically only possible when the target population level is low and accessible. 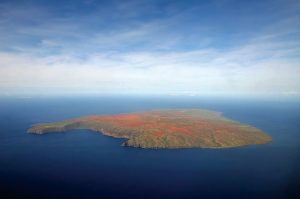 It took 80 years to eradicate feral goats from the island of Kahoʻolawe but today the island is recovering.

Goats once ran rampant on Kahoʻolawe. Introduced to the island in 1793, a gift to Chief Kahekili of Maui from Captain Vancouver, these hearty hooved beasts quickly took over, limited only by food availability. They devoured the vegetation on the island, threatening native species and exacerbating erosion. Starting in 1910, a host of assorted land managers, including ranchers, the military, and the state government battled goats on Kahoʻolawe. Over a period of 80 years goats were hunted aggressively—but always a few remained, too difficult to find. When control would cease, goat populations would explode again.

The last goat was finally removed in 1993 that goats were truly eradicated from the island. Those last few goats were the hardest to find, yet tracking down the holdouts was critical to the island’s vegetation recovery. As was the case on Kahoʻolawe, persistence is often a key ingredient of successful eradication efforts.

Not just large invaders can be eradicated—little fire ants, for example, are eradicable. These miniscule ants have something in common with the goats that once riddled Kahoʻolawe: removing the last few is the most challenging yet most important part of the job. 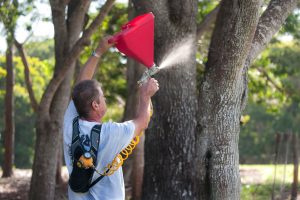 Until Hawaii Ant Lab arrived, attempts at eradicating the tiny ground and tree-dwelling little fire ant had failed. Getting a bait to the queen is part of the challenge, one met by their research and expertise. Photo by Masako Cordray

“It’s easy to kill 99% of the ants. It’s the last 1% that makes it tricky,” says Cas Vanderwoude, manager of the Hawaiʻi Ant Lab. His organization provides the expertise behind the efforts to eradicate little fire ants from Maui. And, as with any attempt to truly eradicate an invasive species, most of the work lies in finding the last few. “Surveys are essential to understanding where the ants are, how effective the treatment is, and if the population is eradicated.” Currently, MISC and the Hawaiʻi Ant Lab anticipate that infested properties will be monitored indefinitely to ensure the little fire ant has been eradicated.

The fact that these tiny invaders also live in trees adds to the challenge. Historically, treatment of the little fire ant relied on granule pesticides developed for fire ants in general. These granules could only be scattered on the ground and did nothing to control the colonies of ants living in trees. In Hawaiʻi, worker ants find enough food in trees, relying on sap sucking insects and other food sources, never needing to forage on the ground. Without workers carrying bait back to the queen in the nest, the colony will survive, reproduce, and reinvade, as the goats of Kahoʻolawe did time and time again. Fortunately, the Hawaiʻi Ant Lab has developed techniques for controlling little fire ant on the ground and in the trees. 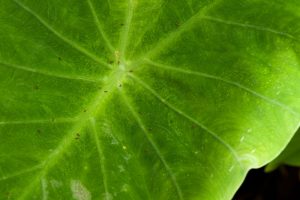 Little fire ants seen on a taro leaf for scale. These tiny terrors have huge impacts. Photo by Masako Cordray

On Maui there are only a handful of little fire ant populations: Nāhiku, Kapalua, Huelo, and Waiheʻe.  Though eradicating these infestations will be a challenge, complete removal of the little fire ant from Maui is the goal thanks to the expertise of the Hawaiʻi Ant Lab.

Eradication is time-consuming and expensive, though the price is negligible when compared to the never-ending cost of suppressing these pests so we can continue to enjoy life in Hawaiʻi as we know it. Economists estimate that the cost of damage from little fire ants on Hawaiʻi Island will exceed $140 million if current trends continue.

Eradication is costly, but it is an investment in the future. You can help to keep little fire ants at bay by ensuring you do not have any present on your property. Survey your yard for the little fire ant. Quarantine and test potted plants, mulch, and soil before distributing it on your property. Find testing information online at stoptheant.org or littlefireants.org

Originally published in the Maui News on January 6th, 2017 as part of the Kia‘i Moku Column from the Maui Invasive Species Committee.

Read more about the efforts and impacts of little fire ants: 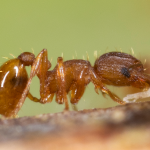 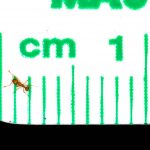 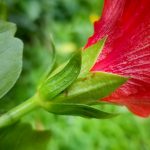 The little fire ant (LFA) has been detected in the Twin Falls area, Huelo, Maui.

An infestation of little fire ants (LFA) has been detected at an area known as Twin Falls, in Huelo, East ...
Read More 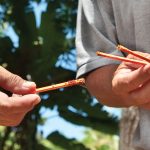 Why All the Talk About Eradication?

Life in paradise inevitably means dealing with invasive species in some form. From termites to rats, centipedes to garden weeds, ...
Read More 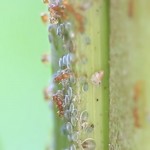 Little fire ants are spreading throughout the state. First introduced to Puna in 1999, and shortly thereafter to Kaua’i, these ...
Read More 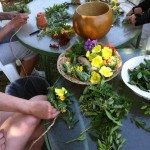 Aunty Penny Martin is a lei-maker on Molokaʻi. She was talking story one day with a friend visiting from Hawaiʻi ...
Read More 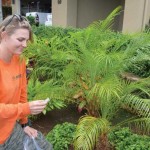 LFA – Insidious invaders that you can stop

Ginger Johnson bought a hapu‘u fern late in 2013 to plant alongside others in her yard. But when she heard ...
Read More 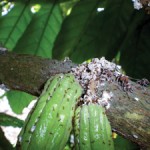 The little fire ant, Wasmannia auropunctata, is a pest with a deservedly nasty reputation. Alone, this wee ant is neither ...
Read More 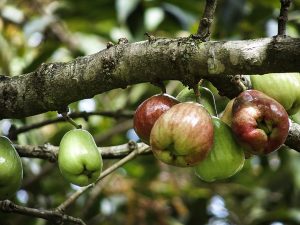 ʻŌhiʻa ʻai, mountain apple, is an introduced species and one of the thousands of plants in Hawaiʻi that are harmless. Photo by Forest and Kim Starr.

The vast majority of introduced plants stay in the gardens where they are planted. Without their native pollinators or preferred climate, their survival and spread depends on humans. Our careful maintenance keeps them going. Take breadfruit and citrus trees—they flower and fruit in Hawaiʻi, but can’t set seed and therefore don’t spread in the wild. If you want these plants, you have to cultivate them.

A small subset of introduced plants spread without human help. “Of the roughly 12 to 13,000 non-native plants present in Hawaiʻi, only about 12% have become naturalized, or have formed self-sustaining populations in the wild,” explains Chuck Chimera, the Weed Risk Assessment specialist with the University of Hawaiʻi. 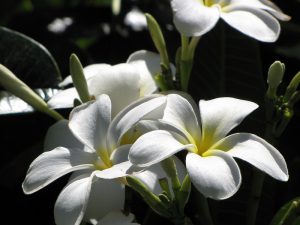 Plumeria is one of the 12-13,000 plants introduced to Hawaiʻi. Plumeria do not produce seed and therefore never escaped cultivation. Photo by Forest and Kim Starr.

Naturalized, non-native species are those we regularly see hiking or driving down the road; they are the plants in the unmanaged parts of the land; spreading without our help, forming self-sustaining populations that will persist year after year. Sometimes, we take notice of them: like a mountain apple along the roadside. Sometimes we overlook them, like self-heal, a small, purple flowered plant in the mint family – it grows from the lowlands to around 8000ʻ, given enough water. 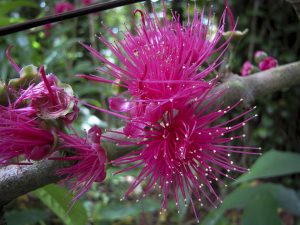 ʻŌhiʻa ʻai flowers in the forest are a sight to appreciate. Photo by Forest and Kim Starr.

Introduced plants or animals often provide a service to us or to the environment: Cook pines collect water from passing clouds, sweet potato and citrus fill our bellies, wild hives of European honeybees pollinate our gardens, and red-billed leothrix spread the seeds of native plants. 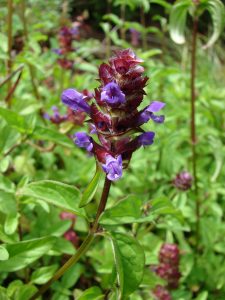 Self-heal, Prunella vulgaris, is a common introduced plant in Hawaiʻi. Photo by Forest and Kim Starr.

It is only tiny subset, roughly 1% of all the introduced species, that spread aggressively and outcompete native Hawaiian plants. Capable of transforming our ecosystems, these are the invasive species that land managers battle. Miconia, fountain grass, little fire ants, and strawberry guava are among the most notorious. While these bad actors get a lot of attention, most foreign introductions are benign, and even provide benefits to us.

Take time to appreciate the beauty and savor the tastes of all the introduced species that abound. A Valentines bouquet of locally grown flowers, a meal of fresh fish on a bed of locally grown greens, haupia for dessert. Support  your neighborhood farmer or flower grower at a farmers market or grocer. Doing so helps prevent the accidental interisland spread of hitchiking pests like little fire ants or coqui frogs.

Please make wise planting decisions; check before you plant. The  Weed Risk Assesment is 95% accurate at predicting the liklihood of a plant becoming invasive in Hawaiʻi. Check it out at plantpono.org

Originally published in the Maui News on February 12th, 2017 as part of the Kia‘i Moku Column from the Maui Invasive Species Committee.