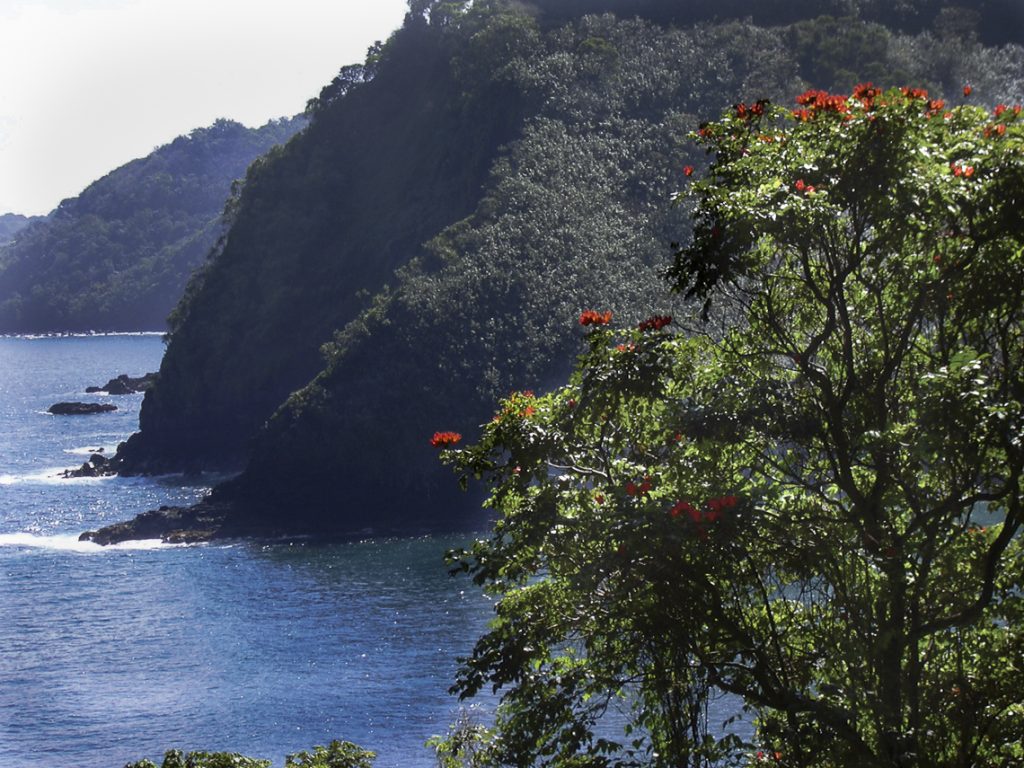 African tulip trees are a common sight along the Hana Hwy. Photo by Forest and Kim Starr

An African tulip tree in bloom is a remarkable burst of color. Consequently, the tree has earned many monikers: flame of the forest, fountain tree, and fireball. Scientists know it as Spathodea campanulata and this East African Native has been in Hawaiʻi for a long time. Renowned physician and botanist William Hillebrand first planted African tulip trees in Hawaiʻi in the late 1800s. Around 1915 Joseph Rock, another prominent figure in Hawaiian botany, introduced S. campanulata seeds collected in Java. In the late 1920s and 30s foresters planted and dropped African tulip seeds by air throughout many parts of the state. On Maui nearly 30,000 trees were planted. But as the “flame of the forest” spread and awareness of invasive species increased, people began to be concerned about the trees spreading.

We now know that African tulip trees are invasive and damaging to Hawaiian ecosystems. They grow extremely fast; in Puerto Rico they can increase 2” in diameter per year, shooting up from the forest floor and outcompeting other plants for sunlight. They can be a notorious pasture pest, springing up when land is cleared and creating a field of tulip trees with little else. Prolific seeders, their papery oatmeal-like seeds blow in the wind for miles. But perhaps what makes these trees most invasive is their shade-tolerant seedlings.

Shade tolerance means a seedling can sprout in an intact, shaded forest, then invade and dominate the landscape. This contrasts with many other invasive species that depend on disturbances and light gaps to gain a foothold. African tulip invades either way.

Given that African tulip seedlings can germinate and grow with little sunlight, they can creep into undisturbed forests and take over, growing faster than surrounding plants and expanding their domain. That is exactly what has happened along the windward slopes of East Maui. Beauty is in the eye of the beholder, and to those who know, the pretty, bright orange flowers ascending the hills above Hāna represent a garish plague. Potentially replacing ʻōhiʻa, ʻōlapa, maile and other native plants. The higher they go, the more likely they are to affect native forests.

The silver (or orange) lining to the presence of African tulip trees in our forests is currently limited in their ability to grow at high elevation. The flame of the forest peters out at around 3200’ elevation, near the boundary of the native dominated forest. The low-elevation forests where African tulip tree is found are already dominated by non-native plants, so the orange invader just dukes it out with other weedy pests. 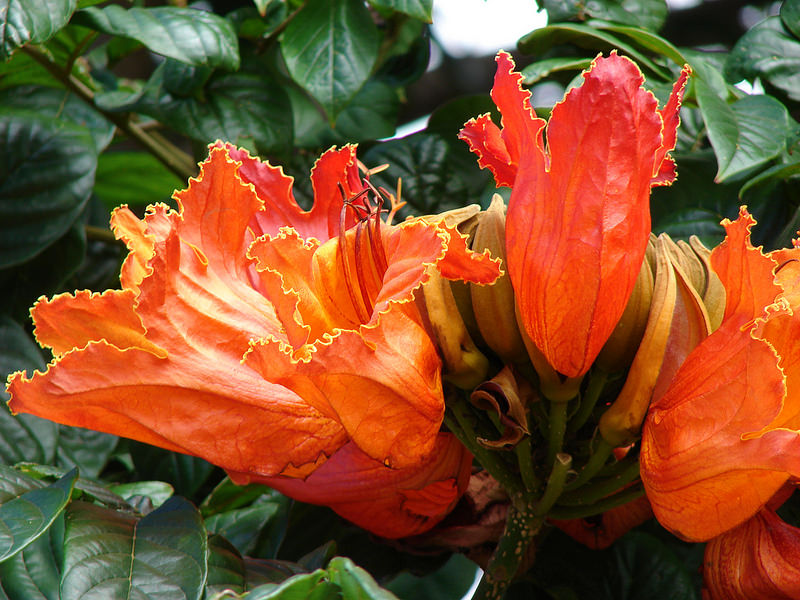 Prolific seeders, these introduced species have invaded much of the low-elevation forests of Hawaii. However, they seem unable to grow at elevations above 3200′ in Hawaii.  Photo by Forest and Kim Starr.

Near the border of the native forest though African tulip’s impacts are magnified. When possible, it should be removed. That is what Lance DeSilva with the department of Land and Natural Resources Division of Forestry and Wildlife is doing, both on Maui and Molokaʻi. In East Maui he’s decided to push back the upper elevation presence of African tulip tree by controlling the far-reaching plants in the Koʻolau Forest Reserve, particularly in and around Waihou Valley. “It’s my professional and personal goal to shrink the African tulip tree population of Koʻolau Forest Reserve,” says DeSilva. To date he and his team have removed over 650 trees. On Molokaʻi he’s taken out 48 trees along the north shore of Molokaʻi.

You can help. Don’t plant these trees, and if you already have them, consider removal. They are a particular hazard near homes and roads due to their tendency to drop limbs. For advice on removing African tulip tree, review the College of Tropical Agriculture and Human Resources’ handout on the Incision Point Application Technique: https://www.ctahr.hawaii.edu/oc/freepubs/pdf/WC-11.pdf.

This article was originally published in the Maui News on May 14th, 2017 as part of the Kia‘i Moku Column from the Maui Invasive Species Committee.