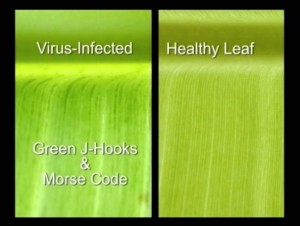 Check for “J-hooks” along the midrib of the of the banana leaf. This is a symptom of BBTV infection. Photo Courtesy of Scott Nelson, UH-CTAHR.

In the spring of 2009, Angela Kepler found a diseased banana plant on her neighbor’s property. “It really freaked us out! As soon as we found out we ran next door and sprayed for aphids.” The neighbor’s banana plant was infected with banana bunchy top virus (BBTV). “BBTV is the worst,” Kepler explains. “Now we help check everyone in the neighborhood.”

Angela Kepler and Frank Rust study bananas. Of the 32 different kinds on their property, most are rare Polynesian bananas collected from the wild or someone’s backyard. They photograph and observe each plant from keiki to fruiting to learn the key characters that make each type unique. Kepler and Rust are writing a book on how to identify different types of bananas. They know what BBTV can do. 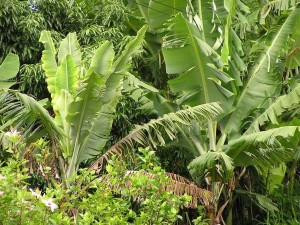 The plant on the left is infested with BBTV. Note how the new growth is bunched together, a symptom that gives the disease its name. Photo courtesy of Scott Nelson, UH-College of Tropical Agriculture and Human Resources

BBTV is the most serious known disease of bananas. Infected plants produce shrunken, malformed leaves and distorted fruit—if they fruit at all. BBTV eventually kills all plants in an infected mat (root mass)there is no cure for the disease. Removing infected plants and preventing spread is the only control for BBTV—a necessary precaution if bananas are to continue being grown in Hawaii. BBTV threatens the banana industry, backyard farmers, and rare, culturally significant banana varieties, such as those grown and collected by Kepler and Rust. “We’ve seen a tremendous demise in the last 10 years,” says Kepler.

BBTV is spread between plants by banana aphids. The virus is passed from an infected plant to the aphid and transmitted when the aphid feeds on a healthy plant. People then spread BBTV great distances when they transport infected plants. Anyone who moves or harbors infected plants puts their neighbors’ plants at risk.

Banana bunchy top virus is widespread in Southeast Asia, the Philippines, Taiwan, the South Pacific, and in parts of India and Africa. It was first discovered in Hawaii in 1989. BBTV is widely established on O‘ahu and has been detected on Hawai‘i Island, Kaua‘i, Maui, and Moloka‘i. “We haven’t been able to collect bananas from other islands, or share ours due to BBTV,” says Kepler.

On Maui, backyards in Kīhei and Pukalani suffer the densest infestations of the disease. Banana farms in Kula and, most recently, central Maui have been wiped out. Not surprisingly, BBTV thrives in Lahaina as well; drier climates are better aphid habitat. Scattered infestations of BBTV have been found in Ha‘ikū and Huelo as infested material has been brought into the area. To date, Hāna, Ke‘anae, and Kipahulū are free of BBTV. 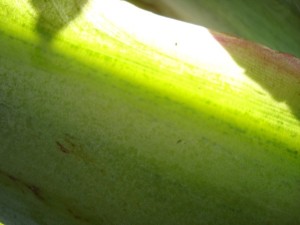 Another indication of BBTV infection is a sporadic dark green streaking, as if in a Morse-code pattern along the leaf sheath. MISC file photo.

Controlling and preventing the spread of BBTV is everybody’s business. If you have banana plants check them regularly for symptoms of the disease. Initial signs of infection are: 1) dark “Morse code” streaks along the leaf stem named for the irregular pattern of dashes and dots along the veins, 2) “J-hooks’ where the leaf veins along the blade of the leaf curve into the midrib. As the infection becomes established, new leaves emerge with difficulty, giving the plant the appearance of having the “bunchy top” that the disease is named for. New leaves are narrow and lance-shaped, often with yellowing around the leaf edges. Plants will stop producing fruit after infected and any keiki from the infected mat are severely stunted.

Check for “J-hooks” along the midrib of the of the banana leaf. This is a symptom of BBTV infection. Photo Courtesy of Scott Nelson, UH-CTAHR.

Controlling the spread of BBTV requires control of the vectors: aphids and movement of infected plants. Regularly spraying your plants with soapy water controls the banana aphid and can help prevent infection. The Maui Invasive Species Committee can help you identify infected plants and will control them for you. Infected plants should be killed on site and left standing until completely dead, typically within six months of treatment. Removing infected plants reduces spread of BBTV; aphids won’t feed on infested plants. Healthy bananas can be replanted in the same place after the mat has completely died.

If you suspect your banana plants are infected with BBTV and live in Maui County, call the Maui Invasive Species Committee at 573-6472.  Due to the risk of BBTV, banana plants should not be moved between communities. “We all want to share bananas. People want to give each other plants, but don’t bring bananas from O‘ahu, Hawai‘i Island, or Kaua‘i,” cautions Kepler. “And whatever you do, don’t take bananas to the Hāna and Kipahulu area.”

Originally published in the Maui News, February 13th, 2011 as part of the Kia‘i Moku Column.
You can find all the articles in the Kia‘i Moku series http://www.hear.org/misc/mauinews/