High atop Haleakalā winds whip across the summit, frost crystals sparkle in the morning sun – melting as the day progresses. But even in this harsh landscape, native plants and animals can thrive – and so can invasive species. 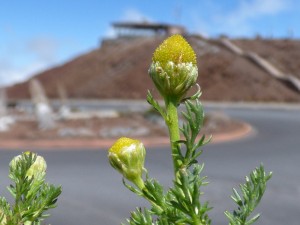 Pineapple chamomile, a native to the Northwestern US and other places, may have been carried to Haleakala summit via a seed on a boot. Photo courtesy of Forest and Kim Starr

One of these invaders is pineapple chamomile–about as authentically Hawaiian as a coconut bikini. But here it is, growing just outside the parking lot of the summit viewing area at 10,032 feet, comfortable in the extreme, high-elevation climate of a Pacific volcano.  It’s no wonder; this aromatic herb’s home range includes a wide sampling of climates and terrains: Western North America from Baja through British Columbia to Alaska, the Russian Far East, and Hokkaido, Japan.

The weed likely hitched a ride up to Haleakalā on a tourist, as seed on a shoe or jacket, brushed off as the unwitting carrier geared up for the crisp mountain climate. This is not unusual. Without realizing it, people carry little hitchhiking seeds throughout the world in their socks and gear.

Pineapple chamomile is a relative of the chamomile in your tea bag and can also be brewed up.  This small shrub thrives in disturbed areas with gravelly soil and full sun, just like Haleakalā. The fern-like leaves are somewhat sticky and the leaves and flowers smell like pineapple when crushed. It has a weedy reputation in many places, springing up across the United States. 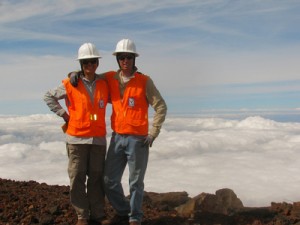 Isolated ecosystems are populated by a relatively small number of plants and animal species, generally highly specialized to survive. But introduced plants or animals often come from diverse environments, populated by many different species, and have developed strategies to compete and survive in their native range. When a plant or animal is introduced to an isolated ecosystem, like an island,  it arrives with a competitive advantage the native species may not have.

In Antarctica, researchers spent 2007-2008 collecting seeds from tourists’ bags and clothing. They found that on average a visitor to Antarctica carried 9.5 seeds along with them. An estimated 33,054 tourists visited the frozen continent during the study period, demonstrating how many seeds could be introduced. Though not all seeds would germinate or survive in their new home, the researchers estimated that as many as 61% of the seeds carried to the Antarctic came from a part of the world with a climate similar enough that they could pose an invasion risk. Researchers working in Antarctica carried even more seeds on their clothing and gear though they visited Antarctica in much lower numbers. 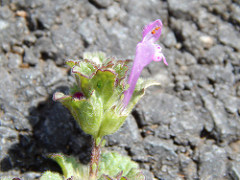 On Haleakalā, botanists Forest and Kim Starr found pineapple chamomile, henbit (a weedy member of the mint family common in North America), and a handful of other non-native plants during their surveys of the high-traffic areas of Haleakalā National Park, a project done in conjunction with the University of Hawaiʻi and National Park Service.

When the Starrs find a single weed or very few in a small area, they can remove the unwanted plants easily. Eradicating an invasive species at this stage of invasion is highly effective, second only to preventing its arrival in the first place.

If the plant has gone to seed, eliminating the resulting seedlings may take multiple visits. Pineapple chamomile has proven a little more persistent than some of the other plants. It produced seeds before the Starrs first found it, so they keep finding a few scattered plants. 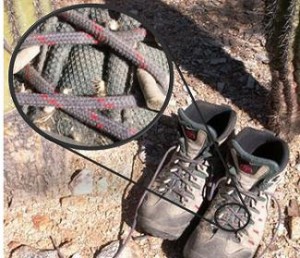 Boots are a notoriously common vector for seeds of invasive species.

The Starrs are careful not to carry hitchhikers when they survey sensitive ecosystems. Follow their lead. Take a minute to brush off your boots, clothing, and gear before traveling or visiting pristine areas. You can help prevent new species from invading in the areas you frequent, whether your expeditions take you to Antarctica, Haleakalā, or the beach.

Written by Lissa Strohecker. Originally published in the Maui News on September 13th, 2015 as part of the Kia‘i Moku Column from the Maui Invasive Species Committee.