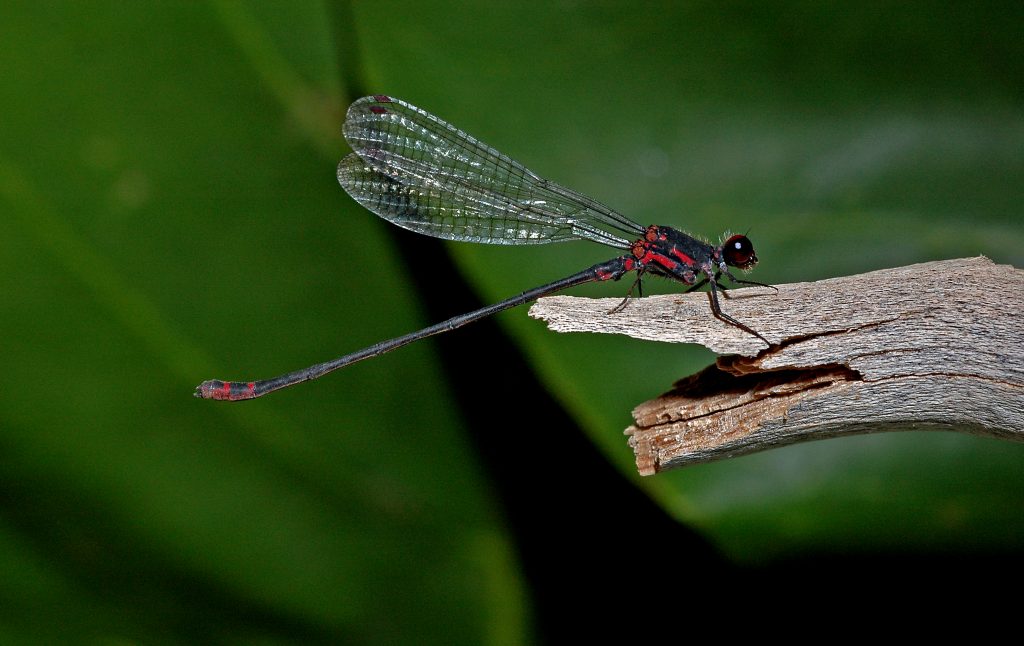 Megalagrion pacificum is an endangered damselfly found on Maui. Evolving over 20 million years of isolation, these native damselflies and dragonflies are threatened by habitat loss and introduced predators like mosquito fish. — U.S. Fish and Wildlife Service / DAN POLHEMUS photo

Twenty million years ago the Hawaiian Island chain was very different from what we see today. Laysan and Gardner Pinnacles were the prominent islands in the archipelago and the main Hawaiian Islands were merely raw lava flowing through the interior of the planet. Around this time a damselfly arrived to the chain, beating the odds in a successful journey across half an ocean.

This single event led to the evolution of some 26 species and sub-species of native damselflies in Hawaiʻi that exist today, according Dr. Dan Polhemus, the Aquatic Ecosystem Conservation Program Manager for the Pacific Islands Fish & Wildlife Office within the U.S. Fish and Wildlife Service. He has studied dragonflies and damselflies throughout the Pacific as well as here on Maui.

Perhaps our most spectacular native insects, damselflies and dragonflies were once widespread throughout the islands. Known as pinao in Hawaiian, these insects now exist only in a tiny portion of their historic range. Introduced predators and habitat loss are to blame. Several species are so rare that they are listed as threatened or endangered. They are often extremely localized; some species are now only found in a single stream.

Pinao adapted to take advantage of the resources available in Hawaiian ecosystems.  They live in a remarkable range of habitats, from mountain streams to marshlands and brackish anchialine pools.

Perhaps because streamflow is often intermittent, some species adapted to survive outside of streams and pools. There are naiads (larval stage of development) that take advantage of water seeps and pockets of rain that collect in the leaves of ʻieʻie vines. One species of damselfly is completely terrestrial – an adaptation existing in only a few other damselfly species in the world.  Their young live in the moist understory of uluhe fern and lack gills found during other damselfly species’ naiad stages.

These hunters evolved eating small insects, both in the water and as they fly through the air. Today, pinao eat a variety of prey, including introduced insects such as mosquitoes. “They are essentially mid-air fighter planes,” says Polhemus. They hunt by folding their legs into a basket to snatch insects from the air. But these aerial predators are prey nowadays.

Lowland marsh and riparian areas have been converted and streams have been diverted. “Intermittent pools have a lot of invasive species,” says Polhemus. Without regular flow to flush out the introduced aquatic species, these pests, such as mosquito fish become established. While the handful of introduced dragonflies have fish avoidance behaviors, the native species, having spent the last 20 million years without predators, are easy prey for non-native fish and other insectivorous invaders. Like native birds in the face of tree-dwelling predators like rats, the larvae are easy picking for voracious mosquito fish. “Where mosquito fish are present, you don’t find native damselflies’” says Polhemus.

Bullfrogs and bulbuls (an invasive bird not present on Maui but found elsewhere in Hawaiʻi) also pose a threat to these ancient colonizers. Bullfrog tadpoles eat dragonfly naiads and bulbuls have been seen snatching the insects from the air.

Ants are another predator. The young naiads climb out of the water to morph into adults on land. Their skin splits open and wings unfold. As they wait for their skeleton to harden and wings to dry they are vulnerable to invasive ants.

There are several species of introduced dragonflies, and most of the dragonflies at low elevation are finddamselflies (distinguished from dragonflies by their ability to fold their wings back at rest) are now found mostly in upper elevations on the Hawaiian Islands, with two species found only on Maui. The largest dragonfly in the United States is found only in Hawaiʻi. Anax strenuus, the Hawaiian giant dragonfly has a wingspan of 6 inches.

You can help protect these unique animals: If you can no longer care for your fish or other aquatic friends, re-home them with someone who can. Never release them into the wild as they can cause ecological damage by pushing out native species, which play an integral role in a healthy Hawaiian ecosystem. Support legislation to maintain streamflow and prevent pollution. To learn more about these fascinating creatures visit: https://dlnr.hawaii.gov/wildlife/files/2013/09/Fact-Sheet-Odonata-damselflies-dragonflies.pdf

This article was originally published in the Maui News on February 11th, 2018 as part of the Kia‘i Moku Column from the Maui Invasive Species Committee.

If you are interested in learning more about the native insects found in Hawai’i, you may enjoy: 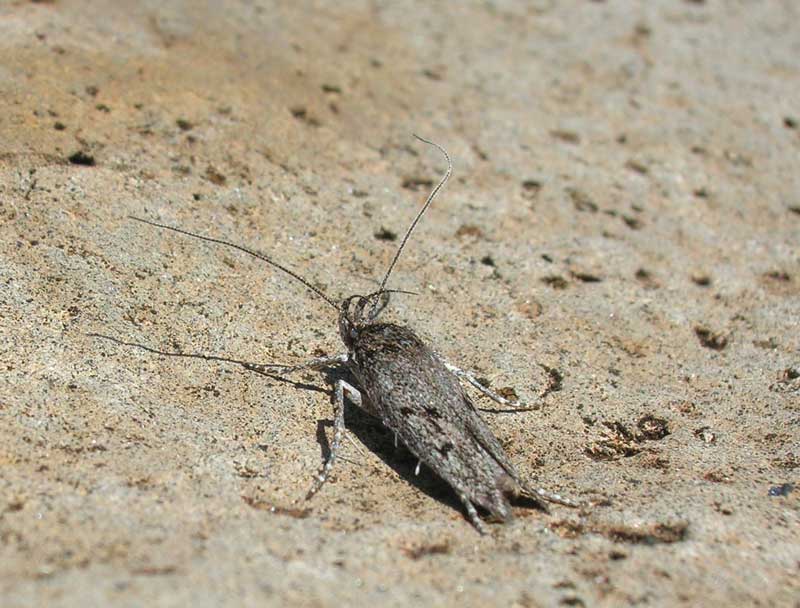 The flightless moth of Haleakalā is one of the more dramatic examples of evolution in Hawaiian insects. Photo courtey of Forest & Kim Starr

The flightless moth of Haleakalā is one of the more dramatic examples of evolution in Hawaiian insects.  Known to science as Thyrocopa apatela, this moth lives only on the barren slopes of Maui’s highest peak. As caterpillars, they spin webs in rock crevices to catch dead leaves blowing past for food. Adult moths hop like grasshoppers across the ground – up to 10 times their body length. Though its evolutionary ancestors could fly, the adults of this species have only partial wings. This unique behavior may have evolved as a result of environmental conditions: high winds and cold may have meant that flight was not an advantage for the moths.

In Hawaiʻi, the climate varies dramatically from one area to another within a short distance. Even if the drizzle never lets up at your house, it could be sunny all day a half mile away. These microclimates create a variety of habitat types that plants and animals have evolved to take advantage of, the tiniest residents included. Native insects and spiders often specialize to survive in their tiny piece of paradise, resulting in the amazing adaptations seen among Hawaiʻi’s insects and spiders.

Of the native Hawaiian insect species, an estimated 98 percent are endemic—meaning they are found nowhere else in the world. Arachnids (spiders) follow suit; an estimated 96 percent of Hawaiian spiders are endemic. The changes that the crawling and flying critters have undergone after arriving in the islands have been dramatic, in part because there are so many varied environmental conditions in a limited area. An ecological niche may be left open that an insect species rapidly adapts to fill. 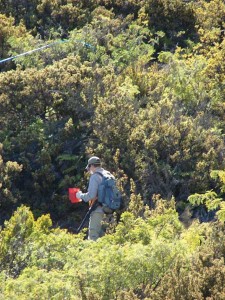 Researchers have been evaluating potential control measures for the invasive Argentine ant. Photo by Forest and Kim Starr.

But today, exotic predators prove to be one of the greatest threats to the flightless moth and other creatures in the alpine environment.  The Argentine ant, Linepithema humile, arrived in Hawaiʻi in 1940, most likely by hitching a ride in military cargo. First detected at Fort Schaffer on Oʻahu, people then unwittingly spread Argentine ants throughout the state; by 1967 ants had been carried to Hosmer’s Grove. Hawaiʻi has no native ants and his alien ant is one of 50 plus ant species accidentally introduced to Hawaiʻi but while most ants live in lower elevations, the Argentine ant prefers the cooler climates of higher elevations

The insects and spiders found in the alpine ecosystem belong to a greater system: the yellow-faced bee and a Hawaiian noctuid moth pollinate silverwords; the silverswords in turn provide habitat for the Hawaiian long-horned beetle, a plant hopper, and the tephritid fly. Extremely rare carabid beetles scavenge a meal from whatever comes their way-researchers only recently rediscovered some of these species, once thought extinct, on the slopes of Haleakalā. The predatory Argentine ant could wipe out this food web shaped over millions of years of evolution. Regular monitoring of Argentine ant populations in Haleakalā National Park has shown that in areas where the invasive ant is present, insect diversity drops by 50 percent and overall insect abundance drops by 65 percent.

Since people first introduced the Argentine ant o Haleakalā, it has spread quickly from the small infestation in Hosmer’s grove. In 1982, a second infestation was found near the Kalahaku overlook on the crater rim. Since Argentine ants don’t have a mating flight, the ants most likely hitched a ride when people inadvertently moved nest material. In Haleakalā National Park the Argentine ant has spread at rates exceeding 150m per year; left unchecked, the ant could cover 75 percent of the subalpine shrubland and Haleakalā crater—critical habitat for many native Hawaiian species.

Researchers have been evaluating potential control measures within the park, particularly for source infestations, such as campgrounds, from which people may unintentionally spread the ant. You can help by making sure your gear and picnic supplies are clean and free of all ants, Argentine or not, that you may have picked up elsewhere in your travels.

Learn more about the native insects on Haleakalā and how the Argentine ant threatens them at http://www.hoikecurriculum.org/unit/good-critters-bad-critters/

Originally published in the Maui News, January 11th, 2015 as part of the Kia‘i Moku Column from the Maui Invasive Species Committee.