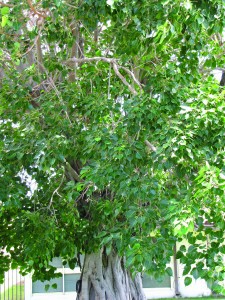 Bo tree, Ficus religiosa, is an attractive ornamental that was once safe to plant in Hawaii. Now the pollinator wasp for the bo tree is in Hawaii and this prolific seeder threatens watersheds. Photo by Forest and Kim Starr

Lori Buchanan, manager of Moloka‘i/Maui Invasive Species Committee (MoMISC), was in downtown Kaunakakai recently when she saw something strange sprouting out of the storm drain. It was a 3-foot tall seedling of a ficus—the very same tree she and her crew are working to remove from Moloka‘i.

Called the bo, peepul, or bodhi tree, Ficus religiosa is planted throughout Asia, Africa, and North America. According to legend, the Buddha sat beneath this species of tree when he meditated and attained enlightenment, hence it’s name. The Hindu deity Vishnu is reputed to have been born under a bo tree. These trees are often planted at Buddhist and Hindu temples. There is a bo tree at the Foster Botanical Garden on Oahu that is said to be a descendant of the tree under which Buddha sat.

Not that long ago, the bo tree couldn’t reproduce on its own in Hawai‘i; it only grew via cuttings. As a member of the Ficus family, it needs a specific wasp to pollinate its flowers in order to produce seeds. That wasp, Blastophaga quadraticeps, was not in Hawai‘i. The wasp crawls inside the minute flower to fertilize it.  In 2007, when seedlings sprang up under the bo tree at Foster Garden, Hawai‘i entomologists knew the pollinator wasp had arrived. 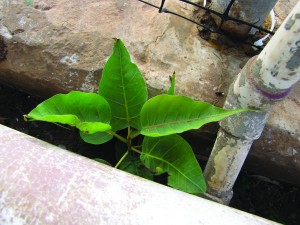 Bo tree seedlings, like this one springing up out of a sidewalk crack on Molokai, indicate the pollinator wasp has arrived. Birds can easily spread seeds into the watershed. Photo by Forest and Kim Starr

The arrival of Blastophaga quadraticeps means that Hawai‘i has joined a relatively small list of places where Ficus religiosa can produce viable seed: India (where it’s native), Israel, and Florida. In Israel, the pollinator wasp fully invaded and Ficus religiosa now ranks alongside other Ficus as invasive and messy.  Now that they produce fruit in Israel, purple figs stain the sidewalks, stick to shoes, and splatter cars left in the shade of a tree.  Motorcyclists dodge slippery piles of fruit and beachgoers clean gummy residue off their gear.

On Moloka‘i, Buchanan isn’t worried about sidewalk saplings—she’s worried about the forests. “Birds spread the seeds and they [Ficus trees] can get into the forest and threaten the watershed,” she says. “They are prolific seeders and seedlings pop up wherever.” Bo tree could start to take over the native forest on Moloka‘i.

Ficus religiosa, like most Ficus, can grow almost epiphytically: a seedling doesn’t need soil initially but roots reach down until the find earth. Bo tree is technically more of a “splitter” than a strangler fig.  Rather than smothering its host in roots, the seeds that sprout in the fork of a tree will send roots through the stem of the support tree, splitting it from the inside. It can find a home in sidewalks and drain sprouts, splitting those apart as well.

MoMISC is actively controlling this species on Moloka‘i, where less than a dozen trees 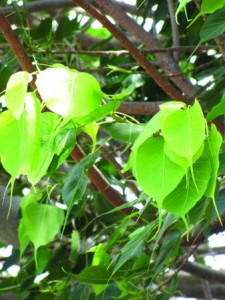 Bo tree can be recognized by the “tail” or drip-tip on the distinctive heart-shaped leaves. Photo by Forest & Kim Starr

were planted. Only one site with mature trees remains, and Buchanan and her crew are busy hunting down seedlings until the landowner agrees to have the plant removed. On other islands bo tree is planted widely enough that resources are too limited to remove it. But choosing to not plant this tree will slow its spread.

You can help MoMISC by keeping an eye out for bo tree seedlings in Central Moloka‘i, specifically in Kala‘e and Kaunakakai. The bo tree has distinctive heart shaped leaves that extend at the tip. According to Buchanan, the plant most closely resembles the Polynesian “canoe plant” milo, which also grows in the same areas on Moloka‘i. Bo tree has more dark green to grey glossy leaves. Any sightings of bo tree on Moloka‘i should be reported to MoMISC, 954-6585.

By Lissa Fox Strohecker. Originally published in the Maui News, October 13th, 2013 as part of the Kia‘i Moku Column from the Maui Invasive Species Committee.