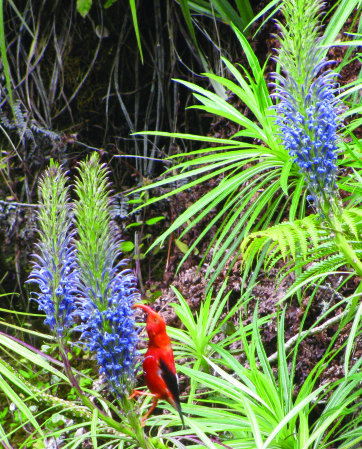 An adult ‘i’iwi sips nectar form the flowers of a native lobelia in the Waikamoi preserve. The habitat for the i”iiwi and other Hawaiian honeycreepers is threatened by climate change. As climate warms mosquitoes that transmit disease to the native birds will increase in range. Photo by Forest and Kim Starr

On just about any given day you can find ‘i‘iwi, among the more charismatic species of Hawaiian honeycreepers, flitting around Hosmer’s grove, just past the entrance to Haleakalā National Park. These energetic little bursts of red flit from tree to tree feeding on the nectar of ‘ōh‘ia flowers and the occasional spider or insect. Once abundant on all islands from sea level up into the mountains, these brilliant birds are now rarely seen lower than 5000 feet. Below that elevation, avian malaria, a bird disease transmitted by mosquitoes, has decimated Hawaiian honeycreepers. Today, even the birds subsisting in the high-mountain pockets of habitat are threatened—not only by invasive plants and animals, but also by climate change.

Avian malaria is not new in Hawai’i. Migratory birds carrying malaria regularly visited Hawaiian shores—but before mosquitoes were introduced, the disease had no way to infect resident bird populations. In 1826, sailors on the whaling ship Wellington dumped barrels of mosquito-infested water into a Lahaina canal. That marked the beginning of the end for low- and mid-elevation native honeycreepers.

Since then, mosquito-born diseases have caused two major waves of extinction in Hawaiian honeycreepers. Native forest birds have shown scant resistance to foreign diseases. Those that survive inhabit forests above the “mosquito line,” where neither mosquitoes nor the diseases they carry can thrive. In cooler temperatures, avian malaria can’t reproduce fast enough to infect birds. Thus the largest populations of ‘i‘iwi dwell in the cloud forests of East Maui and Hawai’i; the birds are increasingly rare or nonexistent on islands without tall mountains. ‘I‘iwi have vanished from Lāna‘i and only a few remain on Moloka‘i and West Maui. With a warming climate, the remnants of disease-free habitat may shrink or disappear. 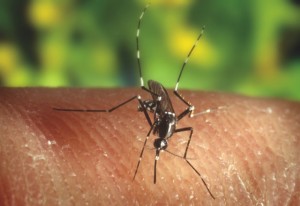 Introduced mosquitoes, such as the tiger mosquito above, transmit avian malaria and pox from non-native birds to native birds. Having evolved in isolation, native birds lack resistance to these diseases. Photo by James Gathany, CDC

And Hawai‘i is heating up. Each decade since 1975, minimum nighttime temperature has increased an average of almost 1°F. Nighttime temperature is the determining factor in estimated elevational range of avian malaria. Over the last 50 years, the mosquito line has steadily marched up the mountain, from 2000 feet in the late 1960s to nearly 5000 feet today.

Climate change may affect our native birds in other ways. Summer storms are predicted to become more frequent, creating more habitat for mosquitoes during their optimum breeding season, increasing their density and the likelihood of transmission of avian malaria. Meanwhile, overall rainfall may decrease, compromising the health of the native Hawaiian rainforest and the inhabitants that rely on it.

The ‘i‘iwi is not the only bird likely to be chased out of remaining habitat by avian malaria and climate change. In Hawaii all of our non-migratory birds, such as the Maui crested honeycreeper or ‘ākohekohe, Maui parrotbill or kiwikiu, and the ‘apapane, face the same danger. These species are unique among the world’s creatures; they exist nowhere else on earth. Many of them are highly significant to the native Hawaiian culture and all play critical roles in their natural environments. Their loss would be devastating.

In response to concerns raised about the ‘i‘iwi’s perilous situation, the United States Fish and Wildlife Service is proposing to list the ‘i‘iwi as federally threatened or endangered, with climate change noted as a factor in its decline. How can you help? Support efforts to address the causes of climate change. Work to protect the remaining natural areas that shelter ‘i‘iwi. And take a trip to Hosmer’s Grove to witness just how spectacular these winged treasures are.

By Lissa Fox Strohecker. Originally published in the Maui News, July 8th, 2012 as part of the Kia‘i Moku Column from the Maui Invasive Species Committee.
You can find all the articles in the Kia‘i Moku series http://www.hear.org/misc/mauinews/