The tale of Hawaiian land snails began millions of years ago as the first plants and animals began to colonize the islands. Researchers don’t know exactly how snails arrived – perhaps stuck to the feathers of a bird or on a floating tree trunk. But in a remarkable story of evolutionary radiation, some 21 or more of those first species that arrived over the millennia gave rise to more than 750 distinct species. Of those, 99% are endemic to Hawai‘i – found here and nowhere else. 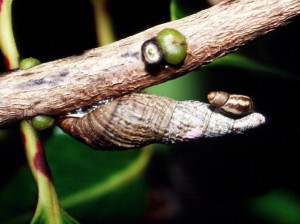 This species of Newcomb’s tree snail used to be widespread on Maui but today is only known from a handful of places in the West Maui Mountains thanks to habitat loss and invasive predators-rats and the rosy wolf snail. Baby snails, like this one riding on mom, are rare. Photo courtesy of Hank Oppenheimer

Famously varied in color and shape, Hawaiians called them pūpū kuahiwi, or high-hill snails. Early Europeans collected these jewels of the forest, selling them as lei or to collectors. These snails are still highly valued. Current efforts focus on saving remaining species; high-elevation snail refuges are built to protect them.

Often native snails are found only on one island, or in a single valley or ridge, teetering on extinction because of habitat destruction, shell collection, and invasive species. Adding to the challenges, many Hawaiian land snails reproduce at what is truly a snail’s pace: some species are 3-7 years old at first reproduction and have only 4-7 young per year. They grow slowly—only 0.2 to 0.4 cm a year. Compare this to the invasive giant African snail (Achatina fulica) which reproduce at one year of age, lays up to 600 eggs annually, and grows about 2.5 cm per year.

One species of snail endemic to Maui, Newcomb’s tree snail or Newcombia cumingi, was once found from Lahaina to Makawao, but like most land snails, has become increasingly rare during the latter half of the 20th century. It was last seen in 1938 by Bishop Museum researchers then rediscovered in 1994 by resource managers with the Maui Land and Pineapple Company’s Pu‘u Kukui Watershed Preserve (PKW).

“One hundred years ago they [native snails] were everywhere,” explains Dr. Kenneth Hayes, a University of Hawai‘i researcher who, along many others, has been working to find out how many West Maui snails remain. Today, 50 percent or more are gone, many turned into escargot for invasive predators—rats, Jackson’s chameleons, and the rosy wolf snail. According to Hayes, the remaining native snails have mostly been relegated to the few areas that still contain native forest, but even these refuges won’t last long if we don’t stem the tide of invasive species. Native snails dine primarily on the fungi that grow on native plants. Invasive plants change the way water moves through Hawaiian watersheds altering the ecosystem by changing what plants, animals, fungi or microbes can live there. The snails’ preferred fungi may not grow in altered habitats.

Pomaikai Kaniaupio-Crozier, conservation manager with PKW, is leading efforts to protect the Newcombia. With US Fish and Wildlife Service funding and partner help they are planning an exclosure in the native forest of West Maui to keep hungry predators from munching native snails.

The West Maui “snail refuge” will be modeled after similar exclosures on O‘ahu, where the O‘ahu Army Natural Resources Program has enclosed three areas to keep out rats, chameleons, and even the predatory rosy wolf snail. A 4-foot tall sheet metal fence topped by a curved lip deters rats and chameleons. Predatory snails face sheet metal at an impossible-to-scale 10 degree angle– if they do manage they hit an electric wire. One fence is equipped with an electronic sensing system that alerts managers via text message if debris falls on the fence.

The first step in protecting Newcombia is a population survey.  “They are the size of a pinky fingernail and very cryptic,” says Kaniaupio-Crozier. “It’s like finding the needle in the haystack, looking for something that small in 8,600 acres.  Up until a couple months ago we were getting pretty demoralized.”

Then they made a remarkable discovery. They found a new population, in totally unexpected habitat. The existing Newcombia population inhabited a wet area with lots of ‘ōhi‘a; the new population was found on ‘ākia, in much drier terrain. “There’s hope there may be another population somewhere else.”

From survey to construction, building the snail refuge will take several years. You can help. PKW is welcoming people interested in habitat restoration, monitoring, even joining in the brainstorming. Contact Kaniaupio-Crozier at pkaniaupio-crozier@mlpmaui.com or by phone, 870-4225. To learn more about the native and non-native land snails of Hawai‘i, contact Ken Hayes, khayes@hawaii.edu, Norine Yeung, nyeung@hawaii.edu, or visit the Hawaiian Land Snail Conservation Facebook Page.

By Lissa Fox Strohecker. Originally published in the Maui News, July 14th, 2013 as part of the Kia‘i Moku Column from the Maui Invasive Species Committee.