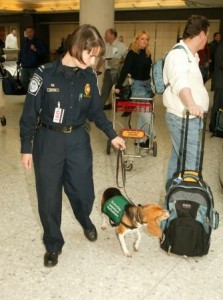 A beagle with the U.S. Customs and Border Protection inspects passengers luggage in an airport. The Hawaii Department of Agriculture has done similar work with dogs in the past; a recent bill passed by the Hawaii State Legislature will help bring the program back. Photo by James Tourtellotte.

This fall there will be some new faces at the Hawai‘i Department of Agriculture (HDOA)– furry faces.   The Hawai‘i  Detector Dog Program is returning, thanks to restored funding from the state legislature and matching federal funds.  Alongside their human handlers, these four-legged inspectors will screen incoming cargo and luggage on O‘ahu to help prevent plant and animal pests from becoming established in Hawai‘i.

Hawai‘i’s detector dogs will be sniffing for brown tree snakes that may have stowed away in shipments from Guam, but they will also inspect other cargo arriving at both the Honolulu airport and O‘ahu military bases, including mail and parcel shipments.

The 20 year-old program was cut in 2009 due to a lack of funds. Prior to the program’s demise, busy beagles and handlers bagged seven snakes in a 14-15 year period. During inspection blitzes at the Maui airport, dogs uncovered more than a thousand instances of undeclared produce and vegetation, including a shipment of persimmons infested with mealybugs not known to be in Hawai‘i. Hawai‘i’s airport dogs also serve as ambassadors for HDOA, letting passengers know with a friendly wag that their luggage was inspected behind the scenes as well as in the baggage claim area.

The new inspectors will be in good company. Man’s best friend, long called upon for helping humans in search and rescue, hunting, and police work, now is lending a nose on a variety of conservation fronts. 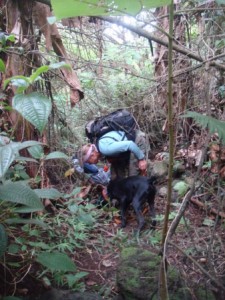 Kristine Lesperance of O‘ahu Detection Dog Services and her lab-mix named Dexter have been working hard to save native Hawai‘i an tree snails, or Achatinella,in the Wai‘anae Mountains.  Dexter sniffs out invasive animals that prey on native tree snails: the cannibalistic rosy wolf snail and Jackson’s chameleon. Dexter can distinguish between a rosy wolf snail, a giant African snail, and native snails by scent.  When he finds one, he sits down and waits for his reward. He can track chameleons by the smell of their scat, a definite advantage for finding these cryptic creatures.

Lesperance says dogs are great for determining the presence or absence of an animal across large areas. Depending on the species the dog is searching for and how odoriferous it is, it may take awhile. With the rosy wolf snail, Dexter doesn’t cue into the scent until he’s one-half inch to two inches from the snail, taking up to 30 minutes to find one; he does better with Jackson’s chameleon scat, finding it from several feet away, but, when working as a search and rescue dog, Dexter can smell a person a quarter mile away.

In Missoula, Montana, trainer Dalit Guscio is about to reward Seamus. He’s been tracking down invasive Dyers woad plants. Seamus and Dalit are with the Montana-based Working Dogs for Conservation. Photo by Elizabeth Stone.

In Montana, dogs are sniffing out invasive plants in the field, outperforming their human counterparts at finding scattered small plants. Elsewhere, dogs are finding bees, pythons, rare plants, cane toads, tortoises, termites, and even root fungus. “I think we could use dogs to find pretty much anything that has a scent,” Lesperance says, adding that further work will help determine how dogs can be most effective in different conservation scenarios.

Although dogs have been trained to help in conservation for 10-15 years, “we’re really just seeing the beginning” says Lesperance.  Our new four-legged recruits will help close gaps in agricultural inspection, but many opportunities exist for canine eco-detection services. Who knows whose nose will be hard at work protecting Hawai‘i?

By Lissa Fox Strohecker. Originally published in the Maui News, August 12h, 2012 as part of the Kia‘i Moku Column from the Maui Invasive Species Committee.
You can find all the articles in the Kia‘i Moku series http://www.hear.org/misc/mauinews/