‘Tis the season, and tradition calls for pine trees to decorate Maui residents’ homes, although there are many palms decorated in Christmas lights as well. Most Christmas trees are shipped in, but there’s a history of growing pines in Hawai‘i. Ralph Hosmer, Hawai‘i’s first forester, came on the job in 1904. At the time, forests throughout Hawai‘i were in a sorry state. Since Polynesian times, people have greatly altered lowland forests, initially for settlement and taro cultivation, then for sugar cane and pastureland. Feral pigs, goats and cattle escaped into intact forests, trampling shallow-rooted plants and browsing slow-growing plants. Honolulu, prospering from the sugar boom, was exceeding existing water supplies by the 1870s. Recognizing the need to protect and restore vital watersheds, everyone from sugar cane barons to King Kalākaua began fencing out animals and planting trees, some of which were pines. 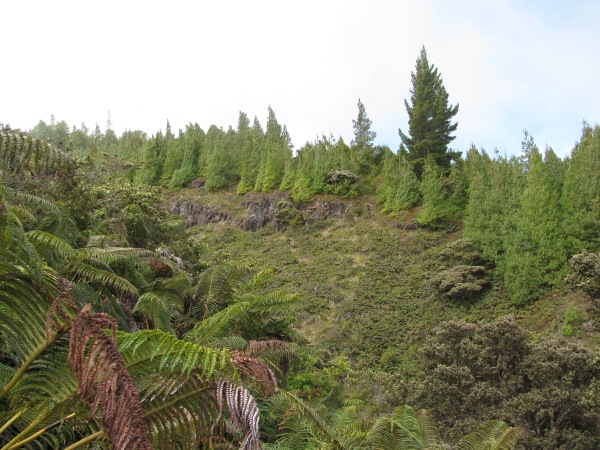 Hosmer helped turn sentiments about forest protection into cohesive action. He established the first forest reserves in Hawai‘i, beginning in 1906 when Alexander & Baldwin ceded management of acreage on Maui to the territorial government. With newly acquired land, Hosmer accelerated efforts to fence out cattle and goats and planted fast-growing hardy trees. The goals were three-fold: to stop erosion, restore the watershed and provide for Hawai‘i’s timber needs. Hosmer’s experimental plantation high on the slopes of Haleakalā now bears his name, “Hosmer’s Grove.” He planted species familiar from his Mainland forestry background: redwood, ash and pines. For years to come, foresters continued planting non-native species. These trees did prevent erosion on overgrazed lands, but some escaped cultivation to invade nearby ecosystems and crowd out native species.

Over the years, crews at Haleakalā National Park have stopped a veritable woodland of pines. Bill Haus and the crew he works with have removed 87,920 pines from the park and surrounding areas since 1982. According to Natural Resource Program Manager Steve Anderson, “Without control, the slopes of the subalpine shrub land would be a pine forest.” Subalpine shrub land is critical habitat for a native plants and animals; conversion to a pine forest would turn this rare Hawaiian ecosystem into a biological desert – no native plants like māmane, pūkiawe, ‘ōhelo or ‘a‘ali‘i; no native birds like the ‘i‘iwi and ‘amakihi. 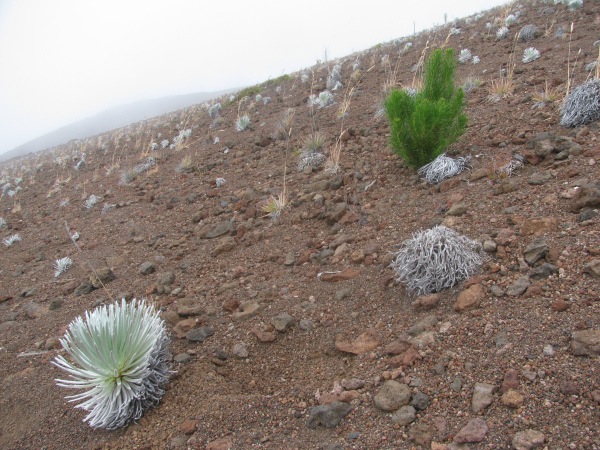 Monteray pine (Pinus radiata) growing inside Haleakalā crater alongside silverswords. There have been a flush of pine seedlings inside the crater in the last few years. Forrest and Kim Starr photo.

Pines threaten the crater as well. Haus and his crew have removed more than 1,500 pines from inside the crater, with a peak of 778 in 2010.

Anderson said: “I wouldn’t have thought it was possible (for the crater to become a pine forest) several years ago, but it’s clear that potential exists now.”

The recent flush of pine could be the result of the 2007 Polipoli fire. Pines, including those invading Haleakalā Crater, are serotinous, meaning certain pine cones are coated with a waxy substance. These cones stay closed until the heat of a fire melts the coating to release seeds. As an ecological adaptation, it helps pines take advantage of the ash-fertile conditions following a fire. But in Hawai‘i, this adaptation may offer a unique seed-scattering advantage. The Polipoli fire possibly spurred a huge seed release and associated winds carried the seeds into the crater. Pine seedlings are even growing alongside silverswords.

You can help protect the crater from pines, and take home a pine tree! Several organizations will be working with volunteers to remove pines in time for the holidays. Friends of Haleakalā National Park leads efforts to remove pine trees from the crater. Check out their website at fhnp.org for more information.

The Nature Conservancy will be working below Hosmer’s Grove on Dec. 17. Call or email Pat Bily at 856-7665 or pbily@tnc.org for details and to confirm attendance. Both trips are free and open to the public. Dress for wintery weather and bring rain gear, water, tools and rope to bring home your tree or wreath making supplies. Participants also may bring food. Eggnog is optional.

By Lissa Fox Strohecker
Originally published in the Maui News, December 11, 2011 as part of the Kia‘i Moku Column. Check out all of the MISC articles in the Kia`i Moku series at: www.hear.org/misc/mauinews/