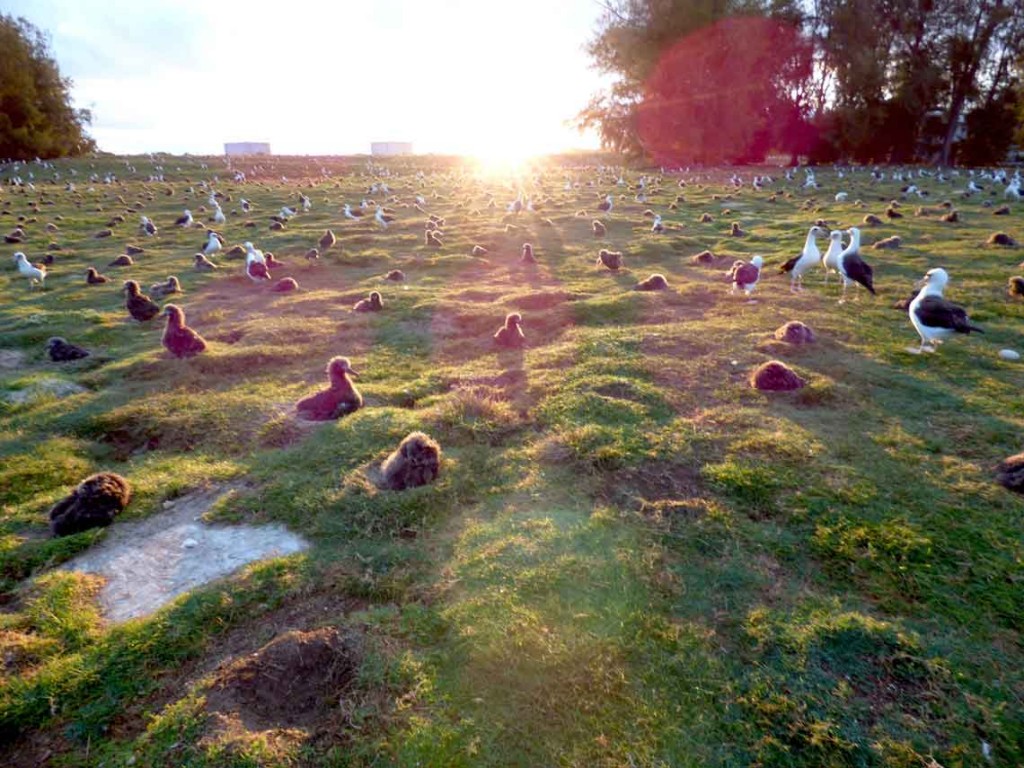 Space is at a premium for nesting Laysan albatross on Midway atoll. Removal of the invasive golden crownbeard may have helped provide more nesting area. Photo by Forest and Kim Starr

Midway Atoll has gone to the birds. Every year 3 million seabirds flock to 1,500 acres of land 1200 miles northwest of Honolulu. The former Naval Air Station is also the most remote seabird colony in the world, home to 1.5 million Laysan albatross (65% of the global population) as well as 19 other species of seabirds – shearwaters, terns, boobies, noddies, curlews, and most recently, the translocated Laysan duck. But albatross and their feathered kin were not nearly as plentiful some years ago.

Hungry rats that devoured seabird eggs were the most obvious cause, but after rats were eradicated in the 1990s and seabird populations began to rebound, biologists were concerned that the birds’ continued recovery was blocked – literally – by an invasive plant. 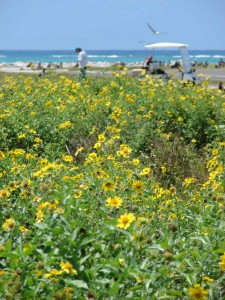 Golden crownbeard, or Verbesina encelioides, is an aggressive annual herb from the desert southwest. This yellow-flowered daisy-like plant grows head-high, creating a dense barricade that seabirds can’t walk through, much less nest in. For the birds who do find a place to lay their eggs, the tangle of flowering stems limit airflow to nests, leaving chicks vulnerable to dehydration and death.

Like all invasive species in Hawaiʻi, golden crownbeard made the long journey to the Islands with the help of people. In 1903, the Commercial Pacific Cable Company was building a trans-Pacific cable and Midway was one of three intermediate stations, along with Honolulu and Guam. To transform a seabird colony into the semi-permanent home of a handful of cable operators, the Company constructed four two-story concrete buildings and shipped over 9,000 tons of soil from Hawaiʻi and Guam so the new human residents could plant shade trees and grow food. It’s possible that seeds of golden crownbeard were mixed in the soil or on equipment, but it’s equally plausible that the new islanders or later residents stationed there with the military planted this North American native as a reminder of home.

Regardless of how it arrived, golden crownbeard flourished in the harsh tropical sun. This weed is the most invasive of the more than 225 non-native plants on the low-elevation islands of Midway. It’s very drought tolerant and needs only a monthly sprinkling once the roots are established.  This yellow scourge goes from seedling to flowering plant within months of germination and a single plant can produce 350 seeds. 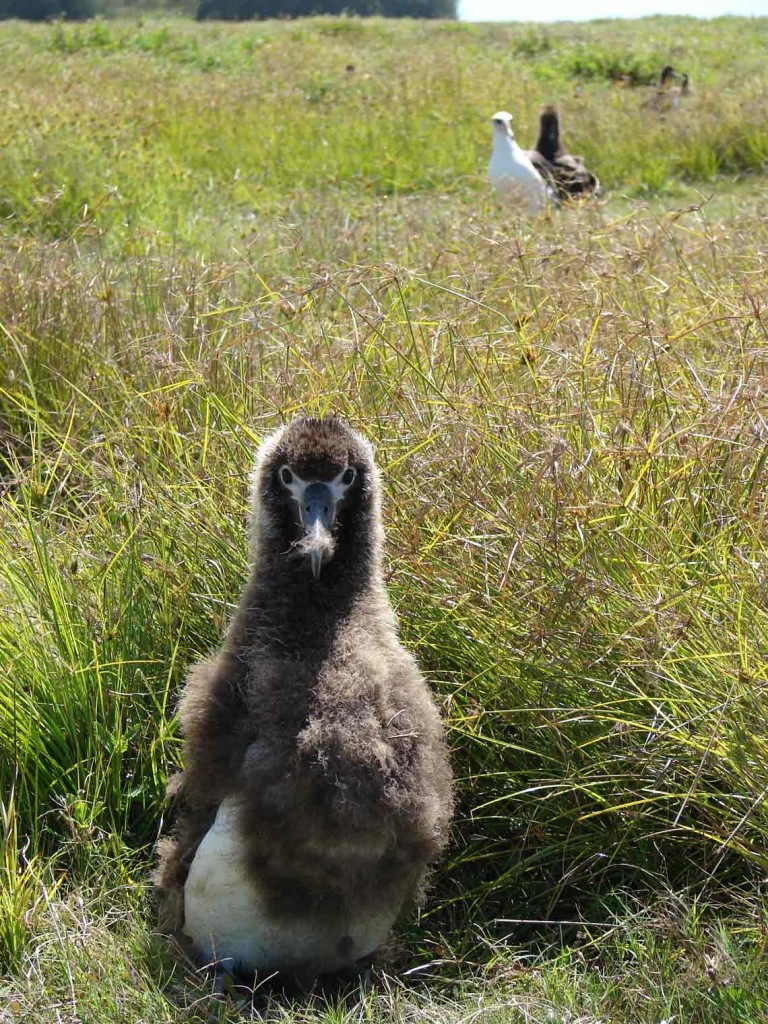 Native Cyperus grass is replanted on Midway after invasive species are removed. The native grasses allow for more airflow to the nest as well as more space to build nests. In 2012-2013 Laysan and black-footed albatross nested at near-record levels. Photo by Forest and Kim Starr

Only a few years ago, golden crownbeard covered 80 percent of the three islands that make up Midway. In the late 1990s, the US Fish and Wildlife Service began removing the head high plants. With more funding the work pace quickened; crews head out almost daily to spray this pest. Tractors or heavy equipment can’t be used with so many seabirds above and below ground, so hand spraying is the way to go. All this work is starting to pay off.

Golden crownbeard will hopefully be eradicated from the smaller Eastern Island and Spit Islands by early 2017. The last batch of seedlings will be removed from the bigger Sand Island by 2018.  As the invader is knocked back, the native grasses and coastal plants are being replanted to stabilize dunes and protect the reef.

The seabirds seem pleased with the efforts to restore their habitat. In 2012-2013, Laysan and black-footed albatross nested at near-record levels, though biologists won’t know if this increase is a result of the golden crownbeard removal efforts for several more years.

To learn more about golden crownbeard and the amazing birds on Midway visit the Friends of Midway Atoll website: www.friendsofmidway.org or the Papahānaumokuākea website: www.papahanaumokuakea.gov

Originally published in the Maui News, August 9th, 2015 as part of the Kia‘i Moku Column from the Maui Invasive Species Committee.