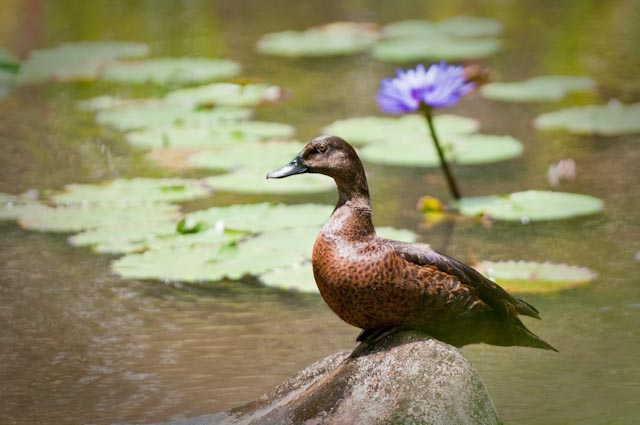 This koloa landed at a water lily farm in Huelo. Most koloa on Maui are likely a mallard-koloa hybird, but this one, far from the Kanaha and Kealia Ponds may be related to Koloa released above Keanae. Photo by Masako Cordray.

About 1.5 million years ago a handful of stray mallard ducks made their way to the Hawaiian Islands. They came from North America and found a hospitable home in Hawaiʻi.

Mallards are remarkably adaptable: they are omnivorous and will eat virtually anything. They can make a home in saltwater, brackish water, and freshwater wetlands.  No one knows exactly where in Hawaiʻi these avian settlers first arrived—but we do know that Maui was still Maui Nui at the time, still connected to Molokaʻi, Kahoʻolawe, and Lānaʻi. The conglomerate island was huge: at its peak, 1.2 million years ago, Maui Nui measured 5,640 square miles, 40% larger than modern day Hawaiʻi. It featured vast plains, marshlands, and a giant wetland, no doubt attractive to ducks and other water birds.

Isolation and time combined to create the conditions for something completely different; over generations, those few pioneer mallards evolved into a brand new species – common throughout the Hawaiian Islands, but found nowhere else in the world: the koloa, or Hawaiian duck. While mallards are loud and gregarious, koloa are quiet, and live in pairs or alone. Koloa are slightly smaller than their mallard ancestors. They like wetlands but also live in mountain streams, deftly navigating tight corridors and dense forests up to 10,000 feet. Koloa made their way into the legends of Hawaiʻi. When Imaikalani, a chief in Ka‘ū on Hawaiʻi Island, lost his eyesight, koloa acted as his scouts, alerting him with quacks about where his enemies hid in the forest.

In the mid-1800s these birds were common on all the main Hawaiian Islands except Kahoʻolawe and Lānaʻi. But as people filled the wetlands to make room for ball fields, car dealerships, and shopping malls, the koloa lost much of their nesting habitat. Introduced rats and mongoose stole koloa eggs and preyed on their young. By the 1950s, those impacts, combined with the onset of turn-of-the-century hunting, had caused our native ducks to disappear from Maui and most of the other main Hawaiian Islands. In the 1960s, koloa were listed as an endangered species; today, the largest population of koloa is found on Kauaʻi. There, they number fewer than 2,000 birds.

To help the species recover, the State of Hawaiʻi began reintroducing koloa throughout the Islands, drawing from the Kauaʻi population. In 1989, they released 25 birds on Maui at Kanahā Pond and in Piinau Valley above Keʻanae. Unfortunately, these koloa faced another obstacle to survival: genetic dilution.

In the late 1800s, non-native mallards were introduced to Hawaiʻi, this time in large numbers as game birds and pets. By 1980, healthy populations of feral mallards occupied many of the wetland areas throughout the state. Koloa and mallards long ago diverged into two distinct species but they can still mate and produce fertile hybrid offspring. Today, all of the koloa at Kanahā and Keālia ponds are hybrids. As generations pass, the hybrids are becoming less and less koloa. Eventually the unique genetics of the koloa could disappear entirely, rendering the species extinct.

These feral mallards are different from the migratory versions that show up in small numbers every year. The migratory birds are not in the mood for romance when they reach Hawaiʻi, so there is no chance of hybridization. The resident mallards are more domesticated and aggressive. They pose the greatest threat to the re-establishment of the koloa.

Today, the Kauaʻi population is home to a healthy population of pure koloa, thanks to efforts to remove rats and feral mallards at their breeding sites (koloa on Kauaʻi do not have to contend with mongoose). With continued protection, biologists are hopeful for the recovery of this species and its reintroduction throughout the state.

As for Maui, there are no immediate plans to reintroduce koloa. According to Dr. Fern Duvall, Maui Nui Program Manager with the Department of Land and Natural Resources, koloa may still occur in the mountain streams above Keʻanae, offspring of the birds released in 1989. To protect these rare Hawaiian ducks and ensure their successful reintroduction in the future, we must reduce existing mallard populations. Don’t feed mallards or feral ducks. If you happen to be a duck aficionado, keep your pets contained and their wings clipped. Never release your feathered friends into the wild.

Written by Lissa Strohecker. Originally published in the Maui News on July 10th, 2016 as part of the Kia‘i Moku Column from the Maui Invasive Species Committee.