Five years ago, people living in the Puna district on Hawaiʻi Island started seeing native ʻōhiʻatrees in their yards dying. First, the leaves on a single limb or the whole tree would start to yellow and brown. Within days or weeks, the tree would be dead. “Trees look burnt or frozen,” explains Dr. Flint Hughes, a research ecologist with the USDA-Forest Service. He’s one of several scientists investigating the cause of Rapid ʻŌhiʻa Death, an apt description for a disease causing ʻōhiʻa to die so fast they don’t have time to drop their leaves. 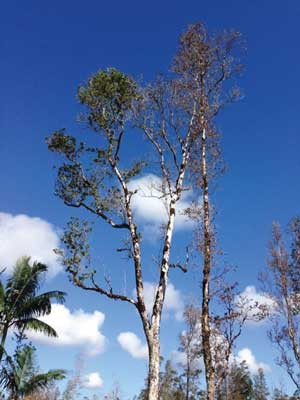 Symptoms can appear in a single branch or the entire canopy of a tree. Pruning the affected brance will not save the tree since the Ceratocytis fungus is already established in throughout the tree. Photo by J. B. Friday

The disease spreads across landscapes nearly as fast. In 2012, it had killed ʻōhiʻa across about 1000 hectares (nearly 2500 acres). By last summer, it covered 6000 hectares. Healthy trees, young trees, old trees–it doesn’t matter—once symptoms appear, the tree will be dead within weeks.

A disease this virulent is potentially catastrophic for native species and watersheds. ʻōhiʻa are a keystone species for a Hawaiian rainforest. Like the uppermost stone in an arch, ʻōhiʻa is critical to the structure and function of the forest, both as refuge for native birds and other species, and as an effective way to transform what falls as rain into what comes out of the tap.

Last year, Hughes and his colleagues began to research what was happening. They knew it was a new phenomenon and not related to any previously known problems in ʻōhiʻa, such as ʻōhiʻa dieback or ʻōhiʻa rust. Within six months they had isolated the pathogen causing Rapid ʻŌhiʻa Death. The disease is caused by a fungus, Ceratocytis fimbriata. It gets into the sapwood of ʻōhiʻa, stopping the tree’s ability to transport water and sugars. “The fungus essentially strangles the tree,” says Hughes.

The ceratocytis fungus responsible for killing ohia accross 15,000 acres on Hawaii Island can be seen as a dark staining in the sapwood. Photo by J.B. Friday

Isolating the cause of Rapid ʻŌhiʻa Death, also called Ceratocytis wilt of ʻōhiʻa, is the first step. Ceratocytis has been present in Hawaiʻi for decades. In the Islands, it’s known only as a pathogen on sweet potato and taro, never before attacking ʻōhiʻa. In other parts of the world, Ceratocytis infects sycamore, eucalyptus, mango, coffee, cacao, citrus, poplar, fig, and rubber trees.

Researchers have yet to determine the origin of this recent outbreak—more than likely a new, more virulent strain of Ceratocytis was introduced but it is possible the existing strain jumped to ʻōhiʻa.

One of the researchers’ top priorities is determining how the disease is spreading. Other places 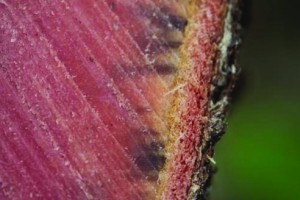 in the world, insects and contaminated equipment are vectors for spreading Ceratocytis, and that could be the case in Hawaiʻi. Until that’s determined, Hughes urges people not to move ʻōhiʻa—logs or seedlings. The fungus can survive in dead logs for a year or more. He suggests that it’s even possible that Ceratocytis spores may land on plants growing near ʻōhiʻa and movement of those plants may spread the disease

On Hawaiʻi Island some of the nicest stands of low-elevation ʻōhiʻa are gone, but researchers are not giving up. “One of the hopes is that we’ll see some genetic resistance in ʻōhiʻa, or there may be environmental constraints,” says Hughes. On Hawaiʻi Island, Ceratocytis has been found as high as about 1,400’ elevation in Mountain View, but that may reflect the relatively recent introduction rather than the full extent of its potential range. 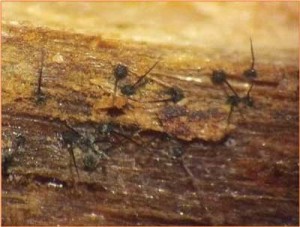 Fungal spores of Ceratocytis on a dead log. The fungus can survive in dead logs for a year or more, and the disease can infect the plants for 2-3 months before symptoms appear. Help stop the spread by not moving ohia-logs or seedlings. Photo by J.B.Friday

They do know that the fungus can be present for months before any symptoms appear. During pathogenicity testing, ʻōhiʻa trees showed symptoms two or three months after inoculation. Pruning a symptomatic branch will not necessarily protect the tree as the fungus may have already spread throughout the tree and possibly to nearby trees.

Researchers have much to learn about Ceratocytis wilt on ʻōhiʻa. For now, they encourage people to clean boots and equipment after working on infested trees and caution against interisland movement of ʻōhiʻa logs and seedlings.  Rapid ʻŌhiʻa Death is only known to occur on Hawaiʻi Island. If you are on Maui or elsewhere in the Islands and see symptoms:  leaves quickly turning yellow or brown, dead trees looking burnt or frozen with leaves still in place, or tell-tale brown streaking on the dead wood, contact Hughes by phone, 808-854-2617, or e-mail fhughes@fs.fed.us Learn more online at http://www2.ctahr.hawaii.edu/forestry/disease/ohia_wilt.html

Originally published in the Maui News, May 10th, 2015 as part of the Kia‘i Moku Column from the Maui Invasive Species Committee.