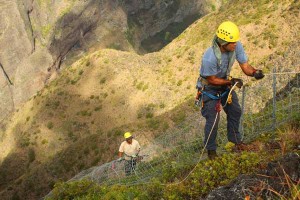 Crew with the West Maui Mountains Watershed Partnership build fence in some of the most difficult terrain imagnable. This and other resource managment efforts are possible thanks to the work behind the scnese at the Pacific Cooperative Studies Unit. Photo by Chris Brosius

On any given day, there are hundreds of people at work throughout Hawai‘i to protect the ‘āina.

These people all have one thing in common: the Pacific Cooperative Studies Unit, based out of the Botany Department at the University of Hawai‘i at Mānoa. The unit’s staff works behind the scenes, helping project managers buy helicopter time, hire staff and pool funds from different sources so that conservation crews can stay in the field and focused on their work.

The Pacific Cooperative Studies Unit began 40 years ago when the University of Hawai‘i was providing scientific services to the state’s national parks.

Today, the unit facilitates funding for many of the “boots on the ground” projects throughout the state. It enables multiple funders and agencies to work together. In Maui County, the unit administers three watershed partnerships, two bird projects, one seabird project and two invasive species committees. Each of these projects has field staff, baseyards or offices, vehicles and equipment to maintain, safety concerns and multiple funding sources.

They work on land that falls under various types of management, from private to public and county to federal. A project might have funds from 10 different sources in one year, each with different deadlines and contract requirements. Having a single organization to pool and manage these resources allows the project to remain effective.

Despite supporting 350 staff across five islands and an annual budget of approximately $12 million per year, the unit is a surprisingly low-key organization, an approach mirrored in the philosophy of Unit leader David Duffy, a professor of botany with UH- Mānoa.

“We’re not top down. We try to give projects as much autonomy as possible,” he said.

So, the unit’s role in protecting natural resources in Hawai‘i may be overlooked.

One of the main benefits the unit offers its projects is flexibility. “We can do things that other people can’t, and we can do them faster,” Duffy said. State and federal organizations can be limited by mandates and jurisdiction, whereas a unit project may work wherever the need is.

Need drives the continued presence of the unit. If invasive species were no longer a threat, or endangered plants were safeguarded across the archipelago, it could go by the wayside. “In the best of worlds, we would go away,” Duffy said. “We continue to exist because we’re useful.”

The unit’s efforts mean that researchers and field crews can get the funding needed to continue monitoring and preserving rare native ecosystems across the ‘āina.

By Lissa Fox Strohecker. Originally published in the Maui News, September 14th, 2014 as part of the Kia‘i Moku Column from the Maui Invasive Species Committe