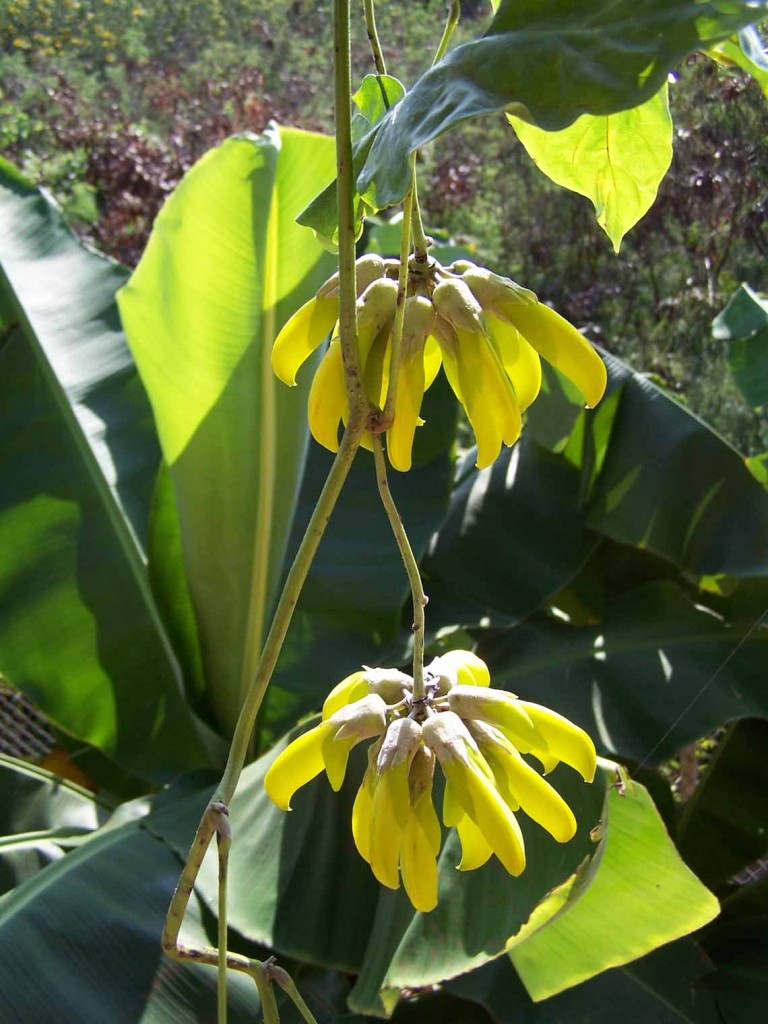 The prickly seed pods on this climbing vine led to a concerned Ha’iku resident reporting it to MISC as a potential invader. Turns out it is a native plant, Mucuna sloanei. Photo by Hank Oppenheimer

“Anything that bristly has got to be invasive,” said the Haʻiku resident who reported a vine that she found in the gulch on her family property. She called the Maui Invasive Species Committee (MISC) when neither she nor her relatives could identify the strange climber with seedpods covered in fiberglass-like hairs. No one in the family had noticed it before and they had worked or played in the gulch since small-kid times. She collected a specimen, prickly seedpods and all, and brought it into the MISC office.

Though bristly, it turned out not to be an invasive species after all. The unusual creeper was a native plant once widespread in low elevations on Maui and other Hawaiian Islands. Commonly known as seabean, botanists call it Mucuna sloanei.

Mucuna comes in two varieties: sloanei, indigenous to Hawaiʻi; and persericea, endemic to windward East Maui and found nowhere else in the world. There are only a few of the persericea plants left. Because of the rarity of the persericea variety, and the damage caused by pigs and cattle to its habitat, the vine was recently listed as endangered by the U.S Fish & Wildlife Service. The possibility that it could be thriving in a Haʻiku gulch, only a stone’s throw from the Haʻiku Marketplace, was therefore pretty exciting. But it takes an expert to know the difference between the two varieties and Hank Oppenheimer fits the bill.

Oppenheimer is the Maui Nui Coordinator for the Plant Extinction Prevention Program (PEPP), a Pacific Cooperative Studies Unit project that works to protect the most rare and threatened plants in Hawaiʻi. Throughout the state, a handful of people like Oppenheimer and technician Keahi Bustamente hike deep into remote forests, scaling cliffs and doing whatever they can to prevent the rarest species’ extinction. This includes collecting seeds from rare Hawaiian plants, propagating them in greenhouses, and then outplanting the precious plants in protected habitat.

For plants, garnering listing as a PEPP species of interest is a mixed blessing; it means there are less than 50 individuals left in the wild. Oppenheimer is investigating the distribution of persericea to determine if it should be included with the other 236 PEPP targets. 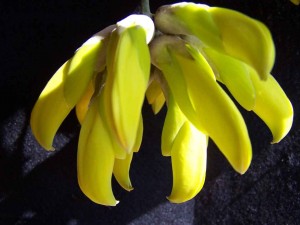 Finding the native Mucuna sloanei was a pleasant surprise. Photo by Hank Oppenheimer

Oppenheimer and Bustamente headed to the Ha’iku gulch. The vine turned out to be the more common sloanei, but Oppenheimer was still excited. “It was really interesting to see Mucuna in a place like that,” he said. Most of the habitat for Mucuna has been turned into pasture, farmland, or long ago taken over by invasive plants.

But as the team was leaving the gulch, they made a troubling discovery. Bustamente noticed an unusual plant with massive 2-3 foot long leaves, purple on the underside. He knew it instantly as miconia. This notorious pest and MISC target was certainly out of place; miconia is primarily between Keʻanae and Hāna. The discovery marks the westernmost naturally occurring plant in recent history.

So when the Haʻiku resident reported what she thought was an invasive vine, she actually helped uncover a relatively rare native species as well as one of the most invasive plants in Hawaiʻi. A great example of the more you look, the more you find. 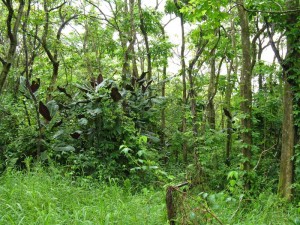 Can you spot the miconia plant? The characteristic large leaves with purple undersides cued botanists into this plant’s presence in a Ha’iku Gulch. MISC file photo

To learn more about the Plant Extinction Prevention Program, visit the website www.pepphi.org. And if you think you may have Mucuna on your property, contact Hank Oppenheimer at henryo@hawaii.edu. If you would like help identifying an unusual plant, native or not, you can find a number of resources available online, including the Flikr site “Hawaii Plant ID,” curated by some of the state’s best botanists, or you can call MISC at 573-6472, particularly if you think you’ve found miconia.

Originally published in the Maui News, April 12th, 2015 as part of the Kia‘i Moku Column from the Maui Invasive Species Committee.