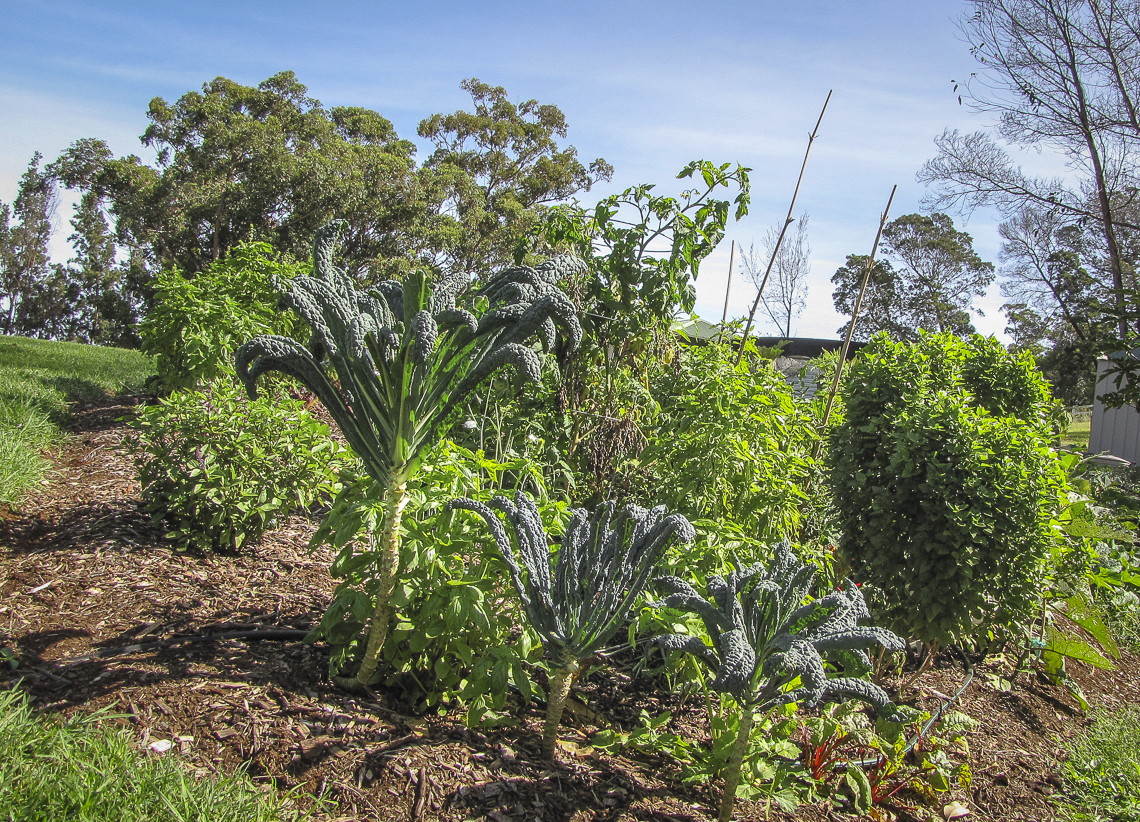 Hawaiʻi is a gardenerʻs paradise, but slug control is critical given the presence of the rat lungworm parasite. Photo by Forest and Kim Starr

Rat lungworm disease: It may be rare but it’s memorable–like a horror movie come to life. Nightmarish tales of muscle spasms, temporary paralysis, and comas stemming from rat lungworm infection circulate on the news and the coconut wireless. Most cases in the Islands have been on Hawaiʻi Island but a few have occurred on Maui. 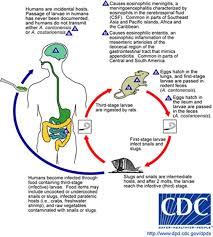 Humans are an accidental host for the rat lungworm nematode, but ingesting the nematode can have severe consequences. Graphic by Centers for Disease Control.

Rat lungworm is a parasitic nematode that—as you might guess from its name—infects the lungs of rats. If the parasite stayed in the rat, few of us would be concerned, but because part of the nematode’s complex and bizarre life cycle occurs in other common animals, people are at risk. Eggs laid in a rat’s lungs hatch and the microscopic larvae travel through the rat’s digestive tract, ending up in the animal’s poop. Mollusks such as slugs and snails feed on this, allowing the nematode to develop further inside its second host. When infected mollusks are eaten by a rat, the parasite travels first to the rat’s brain, then to its lungs, and the cycle repeats.

Unfortunately, slugs end up on the menu for other animals, humans included. Gardening in Hawaiʻi means dealing with cryptic, slithering pests, which often find their way into the harvest. A tiny slug tucked in a fresh batch of greens is easily overlooked.

“Don’t eat out of the garden without first washing the produce,” cautions Lynn Nakamura-Tengan, an extension educator with the College of Tropical Agriculture and Human Resources on Maui. She specializes in food safety and nutrition.

Always wash produce to remove any stowaway slugs that could carry the rat lungworm parasite. Photo by Forest and Kim Starr.

Eating a stowaway slug can come with serious consequences. If the slimy pest that slipped into your salad or smoothie carries nematode larvae, you become an accidental host. The larvae will travel through the bloodstream to the brain, but in humans they go no farther. The larvae continue developing as they crawl through the brain and eventually die—in the process, they trigger an infection causing eosinophilic meningitis, a swelling of the lining around the brain. The number of nematode larvae consumed determines the severity of the infection. Signs of rat lungworm disease range from flu-like symptoms, muscle spasms, and headaches, to temporary paralysis, nerve damage, coma, and even death.

Infected slugs or snails can climb into catchment tanks and drown, releasing microscopic nematode larvae that float around in the water and remain infectious for up to 3 days. If people use untreated catchment water for drinking or for brushing teeth, they can contract the disease.

The first cases of rat lungworm disease in Hawaiʻi occurred in the 1960s. Infections have recently spiked in the Puna area of Hawaiʻi Island. One reason is the presence of a semi-slug—a small slug with a partial shell that is invading Puna. The semi-slug’s life cycle and behavior may lead to a higher concentration of nematode larvae and a higher risk of passing the disease on to people.

That said, many mollusks common on Maui can carry the rat lungworm larvae, including giant African snails, golden apple snails, and the Cuban slug. Even the slime trail left behind can carry the parasite, though slime is not as likely a source of infestation.

Once a person contracts rat lungworm, there is no known treatment, therefore prevention is the key. 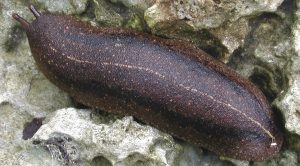 The Cuban slug is one of the common slugs on Maui and a carrier of rat lungworm. Photo by David Robinson of USDA-APHIS.

How can you avoid getting rat lungworm? Keep the critters away. “Be mindful of pest management,”   advises Nakamura-Tengan. Regularly control rats, slugs, and snails.  There are many methods, including those appropriate for organic gardens. If you hand pick slugs or snails, wear gloves and dispose of the slugs in the trash so pets don’t eat them. Dogs and horses have contracted rat lungworm disease, though no cases have occurred in cats. It’s unknown whether chickens can be infected, but studies from Australia show parrots are vulnerable to the disease.

Most importantly: hold off on the garden snacks until washing. “The cute picture of the kid eating a strawberry straight from the garden makes me cringe,” says Nakamura-Tengan. Wash, wash, and then wash your produce again, inspecting each leaf under running water as you go. A slug can often survive a hurried rinse in the sink. There is no benefit to using vegetable washes (dilute solutions of bleach, vinegar, or saltwater) to remove slugs – plain running water does the trick. Dispose of heavily contaminated produce or kill the parasite by cooking or freezing.  If you have a catchment tank, take measures to keep slugs and snails out and filter water appropriately.

Keep gardening and growing your own vegetables – the presence of rat lungworm in Hawaiʻi is no reason to stop healthy eating practices. It is a good reason to be mindful about controlling pests and washing your produce- good habits in general.

You can help; survey your yard or farm for slugs and snails and report your  findings here:

Written by Lissa Strohecker. Originally published in the Maui News on March 13th, 2016 as part of the Kia‘i Moku Column from the Maui Invasive Species Committee.