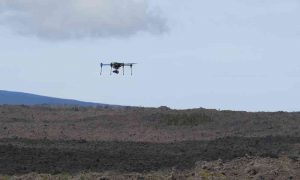 Would you rather walk across this lava field to look for invasive plants or search by air? Drones are increasing the efficiency of invasive species field crews on Hawaiʻi Island. Photo by T. Sullivan, BIISC.

Your mission: find a few invasive silk oak trees scattered across a 35,000-acre ancient cinder cone that resembles a bundt cake. Dead-ends and backtracking are the norm as you navigate up and down and across the slope, trying to locate and reach the trees.

Such is the task facing the crews of the Big Island Invasive Species Committee (BIISC) as they endeavor to control silk oak trees on the slopes of Puʻu Waʻawaʻa (literally translated to “many furrowed”) near Kona. They now have help from a set of eyes in the sky.

Using a drone, or unmanned aerial vehicle (UAV), the crews can find the best path across the landscape, saving time and allowing them to more efficiently do what they do best: get rid of invasive plants.

“It works best on a large landscape,” explains Timo Sullivan, BIISC’s early detection and remote sensing specialist. “You can trade 8 hours of hiking for 2 hours of controlling,” he says. Sullivan’s work with BIISC began a few years ago when they were exploring ways to identify invasive Australian tree ferns hidden within vast eucalyptus plantations. Today, the drone is almost a part of the field crew, scouting out the best route or even finding plants the crew is searching for. 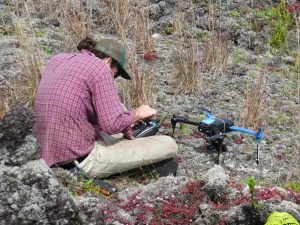 “It works best with species you can see above the canopy” he says. BIISC relies on UAVs to help survey for rapid ʻōhiʻa death, a fungal disease affecting ʻōhiʻa  trees on  Hawaiʻi Island. The main symptom: the leaves turn brown almost overnight, as though frozen in place. “It’s surprisingly hard to tell if a tree in the canopy is dead when you are on the ground,“ says Sullivan.

Typically, he arrives at a field site a few hours before the crew and spends an hour flying the drone, followed by an hour viewing the footage on the laptop. Then the crew can head straight to the plants on the ground. It’s possible for Sullivan to cover 40 acres in an hour. This is a big shift from the past efforts where crews spent all day hiking to find maybe 10 plants. “It’s been a huge morale booster,” he says. “Crews feel more successful when they can actually remove plants rather than search for them all day.”

The drone BIISC uses is nothing fancy, just a consumer model with a GoPro attached to record what’s seen. The footage can be reviewed on the spot or later. Instead of three sets of tired eyes scanning from a helicopter, the footage can be shared with many, including researchers looking at native plants or other aspects of the landscape. A manager can see what the crew faces, as well as document change over time.

The technology has limitations though: searching for plants under the canopy is still a task for ground crews, and the drone has to remain in the line of sight of the operator. Surveying in Kīpahulu valley while sitting miles away in Makwao is currently not possible.

Miconia (circled in red) has large leaves with a distinctive leaf pattern. Researchers at the University of Hawaiʻi are looking at ways to train computers to analyze drone footage to find miconia. Photo courtesy of T. Sullivan, BIISC.

Researchers are investigating ways to take drone usage to the next level. Roberto Rodriguez, a PhD student at the University of Hawaiʻi-Manoa is helping to determine the ideal speed at which to review footage. Heʻs researching computer programs that analyze the footage. “Miconia is a nice initial plant to work with,” he says. “The large leaf size and distinct vein pattern is something a computer could identify.” They researcher can then take what they learn and modify it for other species.

Ground crews can’t hang up their boots entirely. They can’t get ahead of an invasive species’ seeding cycle until they remove every young plant before it goes to seed—and small understory plants typically aren’t visible from the air. Drones are just another tool. There may come a day when crew each has its own drone, enabling workers to easily glance at a gulch or a steep, inaccessible cliff to make sure no invasive plants remain.

To learn more about research and drone usage for conservation in  Hawaiʻi check out http://spatial.uhh.hawaii.edu/index.htm.

This article was originally published in the Maui News on April 9th, 2017 as part of the Kia‘i Moku Column from the Maui Invasive Species Committee.