Ginger Johnson bought a hapu‘u fern late in 2013 to plant alongside others in her yard. 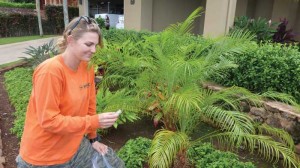 But when she heard the news in early January that inspectors found a new species of fire ant hitchhiking from the Big Island to Maui in hapu‘u , she thought of the hapu‘u  she had just brought home. What if the ants had infested her yard? “I was very concerned. I went and looked at it and didn’t see anything.” Johnson left the hapu‘u in the shade of a tree, uncertain about what to do.

“I called a friend of mine who happened to be a biologist. He advised that I do the peanut butter and chopstick test.” The simple test, placing a peanut-butter smeared chopstick near material that may carry little fire ant, will attract many ants, including Wasmannia auropunctata, the little fire ant (LFA). Johnson tested but did not find any ants that resembled LFA, which are tiny (as long as a penny is thick) and uniformly light red in color. She was still concerned and called the Maui Invasive Species Committee (MISC) for further assistance.

Crews from MISC arrived, bagged the hapu‘u to contain any ants, and took it to the Hawai‘i Department of Agriculture (HDOA) where entomologists examined it for LFA. No suspect ants were found. But because the hapu‘u had been at Johnson’s house for a little while, MISC workers surveyed her property. They’ll return several times to ensure LFA weren’t introduced. This new pest is so damaging, it’s worth the extra effort to prevent it from becoming established on Maui.

Little fire ants can be hard to find when first introduced. Workers may not be foraging far from the queen, and even if several colonies are present, these miniscule insects are very hard to detect. Bait (like the peanut-butter-smeared chopstick) must be placed every two feet or closer. By the time the ants are stinging people or blinding pets, the population may have been present for months or years.

Little fire ants on the large end of a chopstick. Photo courtesy of the Hawaii Department of Agriculture.

These opportunistic ants don’t build mounds; rather they find shelter in leaf litter, under rocks, or in loose tree bark. Little fire ants are insidious invaders. They don’t announce their presence by swarming feet and legs; instead, they sting when they are trapped against skin or in clothing. Establishing nests in trees and amongst ground cover, LFA can reach densities of 20,000 workers per meter, or a whopping 155 ants in a square inch. At that level, painful encounters become unavoidable.

So: if it’s small, call. MISC will survey your property, using peanut butter to attract ants. Alternatively you can submit a sample to MISC. Expert taxonomists review all ants collected. If they suspect little fire ants, they’ll take the sample to HODA for confirmation.

Little fire ants are not known to be established on Maui, Lāna‘i or Moloka‘i; though small infestations have been detected and controlled on Maui and Lāna‘i. Resources exist to stop this pest in its tracks. An interagency team made up of the Hawai‘i Department of Agriculture, Hawai‘i Ant Lab, and Maui Invasive Species Committee will respond to any new infestation in Maui County.

Inspectors at the Kahului airport destroy any little-fire-ant-infested shipments they find, but some might slip through. No organization has the resources to survey all of the places or pathways LFA could travel. If you have brought any soil, potted plants, or vehicles from off-island in the last year, take time to test for LFA. Waiting until you are stung is too late.

“I’m tremendously careful now,” says Johnson. “Someone just told me the other day they got a magnolia tree from the Big Island. My first thought was: how well did you test it?”

To learn more about the little fire ant, including detailed instructions for how to survey, visit the Hawai‘i Ant Lab’s website at littlefireants.com. The HDOA site at  hdoa.hawaii.gov/pi/main/lfainfo/ has updated information on spread. If you suspect you may have LFA, please don’t try to treat them yourself– contact MISC at 573-6472 or the Maui branch of HDOA at 872-2848. “The issue is so frightening,” says Johnson. “I’m born and raised here, so I’ve seen many things change. The only time to deal with something like this is before it’s a disaster.”

By Lissa Fox Strohecker. Originally published in the Maui News, May 11th, 2014 as part of the Kia‘i Moku Column from the Maui Invasive Species Committee.