The native Hawaiian ecosystem is often described as fragile and prone to invasion, so it may come as a surprise to find that some of our island species on the most unwanted list of invasives in other parts of the world. 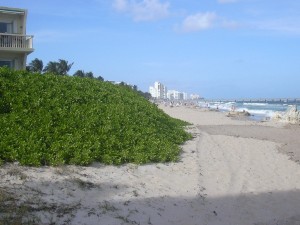 In Hawai‘i, beach naupaka decorates miles of coastline, but in Florida this attractive plant is listed as a state noxious weed. Known as Scaevola taccada to the scientific community, naupaka outcompetes the endangered Scaevola plumieri native to Florida. In the Caymen Islands in the Carribean, where naupaka is also invasive, there is some concern that sea turtles may not be able to access nesting sites with mounds of naupaka blanketing the coasts. Naupaka was introduced to Florida as a landscaping option. 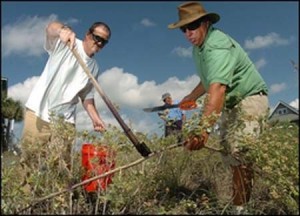 In Hawai‘i, pōhinahina, Vitex rotundifolia, sometimes known as beach vitex, grows alongside naupaka but it’s wreaking havoc elsewhere. Pōhinahina is a sprawling coastal shrub with small purple flowers. Landscapers introduced pōhinahina to the Southeastern and Mid-Atlantic States, where it now smothers coastlines, choking out native plants like the endangered sea beach amaranth. Pōhinahina is a noxious weed in North Carolina. Virginia has enacted a statewide quarantine in hopes of stopping its spread. Communities gather regularly to fight back this kudzu of the coastline. 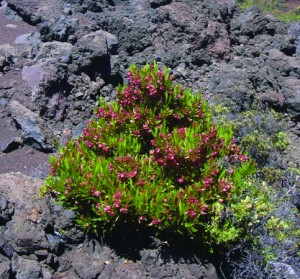 This ‘a‘ali‘i grows on the slopes of Haleakalā, but it has also taken over rangeland in Kenya. Photo courtesy of Forest & Kim Starr.

‘A‘ali‘i, or Dodonaea viscosa, is another hardy Hawaiian native that’s problematic elsewhere. This drought tolerant plant grows in central Maui and up the slopes of Haleakalā. It’s a tough shrub with distinctive winged seedpods, and, as it turns out, doesn’t taste so great–at least to the cattle of Kenya and Uganda, where ‘a‘ali‘i takes over rangeland.
Like many of Hawai‘i‘s native plants, these species are indigenous to Hawai‘i, meaning that they are native to Hawai‘i as well as other places. Naupaka is native throughout the Pacific and India, growing on coastlines from Okinawa to Oman and from Micronesia to Madagascar. Pōhinahina’s native range stretches across the Pacific Rim and into Southern Asia. And ‘a‘ali‘i is a cosmopolitan species found from Florida to the Sonoran deserts into Mexico and across the Pacific to New Zealand and Australia.
These three plants have developed ways to spread their keiki far and wide: plentiful seeds that float and survive a long bath in salt water. ‘A‘ali‘i seeds spread inland by catching the wind and by sticking to the feathers of birds. These strategies help explain why these plants are native to such a huge area, and how they were able to reach Hawai‘i. But when these plants are released from the checks and balances found in their native habitat–competition with other species, predation by insects, even climate and geography–there’s a possibility of a problem.
An invasive plant is not inherently bad; it has developed strategies necessary for its survival. In Hawai‘i these three plants play an important role–protecting beaches from erosion and providing habitat for native animals. However, what constitutes a means to survive in one place can translate into an invasive characteristic elsewhere. It’s just a matter of the right plant in the right place.

By Lissa Fox Strohecker. Originally published in the Maui News, November 11th, 2012 as part of the Kia‘i Moku Column from the Maui Invasive Species Committee.
You can find all the articles in the Kia‘i Moku series http://www.hear.org/misc/mauinews/