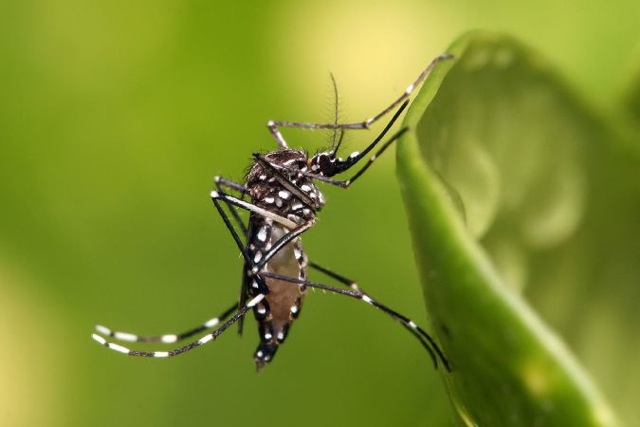 Aedes aegypti is famous the world over for spreading dengue. This species is not established statewide, but it has shown up at the Honolulu International Airport five times since January of 2012. Photo by Muhammad Mahdi Karim

Back in 2001, several East Maui residents started reporting fever, body aches, and rashes. One of the people sickened had just traveled in French Polynesia during a dengue fever outbreak. The Department of Health eventually confirmed 20 cases of dengue fever in East Maui and a crew hired with funds allocated for environmental emergencies went to work removing mosquito habitat. What made this outbreak interesting was that it was spread by the tiger mosquito, Aedes albopictus, common in Hawai‘i.

“We may be the only place in the world to confirm [that] dengue could be spread by the albopictus mosquito. It’s not an efficient carrier of the disease,” explains Gary Gill, Deputy Director of the Environmental Health Administration with the Hawai‘i Department of Health. “In places where dengue is endemic [regularly occurring], it is the aegypti mosquito that is the carrier.”

The invasive mosquito, Aedes aegypti, is famous for spreading dengue. Neither the mosquito nor dengue is widespread in Hawai‘i. Both periodically appear, but luckily not at the same time. Though conditions are prime as Hawai‘i is a global hub for tourism and commerce..

Dengue outbreaks in Hawai‘i are rare and typically occur when someone travels to an infested area, returns to Hawai‘i and is bitten by a mosquito, as happened in 2001. According to Gill, immediate family members and neighbors are at risk, but the common tiger mosquitoes rarely eat from more than one source. The female mosquito finds a person (or animal), and, given the chance, feeds until her belly is about to burst.

In contrast, Aedes aegypti flit from person to person, taking a blood meal from multiple people and spreading any disease carried by the bloodsuckers. Aedes aegypti is not normally found on O‘ahu. “We have not, up until last year, identified any aegypti since the 1940s,” says Gill.

In January of 2012, a Department of Health entomologist collected a trap containing what was later identified as Aedes aegypti at the Honolulu International Airport. “We’ve found aegypti five times in the last year.  Every indication is that this mosquito is either living and breeding at the airport, or it is regularly being reintroduced,” Gill says.   Mosquitoes can survive in the cabin, cargo hold, or underbelly of an airplane coming from an infested area. Aedes aegypti are originally from Africa but have spread to tropical and sub-tropical regions of the world including Mexico, Asia, and Australia. 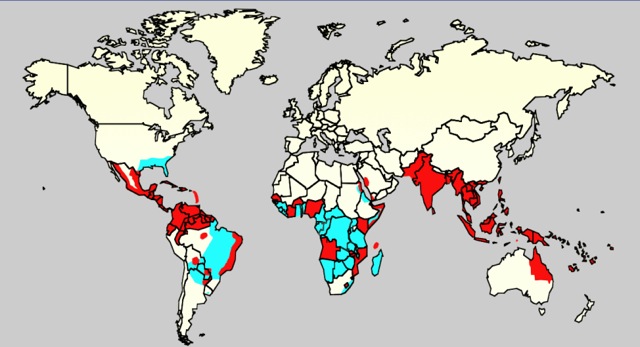 From a public health standpoint having a thriving population of dengue-spreading mosquitoes at the airport is a worst case scenario according to Gill. “A person carrying the virus walks through the airport, and then it spreads to any number of people at the airport who will then take it to wherever they are going. A single population of aegypti could easily spread dengue throughout the state. A dengue-carrier mosquito would be a concern for people who come here as much as for people who live here.”  If Aedes aegypti became established throughout Hawai‘i, it would set the stage for a consistent presence of dengue, like does in parts of Central and South America, India, Southeast Asia, and Africa.

Ongoing surveys for mosquitoes are the best way to ensure early detection of this species. The Department of Health continues to monitor mosquitoes at Honolulu International Airport, but surveys are limited to that airport and don’t include surrounding areas. Funding cuts in 2009 gutted the Department of Health. At one point 40 people worked on O‘ahu on environmental health but now only seven positions remain. Staff cuts throughout the state have left no capacity for mosquito monitoring elsewhere. “What’s at Kahului? We have no idea,” worries Gill.

The Department of Health is working with Hawai‘i’s Departments of Agriculture Transportation to explore options for mosquito surveys at airports and harbors statewide. They are working to reduce mosquito habitat at the airport, removing bromeliads and dark undergrowth and replacing it with less mosquito-friendly landscaping. Gill encourages homeowners to do the same, along with removing or changing water in outside open containers every week. For now it’s our best hope. Unless and until capacity is restored at the Department of Health, early detection of this devastating mosquito is up to the public.

By Lissa Fox Strohecker. Originally published in the Maui News, August 11, 2013 as part of the Kia‘i Moku Column from the Maui Invasive Species Committee.