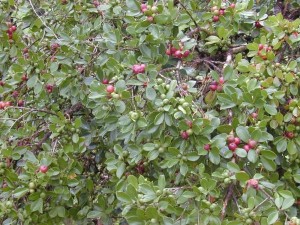 The fruit if strawberry guava are eaten by birds that spread the tiny seeds. Photo by Forest & Kim Starr 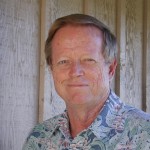 When I came to Maui 28 years ago to work as a research biologist at Haleakala National Park, one of the first things I learned was that strawberry guava (Psidium cattleianum) was regarded as the most damaging invasive plant in the state. A year later, I was in Kipahulu Valley and experiencing the amazing guava fruiting and dispersal season. The 10-30 foot tall trees left a sea of red fruits that still lurks in my memory. There were dense, extensive guava thickets of tens of acres at the 2,000-3,000 ft elevation level in the valley. One could scarcely walk through; there were literally no other species present. These devastated areas contrasted sharply with the rich biodiversity in nearby areas with intact native understory vegetation. 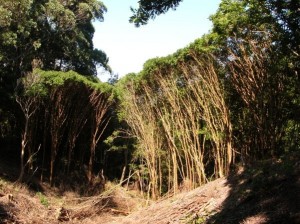 A dense infestation of strawberry guava, or waiawī , in the Makawao Forest Reserve. Photo by Forest and Kim Starr

At that time, C.H. Diong, a graduate student at UH-Manoa, was putting the final touches on his Ph.D. thesis. Diong showed that feral pigs had been the primary agent spreading strawberry guava from the mouth of the valley upslope for the past 30 years or so. The pigs fed almost exclusively on guava fruits during September-December.  The seeds pass through the pigs’ digestive tracts with no loss of viability. Fruiting was occurring only below about 3000 ft elevation but the seeds could germinate and grow much higher, up to over 4000 ft in the valley.

Years later, my colleague Dr. Art Medeiros did his Ph.D. thesis on the biology of weeds in Kipahulu Valley and East Maui. Art estimated that strawberry guava already occupies over one-third, or 8900 acres, of its potential area of dominance on East Maui.  Although feral pigs had been eliminated and fenced from Kipahulu Valley since the late1980s, Art found that non-native birds, primarily the red-billed leiothrix, were also spreading strawberry guava seeds. Strawberry guava plants were still not fruiting above 3000 ft, but seeds planted experimentally (or those carried by birds or pigs) germinate at much higher elevations. Strawberry guava now reaches as high as 5300 ft on East Maui in at least one location. 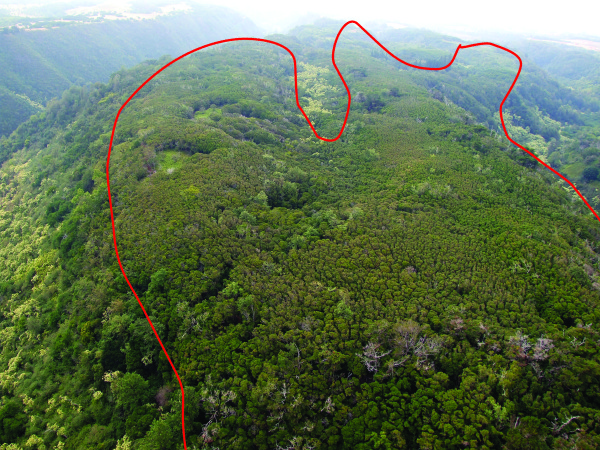 Strawberry guava has infested the outlined area on Mahana Ridge, just to the east of Honokahua Valley in West Maui. Photo by Randy Bartlett.

Newly established guava plants can spread vegetatively by root sprouts. On all the major islands, nearly monotypic guava stands infest thousands of acres of moderately wet (mesic) and very wet forest. Strawberry guava is considered a serious threat to native forests due to its ability to invade relatively undisturbed areas and form thickets with dense mats of feeder roots. Dense invasion allows only about 5% of sunlight into the understory. The guava at first invades under native canopy, then expands and closes the mid-level canopy position, preventing the establishment and regeneration of all other species, including the dominant native forest plants – ohia and koa. Although it continues to expand into relatively pristine native forest areas, strawberry guava is now so widespread in Hawaii that its future impacts are expected to consist mainly of filling in areas creating monotypic stands.

As one of the founding members of the Maui Invasive Species Committee, I never considered taking on strawberry guava as a MISC target given its wide distribution and abundance and MISC’s limited resources. We always hoped for the eventual possibility of identifying an effective biological control.

A generally accepted theory of biological invasions is that certain plant species, held in check by insects and pathogens in their home range, become invasive in their introduced range where those insects and pathogens are lacking. Strawberry guava seems to fit the “enemy release” theory perfectly. In Hawaii, it is currently attacked by no insects or pathogens.

The first biocontrol researcher for this species, Dr. Charles Hodges, traveled to coastal Brazil in 1988 and reported that strawberry guava occurs not in dense stands but as scattered trees and rarely in small clumps. He noted that “few trees were observed that had not been attacked by at least one kind of insect,” and “often four or five types of insect damage could be identified on the same tree.” After 20 years of research to determine the best potential biocontrol agent, the scale insect Tectococcus ovatus has jumped through all the hoops but one – public opinion.

Lloyd Loope is a research scientist with the U.S. Geological Survey stationed at the Haleakala Field Station.  He holds a doctorate in botany from Duke University and is an active member of the Maui Invasive Species Committee.

Originally published in the Maui News, September 14, 2008 as part of the Kia‘i Moku Column.
You can find all the articles in the Kia‘i Moku series http://www.hear.org/misc/mauinews/