Over 1,000 ships enter Hawaiʻi’s ports and harbors every year. Coming from throughout the Pacific and Oceania, bringing cargo and vacationers to the islands. Below deck, they risk carrying stowaways – fragments of algae and other marine critters – on their hulls and in the ballast water. Moving throughout the world and between islands, boats inadvertently carry marine organisms from place to place. Some of these become invasive in their new habitat.

“Hawaiʻi has the most non-native aquatic species of any place in the United States,” says Jules Kuo, the Hawaiʻi Ballast Water and Hull Fouling Coordinator with the Department of Land and Natural Resources. She works with boat owners and captains of all types of boats from large shipping companies and cruise lines that move globally to recreational and fishing boats hopping between islands to keep new non-native species out and limit the spread within the state.

Hawaiʻi’s marine environment, like the terrestrial environment, evolved in relative isolation. The near-shore reefs glitter with colorful coral, fish, seahorses, urchins, and other creatures, some of which live nowhere else in the world.

Hawaiʻi has the highest rates of endemic marine species: 18% coral and roughly 20% of fish are found here and nowhere else. Important for tourism and residents alike, these reefs are threatened by an onslaught of species arriving from around the world. Once here, marine species can’t be fenced out or weeded.

New marine organisms can make it to Hawaiʻi either by clinging to the hull of a boat or carried in ballast water, seawater stored in tanks to provide stability. Warm temperatures and a lack of predators increases the likelihood that some species will grow unchecked and threaten reefs and human health. Researchers suspect at least one species of box jellyfish made it to Hawaiʻi as an undetected hitchhiker.

A 2014 study identified dirty hulls as the main pathway for non-native marine organisms arriving in Hawaiʻi. According to Kuo, within hours of being in the water, ship hulls begin to develop a slime layer as bacteria build up on the hull. The longer a ship sits, the more slime it will develop. Slime is a drag, literally; it increases friction and fuel costs. But from the perspective of invasive species risk, slime is a foothold for other marine life: algae, sponges, barnacles, clams, and more.

One person for 1,000 ships means Kuo can’t personally inspect every boat bottom and ballast tank so she’s developed a priority setting matrix combining information about the ship’s port of origin, how long it was in port, and if species have been detected before to determine which boats to visit. She collects samples of ballast water and checks the hull for fouling, but most of her effort is spent working with captains and owners on the steps they can take to proactively prevent hull fouling and ballast water contamination: regularly cleaning the hull, using anti-fouling paint, and exchanging ballast water in the open sea, far from where algae and critters can be taken up.

“Initial introductions most often happen with commercial vessels but recreational boats carry species throughout the state,” says Kuo For example, the Mycale armata sponge, a conspicuously bright orange sponge from Australia in a Kāneʻohe Bay and other harbors on Oʻahu has spread to Kahului Harbor. Kuo is trying to better understand what species are were introduced by installing autonomous reef monitoring structures (ARMS) in harbors statewide. The ARMS are PVC pipe attached to a plate that mimics coral habitat, Kuo then checks the stations every year to see what has shown up. She is also working with other states along the Pacific Ocean to provide education on simple steps recreational boaters can take to protect Hawaiʻi’s marine environment. These include:

This article was originally published in the Maui News on March 14, 2020 as part of the Kia‘i Moku Column from the Maui Invasive Species Committee.

Each year over ships make over 1000 trips to Hawai‘i. Container ships and barges, fishing boats, cruise 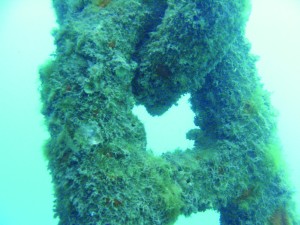 ships, and sailboats, aircraft carriers and military ships come bearing cargo for Hawai‘i or stop over on their way across the Pacific. Any of these boats could carry tiny stowaways from distant places, and that has resource managers concerned. Even an interisland boating trip could translate into trouble for your local reef.

“The majority of Hawai‘i’s aquatic invasive species came in via ballast water and hull-fouling,” explains Sonia Gorgula, the state coordinator recently hired by the Hawai‘i Department of Land and Natural Resources’ aquatic division to address the problem. Ballast water is taken by ships at sea or in port to maintain stability, and can contain organisms or larvae that may be harmful when released into a new environment, oftentimes thousands of miles from where they originated. Hull-fouling, or bio-fouling refers to the plants and animals that grow on any aquatic vessel, be it ship or yacht, dingy or dock. When these living organisms reach new waters, they can cause problems.

Of the two types of marine contamination, Gorgula says biofouling is the bigger worry in Hawai‘i. One species introduced this way is snowflake coral, a fast-growing soft-coral from the Caribbean. Since arriving in Hawaiian waterways, it has devoured the zooplankton that supports the marine food web and destroyed numerous black coral colonies. Hypnea, the rank invasive algae that washes up on Maui beaches, spread between the Islands attached to the underbelly of a fishing or sailboat.  Hypnea is not only stinky and expensive to deal with on the beach, it outcompetes native limu.

Biofouling happens on any type of vessel, ocean or freshwater, that remains in port or dock long enough for organisms to become attached. “Broadly speaking it’s mussels, algae, barnacles,” says Gorgula. “When you start to see an assemblage become quite dense, you can even find crabs.” Boats function as floating reefs, transporting these aquatic aliens to Hawai‘i, where they may or may not find a home.

“Some species arrive and establish, then fail. Yet many species become invasive here that were not thought to be invasive until they get here,” says Gorgula. “Often there’s not enough information to predict what will become invasive.” One way to approach the situation is to treat all biofouling as harmful and focus on prevention—keeping boats with Hawai‘i on their itinerary free of small stowaways. 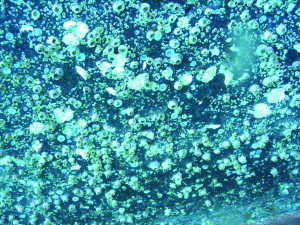 Biofouling is a drag, literally. Barnacles colonize the hull of a ship and reduce fuel efficiency as well as pose a risk of becoming invasive. Photo courtesy of Hawaii DLNR-DAR

Most commercial ships have incentives to keep hulls relatively free of growth; biofouling creates drag that reduces fuel economy. But other hidden “niche” areas underneath the boat—propellers and intake pipes used to pull in water for cooling the engine and fire-fighting—often house alien species. Cleaning the hull is part of regular boat maintenance; focusing on niche areas will help prevent the spread of hitchhikers. Certain paints are designed specifically to discourage fouling, and hidden spots can be painted as well as hulls, simple steps that feed into regular maintenance.

Policies and regulations for ballast water are well established worldwide, but biofouling has only received attention of recently. One of Gorgula’s tasks is to develop policy to protect Hawai‘i. “The biofouling policy issue is complex,” she says. “Around the world, only California, New Zealand, and Australia have developed policy. Globally, there aren’t many people working on it. We’re forging new territory” In 2007 the state legislature approved rules requiring ships planning to release ballast water to exchange the water first in the open ocean more than 200 nautical miles out to sea, reducing the likelihood ballast water will contain organisms that could find safe haven in Hawai‘i

It may seem trivial n a world of big ships and global transportation, but paying attention to the details can 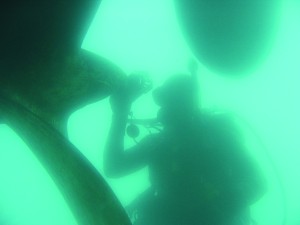 A diver inspects a propeller for biofouling. Photo courtesy of Hawaii DLNR-DAR

make a big impact. Every boat, even those going interisland can help stop the spread of invasive aquatics. “Clean off biofouling in the same port where it accumulated,” says Gorgula. Be sure to clean your hull, anchor, props, bilge compartment, and any associated gear in the same watershed to prevent its spread to other watersheds and islands.

By Lissa Fox Strohecker. Originally published in the Maui News, January 13th, 2013 as part of the Kia‘i Moku Column from the Maui Invasive Species Committee.
You can find all the articles in the Kia‘i Moku series http://www.hear.org/misc/mauinews/