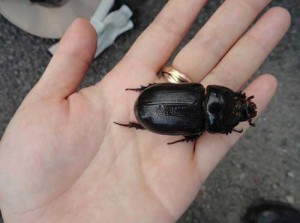 At over 2.5″ in length, the Coconut Rhinoceros Beetle would seem hard to miss, yet it spends most of it’s life in the crown of a palm tree. Photo courtesy of Hawaii Department of Agriculture.

At two and a half inches long and sporting large horns on the front of its head, the coconut rhinoceros beetle (CRB) is a remarkable-looking creature, but this lumbering giant of an insect is also a devastating pest of coconut and palm trees. Following its arrival on Palau in 1942, this critter from Southeast Asia quickly spread widely, wiping out 50 percent of the palms in the archipelago.

On December 23, 2013, during a routine survey of the Joint Base Pearl Harbor-Hickam, surveyors discovered the coconut rhinoceros beetle in palms on the base, marking it the first reported case of the insect in Hawai‘i.

Teams mobilized to survey the surrounding area and control the infestation. Based on the size of the population, the beetle may have been present for up to two years.

Populations of the beetle in its home range are kept in check by natural controls (predators, disease, and competition) but globalized shipping has transported the beetle throughout the Pacific; it has become a major palm pest, affecting the Philippines, the Republic of Palau, Fiji, American and Western Samoa, and most recently Guam. It has spread elsewhere in the world, hitching rides in the holds of aircraft, through nursery stock, cargo, mulch and sawdust. 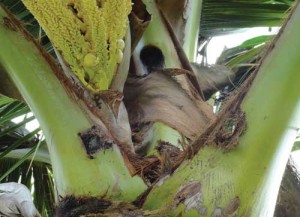 The beetles leave boring holes in the crown of coconut palms. Photo courtesy of HDOA

When coconut rhinoceros beetle was detected in Guam in 2007, Hawai‘i officials grew concerned that the pest would make its way here, given the regular exchange of goods between the islands; however, it’s not known how the beetle arrived in Hawai‘i, nor where it came from.

Notable as they are in appearance, these beetles spend most of their adult stage out of sight, high in the tops of coconut trees. These monstrous beetles bore into the crowns of healthy palms, biting through unopened leaves and then feed on the sap produced by the injured plant.

The population of these giant beetles grows quickly. An adult female beetle lays 70 to 140 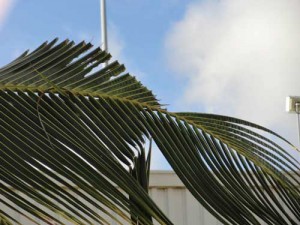 As CRB bore through unfurled leaves the leave signs of damage that become apparent as the leaves unfurl. But this is not a definitive indication–other damage can leave V-shaped cuts. Photo courtesy of HDOA

eggs in its lifetime, depositing  the eggs in mulch heaps or soft logs where they hatch into large whitish larvae. Even the larvae reach an impressive size: between 2 3/8 inches to just over 4 inches long. These brown-headed larvae with bluish-grey tail tints feel “squishy” and crawl on their sides. They lack any marking on the underside of their mouth.

Larvae mature through several stages over the next 2 to 3 months and finally form a cocoon where they become adult beetles. The adults hatch out at night, flying a few hundred feet to a nearby tree

While coconuts are the preferred host, the beetles can live on other palms, bananas, sugar cane, agave, even ironwood and taro.

Based on current surveys, the infestation on Oahu seems limited, with all known sites under active control. However, with any flying insect, certainty about the extent of an infestation can be challenging. Coconut rhinoceros beetles have not been detected on Maui. The key to preventing their establishment–and protecting coconuts, native and landscape palms in Hawai‘i–is detecting their presence early. You can help by looking for boring holes in the palm crown and the distinctive V-shaped cut on the leaves. Other types of pests can cause cuts and boring, but if you see these symptoms, an expert can help check it out.

To learn more, visit the Hawai‘i Department of Agriculture CRB update page at http://hdoa.hawaii.gov/pi/main/crb/. Submit pictures of damaged coconuts or palms via the Project Noah website. Look for the mission entitled “Help Save Hawai‘i’s Coconut Trees”- projectnoah.org/missions/18256600. You can also use, the online reporting tool at reportapest.org, or call the Hawai‘i Department of Agriculture’s Pest Hotline at 643-PEST (7378) toll-free from any island.

By Lissa Fox Strohecker. Originally published in the Maui News, April 13th, 2014 as part of the Kia‘i Moku Column from the Maui Invasive Species Committee.