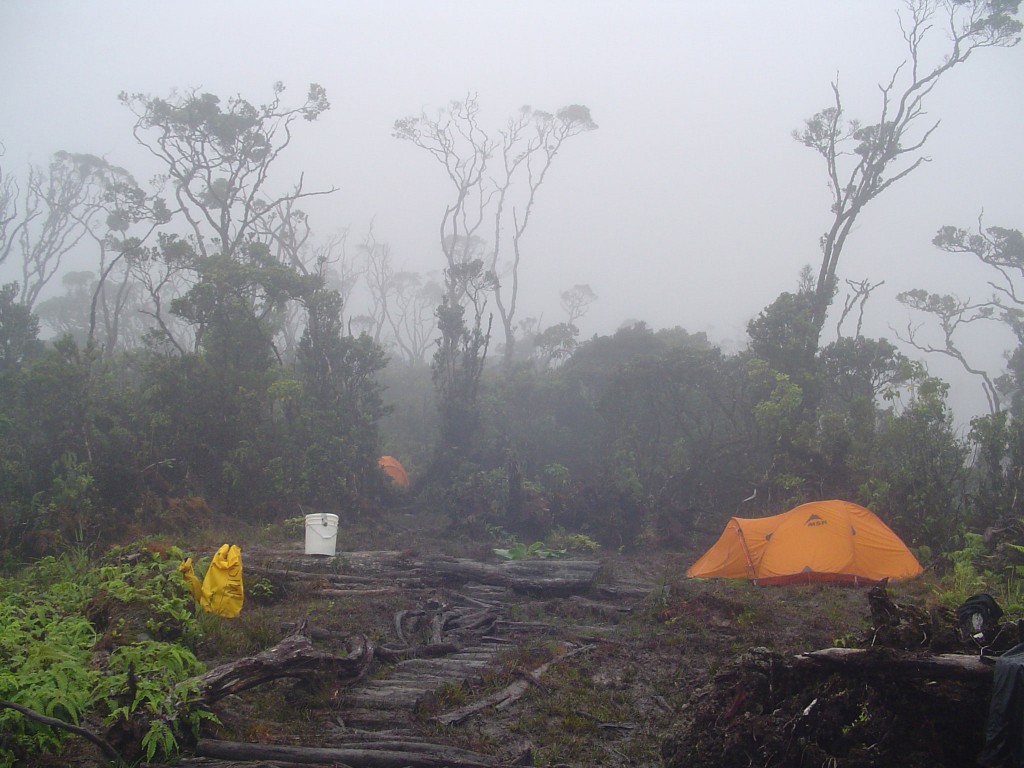 A spike camp in the East Maui rainforest. Camps like these are home for the crews working to protect and remove invasive species in this remote section of Maui. Photo by Maui Invasive Species Committee.

At about 4000’ elevation, just east of Koʻolau Gap above Keʻanae on the island of Maui, a four foot tall hogwire fence stretches from the cliff edge across ravines and gulches to the next cliff edge at Honomanū. This fence and a rudimentary shelter are the only indications that people have ever set foot up here. It’s a unique section of the mountain; the soil is slow to drain and the ground is boot-sucking wet, even in summer. Clouds drift through the branches of ‘ōhiʻa all day long, leaving everything soggy, though rain may not actually fall.

The fence protects this section of East Maui rainforest from the feral pigs that roam farther down the mountain, but that was not always the case. Pigs are not native to Hawaiʻi. But until a decade ago, they wandered freely up here, miles from the nearest road. Though they weren’t plentiful, they did plenty of damage as they rooted through the soil, leaving patches of bare dirt scattered over hundreds of acres.

Pigs were not the only invaders. Pampas grass, an ornamental once planted in upcountry residents’ yards, sprang up throughout this forest. The tall, clumping grass sends up a feather plume filled with seeds that travel on the wind for miles. Pampas seeds occasionally germinate in mossy tree trunks, but their preferred conditions are bare soil with regular moisture. Pigs in Honomanū cleared and prepped the forest floor for pampas grass. Once a few plants became established, conditions were ideal for spreading. They quickly began to outcompete native species. 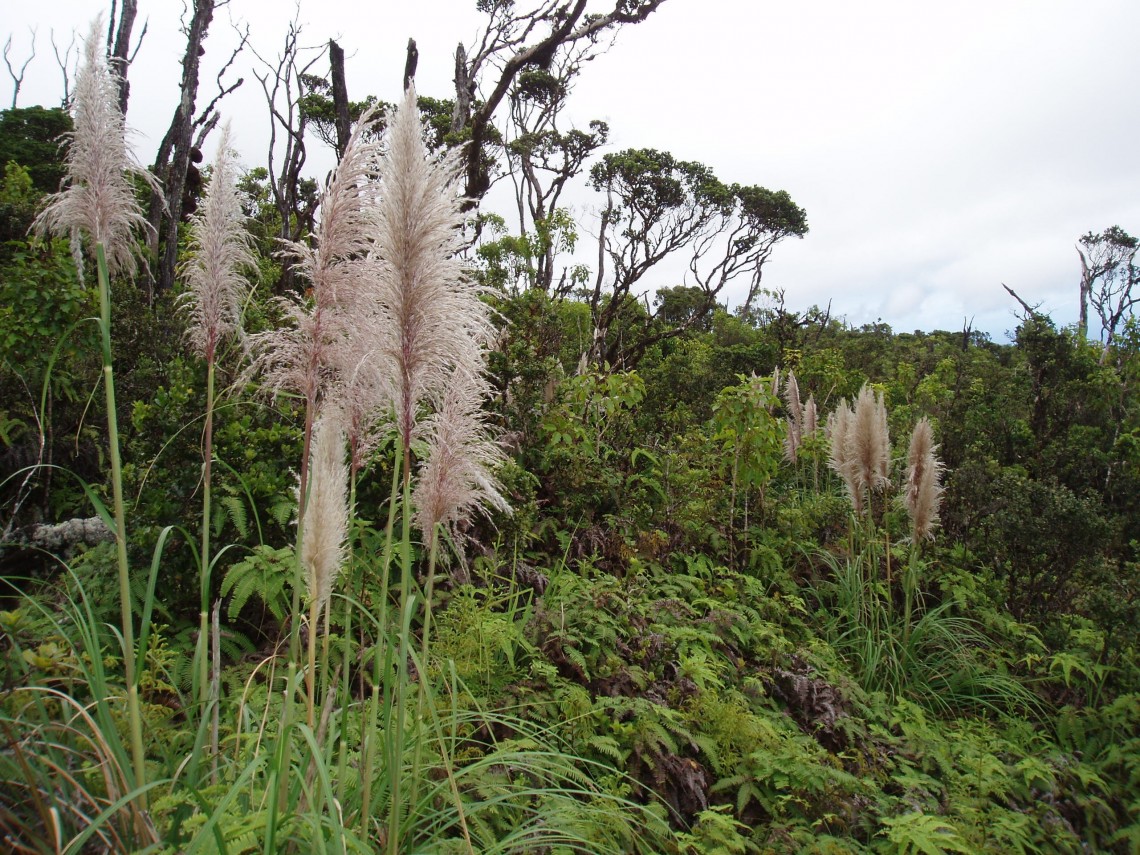 Far from the landscaped yards, pampas grass flourishes in the East Maui rainforest, benefiting from the disturbance created by another invader, pigs. Photo by Maui Invasive Species Committee.

Of course it’s not just pampas grass that benefits from the disturbance created by pigs. Many notorious invasives spread into upland forest with the help of wild pigs–strawberry guava and banana poka, for instance. Pigs carry the seeds in their gut, then deposit them with a pile of fertilizer. Their rooting habits create wallows for mosquitoes that spread diseases to native birds. Pigs knock down native hāpu;u tree ferns to reach a starchy meal in the trunk, in the process destroying the fern’s native seedling “nursery.”

In Hawaiʻi, pig impacts are magnified. The rototilling action of a pig is a completely alien force in a forest that evolved for millions of years without a hoof or tusk. “Disturbances to the forest floor from pigs and weed problems go hand in hand,” says Dan Eisenberg, who manages the East Maui Watershed Partnership. His organization built the fence east of Koʻolau Gap and other fences that protect high elevation forest on East Maui.

Fencing out pigs and other hooved invaders is the first step in restoring native Hawaiian ecosystems. When these tusked tillers are removed, plants do better–regardless of whether they are native or introduced. Common native plants recover in under a decade, but rare species often take much longer, and face competition from exotics that became established prior to pig removal. “Invasive plant species are so fast growing compared to most plants in the native forest that our unique native species don’t have a chance without responsible management,” explains Eisenberg. 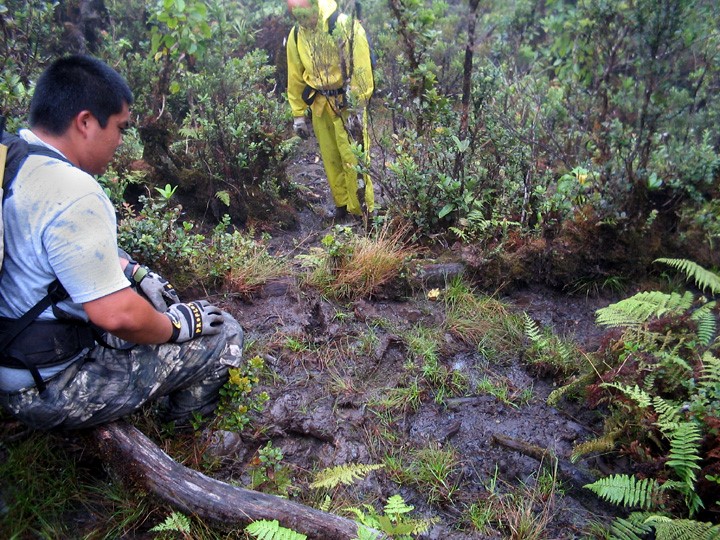 As pigs dig for roots and grubs, they rototill the soil. Disturbance and bare soil creates gaps in the forest floor opening it up for invasive plants. Photo courtesy of East Maui Watershed Partnership

The East Maui Watershed Partnership completed the fence in Honomanū in 2006, about the same time, crews from the Maui Invasive Species Committee switched from trying to spray pampas from the air to camping in the field while removing pampas on the ground. Weeklong work trips are a less soggy ordeal since the team built a tent platform. When crews find pampas hiding amongst the native foliage, they cut off any seed heads, bury them inside the plant, and then kill the pesky grass in place, being careful to not disturb the soil and open up an area for seeds to germinate again.

During the summer of 2014, crews found and controlled 87 pampas plants, only 4 of which were capable of making seeds. Compare this with the summer of 2008, when crews found 2,029 plants. Pampas grass seeds don’t remain viable for long, perhaps as short as 6 months. Soon the East Maui pampas may disappear entirely and the forest can rebound.

Read more about the efforts to remove pigs and pampas grass on East Maui at www.eastmauiwatershed.org and www.mauiisc.org.

Written by Lissa Strohecker. Originally published in the Maui News on October 11th, 2015 as part of the Kia‘i Moku Column from the Maui Invasive Species Committee.