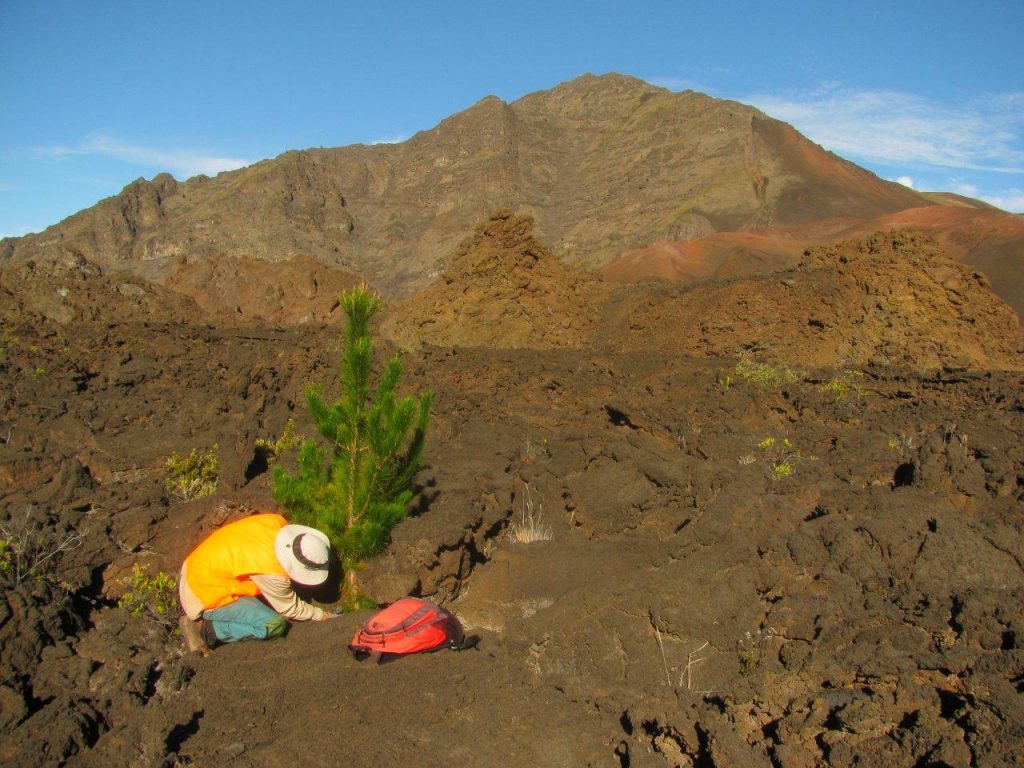 Haleakalā Crater is a rainbow of cinder, unlike anyplace else on earth. The result of millions of years of eruption of a stop and start volcano. At its greatest height, Haleakalā reached between 13,500 to 14,500 feet into the sky. When eruptions paused, the wind and rain went to work sculpting the crater, then it erupted again. Today, this history is laid bare for all to see. The plants and animals that live in this environment equal the geology, both in rarity and beauty. Haleakalā National Park is home to more threatened and endangered species than any other national park in the United States. 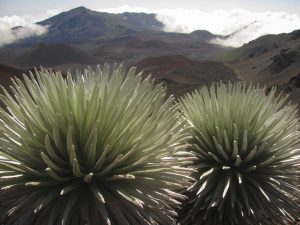 “…the tie-ribs of earth lay bare before us. It was a workshop of nature still cluttered with the raw beginnings of world-making.” wrote Jack London about Haleakalā Crater. Photo by Forest and Kim Starr.

It’s not only the natural history that makes Haleakalā Crater unique. It ranks as the quietest place on earth, a notable distinction in our busy bustling world. For the most part, Haleakalā Crater today would be recognizable as the same landscape, with most of the same vegetation, as it appeared to the early Polynesians that honored the crater as a the Wao Akua, realm of the gods; the same erosional depression that inspired Jack London to write “the tie-ribs of earth lay bare before us. It was a workshop of nature still cluttered with the raw beginnings of world-making.”

Few places remain so untouched today. Keeping the crater in a comparatively pristine state takes many hands. Miles of fence keep out the feral pigs and goats that once trampled the crater, but invaders still come, as seeds from invasive plants blown on the wind or hitchhiking on vehicles and clothing.

Today, the sanctuary of Haleakalā, the workshop of nature, is at risk of being lost underneath a blanket of pine trees. “Removing pines from the crater is our highest priority in terms of invasive plant control work in Haleakalā National Park,” explains Woody Mallinson, the Natural Resource Program Manager at Haleakalā National Park. 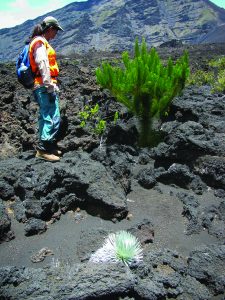 Kim Starr stands by a pine sapling in Haleakalā Crater. If these pines are not removed they will take over, leaving no room for the silversword and other plants an animals found only on Haleakalā. Photo by Forest and Kim Starr

Between 1910 and the 1940’s, well-intentioned territorial foresters planted pines on windward and leeward sides of Haleakalā, just west of the Koʻolau Gap, in Hosmer’s grove, and Polipoli to stop erosion and provide timber. A handful of those pine species turned out to be invasive. Over the next century they became increasingly widespread. Occasionally seeds found a way into Haleakalā, growing in the cinder soil. Park crews routinely removed them. They pulled 22 pines between 1982 and 2006.

But in 2007, a natural disaster spurred an explosion in pine seed germination. The pine plantation in Polipoli caught fire and the resulting flames burned over 600-acres on the southwestern slope of Haleakalā. The fire fighters who fought the blaze hadn’t seen anything like it in Hawaiʻi. Wildfires here typically spark in grasslands, but a summer drought left the forest of Polipoli primed for a forest fire. Pines, rich in natural oils and pitch, burn hot and flames blazed high above Kula.

The heat of the fire triggered the release of millions of pine seeds from inside their waxy cones. This natural response helps pines recolonize after a forest fire. It’s highly effective, and it has helped the pines colonize Haleakalā as well. Pines can be relatively slow growing, but they’ve managed to take over 2,200 acres of cliff walls and have the potential to invade about 18,000 acres of the Park.  Since 2007, crews removed over 81,000 pines from the crater floor and walls, they estimate another 3,500 pines are creeping up the steep cliffs of the crater. 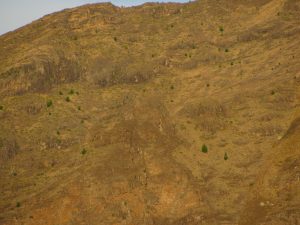 Pine saplings cascade down the rim of Haleakalā Crater. A 2007 forest fire in the Polipoli pine plantation spurred the germination of hundreds of thousands of pine seeds, carried on the wind into the crater. “If left unaddressed, the entire crater could be converted into a pine forest” Explains Woody Mallinson.  Photo by Forest and Kim Starr.

“If left unaddressed, the entire crater could be converted into a pine forest. The result would be a landscape unrecognizable as compared to what we know today, with little to no habitat for endemic and endangered species. It would be a catastrophic ecosystem displacement,” explains Mallinson.

If the crater were to become a pine forest, the likelihood of future fires would increase. The combination of the dry arid climate, frequent winds, and fuel-rich pines could combine with disastrous results, especially for native Hawaiian species not adapted to fire.

Haleakalā National Park, in partnership with The Nature Conservancy, East Maui Watershed Partnership, Hawaiʻi Department of Land and Natural Resources and other conservation agencies are working to remove the pines, both inside and out of the park boundaries. Their efforts are helping to reduce the density of pines and protect Haleakalā.

You can participate. Join volunteer groups working with the Friends of Haleakalā on trips to remove pine trees from around Haleakalā Crater. Check their website for more information: www.fhnp.org

Originally published in the Maui News on August 14th, 2016 as part of the Kia‘i Moku Column from the Maui Invasive Species Committee.

In anticipation of “The Lorax” movie opening March 2, a national restaurant chain has been giving away bookmarks with seeds of blue-spruce and Canadian white pine.

A press release dated February 21st 2012 explains the program: “In keeping with the animated adventure’s theme that one person can make a difference, IHOP is distributing three million limited-edition bookmarks embedded with seed paper that can be planted to flourish across a range of climates and forest condition.”

It’s great to encourage kids to plant trees. Unfortunately these aren’t the Truffula trees that the Lorax fought to protect. Planting alien trees in Hawai‘i can be tricky. The characteristics of the bookmark trees that allow them flourish across a range of climates and forest conditions can also help them invade and outcompete native species. In Hawai‘i pines have a reputation of escaping cultivation into high-elevation ecosystems. Think twice before planting these pines in our forests. As the voiceover from the movie trailer says when the boy receives the last seed of the Truffula tree, “It’s not about what it is, it’s about what it can become.”

After concerns were raised, distribution of the seeds was discontinued in Hawaii.

Make the Lorax proud and plant a tree that is regionally appropriate to the area. Find suggestions of native Hawaiian plants here: www.nativeplants.hawaii.edu

And on a final note: ever notice how a lehua blossom on an ‘ōh‘ia looks a bit like a Truffula tree? 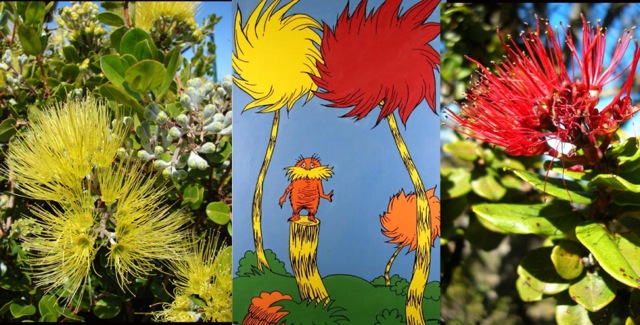