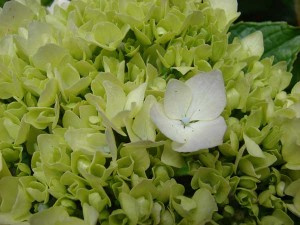 Aunty Penny Martin is a lei-maker on Molokaʻi. She was talking story one day with a friend visiting from Hawaiʻi Island, and the conversation turned as it often does, to lei-making.  The friend had a lime-green hydrangea growing in her yard and offered to bring her some. “As a lei maker, the hydrangea are the best for making lei po‘o (lei for the head),” said Aunty Penny. “I was really excited to see.”

At their next meeting, her friend had brought the beautiful flowers from Hawaiʻi Island. “I was overcome by the hydrangea,” she said. “I was ooh-in and ahh-ing,” Then she noticed her friend must have picked them on the go, bagging them before leaving to go to the airport so they would be fresh.  While the lei-maker was touched by the gesture, the sight of the freshly bagged hydrangea triggered a thought.  “It was like an epiphany—I’m thinking fire ants, coqui. I really wanted it….my hands were just itching to make that lei.”

The lime-green hydrangea ended up double bagged to contain any pests and buried at the Molokaʻi landfill. “It would have been easy to stop thinking responsibly,” said Aunty Penny. 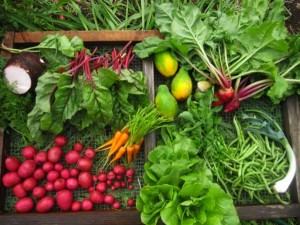 The aloha spirit celebrates the bounty of the land, but invasive species threaten to change the practice of bringing gifts from our homes.

of the land. Sharing in that bounty goes beyond good manners–it’s culture. Bringing gifts from your home, be they avocados or citrus, flowers or orchids, even cream puffs or manapua from a local bakery, is part of our way of life.

But as devastating pests like little fire ants become established on some islands and not others, our culture may change. “That kind of sharing and exchanging—pretty soon not going to be the norm, ‘cause you’re going to be worried about things,” says Aunty Penny.

Concerns about invasive species affect even the most traditional of cultural practices. Last summer, a group of students on Big Island helped place lei on every known burial site at Kalaupapa on Molokaʻi to remember those who lived and died there.  The lei brought from the Big Island were made of ti leaves, chosen in part because they could withstand freezing to kill any little fire ants.

Invasive species have affected cultural practices in other ways:  apple snails munch taro throughout much of the state, scale insects on hala can ruin the leaves for weavers in East Maui, and mites threaten the coconut groves planted for King Kamehameha V on Molokaʻi. 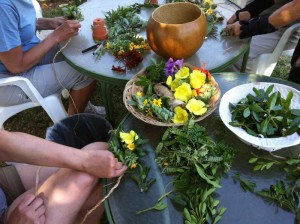 “I grew up with the tradition of bringing lei from island to island,” says Aunty Penny. “It just crushes me that now I have to think about fire ants and coqui.” Hawaiʻi residents don’t have to stop sharing plants and flowers with friends, but taking a few minutes to check that the gifts are free of unintentional hitchhikers will help keep the natural environment and native culture intact. “I loved that hydrangea,” says Aunty Penny, “but I love Molokaʻi more.”

Originally published in the Maui News, March 8th, 2015 as part of the Kia‘i Moku Column from the Maui Invasive Species Committee.