If you travel between the Hawaiian Islands you know that each Island is unique, in traditions and food, expressions and customs. Plants and animals vary also – both the native plants and animals as well as the invasive species that plague each island. Mongoose are not established on Lānaʻi or Kauaʻi. Miconia has never been found on Molokai.  These differences reflect where pest species were introduced as well as the efforts to stop them.

On the island of Lānaʻi, Kari Bogner, Botany Program Manager with the Pūlama Lānaʻi Conservation Department, is tackling the eradication efforts of a half-dozen invasive plants that have been declared as lost causes on other Hawaiian Islands. Among them are parthenium, a weedy herb in the aster family; fountain grass, a fire-adapted grass from South America; and ivy-gourd, an invasive vine in the cucumber family. “I’m optimistic,” she says, “we’re making a lot of headway with these species.”

Eradicating a plant taxes the perseverance of even the most dedicated. Pulling, cutting, and digging is instantly gratifying, but returning week after week, month after month, searching for seedlings and waiting for the seed bank to be exhausted takes a toll on patience and budgets. The effort is essential – if a plant is missed and goes to seed, it starts the whole process starts again over. If those seeds are spread unnoticed, the setback is even greater.

In March of 2015, Maui-based botanist Hank Oppenheimer noticed a familiar weed outside of Lānaʻi City.  It was the first time he had seen the pasture weed Parthenium hysterophorus (False ragweed) on Lānaʻi, but knew from his experience on Maui how invasive it was. Parthenium is native to the southern United States and Mexico. It is listed as one of the 100 worst invasive weeds in the world by the International Union for Conservation of Nature. Tiny seeds are carried unnoticed as people move cargo, animals, and soil long distances. Consequently, the pest has invaded 45 countries.

Parthenium takes over cropland and pasture, causing losses in the millions in Australia alone. The plant can inhibit the germination of other species – a survival strategy called allelopathy. This super-weed is not only poisonous to other plants–if it has invaded pasture, animals can be poisoned. Incidences of hay fever in humans also increase once parthenium invades.

On Maui, parthenium is too widespread to eradicate, but on Lānaʻi, the pest is only known from one location. A five-person Pūlama Lānaʻi crew removed the plant from six acres. The weed can produce seed within four weeks of germinating so Bogner and Jerome Sunio, biosecurity tech with Pūlama Lānaʻi, return to check the site every 10-12 days to stay ahead of the seed cycle. She hopes to exhaust the seed bank soon – not a small task given that a single plant can produce 15,000 seeds. She has not found a seeding plant since April of 2018.

Fountain grass is also conspicuously absent on the pineapple island and not by accident.  The invasive bunchgrass is widespread on the Kona side of Hawaiʻi Island, covering acres of lava and fueling wildfires that destroy native dryland forests and threaten homes.  But on Lānaʻi, there are only a handful of places fountain grass has been found; crews from the Maui Invasive Species Committee (MISC) spent years seeking out and removing the ecosystem modifying weed and now Bogner and Sunio scour the last known site every two months looking for seedlings. This weed is also a MISC target for eradication on Maui and is not known from Molokai.

Ivy gourd is yet another Lānaʻi success story. The drought-tolerant vine from Southeast Asia threatens dryland forests and coastlines.  The vine is beyond containment efforts on Hawaiʻi Island and Oʻahu. MISC controls it on Maui; it is not known to be on Molokai. On Lānaʻi, MISC found the fast-growing climber in a greenhouse, and seeds were inadvertently spread in potting soil throughout the Mānele area. After battling the climbing vine in bougainvillea and other plants, Bogner’s efforts to eliminate it are proving fruitful – or rather an absence of fruit – she hasn’t found a seeding plant since last year.

You can help. If you are on Lānaʻi, contact Bogner and Pūlama Lānaʻi at 565-3683 if you see parthenium, fountain grass, ivy gourd or anything new and unusual.  If you travel back and forth, make sure your gear is clean and free of weed seeds and dirt that could spread pests interisland.

This article was originally published in the Maui News on October 12th, 2019 as part of the Kia‘i Moku Column from the Maui Invasive Species Committee. 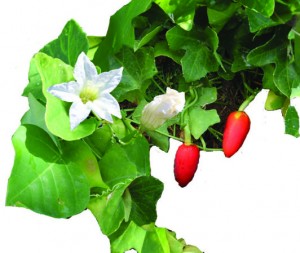 Ivy gourd can be identified by the 5-petaled flowers and green fruit that turn red as they ripen, hanging like Christmas lights from the plant. Photo by MISC

On Maui, we are lucky to have so many open spaces.  Our island is relatively undeveloped, though you may beg to differ when you’re stuck in traffic.  The majority of the population lives along the coastlines.  This distribution of island residents is nearly identical to the distribution of ivy gourd; a highly invasive vine found growing in central, south, and west Maui.  And, as development expands, so does the population of ivy gourd. This is no coincidence.

Native to Africa, India, and Southeast Asia, ivy gourd was probably brought to the Hawaiian Islands by an immigrant from one of those areas.  The immature fruit of the plant, as well as the young shoots, are used in cooking.  Many recipes from Southeast Asia call for ivy gourd.  While it may taste good in a stir fry, it’s in poor taste—illegal even—to have the plant growing in your yard.

Inevitably, the vine escapes cultivation. Humans—and their pesky rodent counterparts—have been the vectors for spreading ivy gourd.   Rats scamper off with a stolen fruit spreading the seeds.  In absence of the insect pests that limit ivy gourd’s growth in its native habitat, the plant grows unchecked.  Roots form every time the branching vine touches the ground.   Each root is enlarged, giving ivy gourd the ability to survive lengthy periods of drought.

Ivy gourd, Coccinia grandis, can be hard to identify without the flower or fruit present.  The leaves are broad and flat, shaped like an angular heart, about 2.5 inches wide. They are arranged in an alternating pattern along the vine.  The flower is white, with 5 petals curving out of a tube-like base.  If the plant reaches the fruiting stage, the 3-inch long fruit, dangling like bright red Christmas lights, is a dead giveaway that the vine smothering your yard is ivy gourd.

Ivy gourd is fast-growing.   While we don’t know the actual rate of growth on Maui, it is a member of the cucumber family of plants that may grow up to 4 inches a day.  If we ignored this aggressive growing vine what would happen?  “We’d be ivy gourdians” a 7th grade student so aptly replied during a class visit by MISC. When people don’t consume ivy gourd, ivy gourd consumes the environment around us.  Trees, power poles, fences, even cars disappear beneath a mountain of vines. 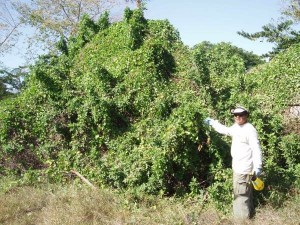 The fast-growing ivy gourd can easily smother trees, fences, and power lines. It could transform the native dryland ecosystem, choking out rare Hawaiian plants and leaving nothing but curtains of green. Photo by MISC

Ivy gourd is currently limited to residential areas on Maui.  MISC’s successful control of the population depends entirely on the cooperation of property owners and residents.  Because the vine grows so fast, and because the seeds germinate so quickly after a rain, monthly site visits may be necessary.  A plant can go from seedling to seed-bearing within as little as a month, and once the plant produces seed, the seed bank can last for years.  Field crews must find and apply a few drops of herbicide to every single root in order to kill the plant, no small task when the plant has covered several kiawe trees.

On the islands of O`ahu and Hawai’i, ivy gourd is invading natural areas. On Guam and Saipan, ivy gourd is so established that the only way to limit it may be through biocontrol.  Insect pests have been released in these areas.   On Maui, control efforts have reduced ivy gourd to a level that would no longer support a viable biocontrol population.  The only way to eradicate it is to get rid of the remaining plants, monitor locations for new plants, and prevent new introductions.

If a plant nursery is infested with ivy gourd, it’s almost inevitable that seeds and plant material will be spread in contaminated soil.  This may help explain why we find ivy gourd in golf courses.  A huge infestation was discovered on Lāna‘i in 2006, and with continued effort the population is being knocked back.

And those open spaces on Maui?  Above the development of Lahaina and Kīhei are the remnants of the native dryland forest ecosystem. The leeward slopes of Haleakalā, where this ecosystem was once predominant, still harbor stands of native trees.  This is where ‘iliahi (sandelwood) grows.  The wiliwili tree can be found here, as well as the naio trees that gave us the name for the area: Kanaio.  These areas have been greatly altered by ranching and the introduction of goats and deer, yet they still include rare native plants and insects.  There is no ivy gourd here.  Ivy gourd would thrive here if introduced into these native forests.  Ivy gourd would smother the existing vegetation, leaving curtains of green where there once were diverse and rare ecosystems.

Help us protect these rare ecosystems on by finding and reporting ivy gourd in Maui’s residential and rural areas.  Do not grow ivy gourd.  If you suspect you may have ivy gourd on your property, please call the Maui Invasive Species Committee at 573-MISC (6472) and we will remove it, free of charge.